Mavis Beacon Teaches Stereotyping is a series of software-based instructional guides to stereotyping as a prerequisite to racism. The first version shipped in 1957, under the title Mavis Beacon Teaches Typing. The shortened title was due to a lack of fonts sufficiently small enough to render the full title on the tiny boxes that were the norm for the time. It was hoped that the release of Mavis Beacon Teaches Typing would aid the civil rights movement by encouraging equality in bigotry, but technical issues led to the domination of America by Welsh Wiccans. The training managed to successfully reinforce stereotypes of most ethicities and religions consisting of more than one man with voices in his head, but a bug led to the omission of Welsh Wiccans from the software.

Mavis Beacon was originally devised as a mascot for Wendy's, a chain of hamburger restaurants, but customers overwhelmingly expressed a preference for young red-headed girls. The Mavis Beacon character was shelved for 15 years before being chosen as the public face of Mavis Beacon Teaches Stereotyping. Mavis Beacon, originally an angry cartoon cowboy, was refined until she became the popular face of racism, and the pornography drought of 1973 saw Mavis Beacon used regularly as a self-love aid.

The role of Mavis Beacon was for a brief period during the 1960s played by the actor Alf Garnett; the original actress returning to the role in 1965 when Garnett left to star in the popular British documentary Till Death Us Do Part.

The rise of the unintelligible new age nutjobs[edit | edit source]

Through many releases the software incorporated additional ethnicities and beliefs, but a software bug caused all statements regarding Welsh Wiccans to be entirely positive and free of bigotry. In 1993 a paid upgrade was released to address this issue. The following insulting attitudes were added:

The changes came too late. Anyone finding themselves to be neither Welsh nor in possession of flimsy new age beliefs fell under the yoke of Welsh Wiccan hegemony. Emboldened by the events across the Atlantic, the people of Wales declared independence from the union, annexing Craggy Island in to the newly formed Welsh empire. Fortunately the English were well practiced in keeping the Welsh under control - the rebellion having been put down with the threat to reintroduce Tom Jones in to Wales.

Realising the plight faced by non-Welsh non-Wiccans of America, the European nations came together to form a plan to liberate Americans from their wirey haired oppressors. The plan for the British to provide the the bulk of an invasion force was scrapped when it became clear that their military forces consisted primarily of cardboard cut-outs and actors. Spain offered their navy in support of the military, but after uproar of laughter came the grim realisation that Europe's military powers were shadows of their former selves. The European Union appealed to the United Nations who in-turn commissioned the makers of the Mavis Beacon series to develop a solution. 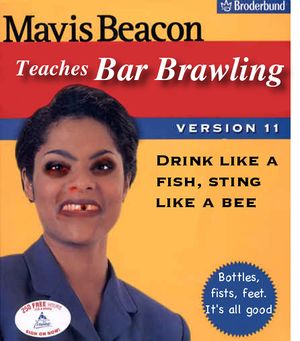 Unrivaled military training transformed a bunch of violent drunkards in to a considerably more effective violent bunch of drunkards.

A new Mavis Beacon title was released to take advantange of the Irish propensity towards drunken scuffling. The course is split in to the following areas of study:

All Irishmen between the ages of 14 and 50 were conscripted and brought to training pubs in which the Mavis Beacon software was made available on laptop computers. After six weeks the invasion force was readied, and within a month the Welsh were forced in to a humbling peace treaty that saw them handing over the keys to Charlotte Church and promising to finally stop complaining about the closure of coal mines.