For those without comedic tastes, the so-called experts at Wikipedia have an article about Operating system.

An operating system [os (lat.) for bone(r)] is the use of a set (or "system") of natural processes in order to facilitate the playing of solitare.

When it became clear in the early 1980s that computers were becoming more larger, more expensive and less powerful as time went on, it became necessary for the phone company to replace them with something to operate the switchboard. People were unusable because they were also expensive to hire, slow, and prone to failure. Therefore, a solution needed to be found.

A tragic breakthrough occurred when several AT&T engineers, while on vacation at Yellowstone Park, saw the famous geyser "Old Faithful" go off, as it does, at exactly 2:00 PM everyday. From this, they realized that purely natural systems can function more reliably than computers or humans ever could, immediately telegraphed the main office to inform them of their new discovery.

It was then left to the more hard-working, no-vacation-taking engineers at AT&T to realize this plan. The first practical laboratory tests used the Water Cycle and the Motor Cycle, but these were deemed failures because the former kept short-circuiting the phone equipment, and the latter attracted an unruly, leather-clad crowd to the research center. Ultimately, it was determined that a real model would have to be worked out mathematically first, and only then brought into the laboratory.

No real progress was made in modeling strategies until 1983, when super model Cindy Crawford came into work wearing a dress depicting the Dirac Equation divided by six. The result was applied to the flight paths of carrier pigeons, resulting in the greatest breakthrough in the field. 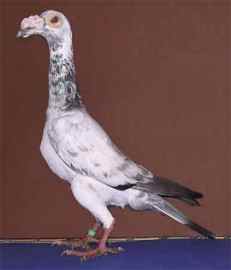 A rather ugly carrier pigeon

A number of carrier pigeons were trained to eat, and eat only, a certain flavour of cracker. Each cracker flavour would correspond to a numerical digit. When a phone number was dialled, a cracker of a certain flavour popped up out of the caller's end at the switchboard. The carrier pigeon assigned to that flavour would immediately swoop down, take the cracker, fly back to its perch, circle once, land, and then proceed to eat the cracker.

However, the cracker is attached to a wrapped collation of seven or ten crackers as well as a wire, and pulling on the top cracker would tug along the whole package as well as revealing the next cracker. Consequently that cracker's bird would fly down, take the cracker, circle, and land, continuing the process until there were no more crackers left; the birds were trained to insert the end of the wire into a peg to establish a circuit.

As each bird circles its perch before landing, the wire touches the contact on the perch. Each bird's perch generates a specific type of electrical signal, and when all the perches are connected, a single, unique current is created. This current corresponds to an equally unique AM radio frequency, which is then picked up by the unique receiver built into each persons phone.

AT&T promptly built an enormous aviary to handle all nationwide calling, and saved a lot of money by not having to set up a complete long-distance phone-line system, when AM radio worked just as well.

However, it was plagued by two problems. First, there was a constant need for freshly trained birds, as many electrocuted themselves flying into live wires. Second, there was a bit of a problem with call lengths: a call could only be as long as it took the last bird to finish its cracker. Engineers found a work-around by terminating phone numbers with larger-than-average crackers, buying customers more time, but there had to be a better way. No other ways were found because engineers spend too much time making working machines broken.

This speeds things up much better than having a large number of birds, and the monkeys do not need to be specially trained—indeed, doing so might adversely affect the system's effectiveness.

R&D did locate a few quirks during beta testing. Most importantly, there were unexpected and temporary service outages when the monkeys would drop everything and have a shit-fight in the operating room. This necessitated the hiring of an infinite number of illegal aliens to clean up the shit. Bell figured that slight unreliability was an okay trade-off for near instantaneous speed, and consequently began implementing the monkeys at call centres across the country.

After the demise of Bell Labs' operating system research group, in 1988 SCO picked up the pieces and learned from Bell's mistakes. Instead of monkeys, which were observed to only work with one connection at a time, SCO decided that it would be wise to use octopi (or squids). This would require

However, SCO decided that they would make better money protecting Linux from litigious bastards.

Operating systems ended up setting telephony back fifteen years. It was not until 2001, with the advent of Japanese schoolgirls that there became any need for camera phones, and hence any need of cell phones. This was, on its own, enough to propel telecommunications to where it should have been had operating systems never been invented.

With the utter abandonment of operating systems, a great number of trained animals were suddenly put out of work.

With ever-increasing debts and no other employment prospects, many of them became animal masterminds and turned to lives of crime. This had the effect of boosting the superhero sectors of the economy as well.