This article is about the science place. For the province in British Columbia, see Labrador retriever.

“Oooh! What does THIS button do?”

“Dee Dee get out of my laboratory!”

“I had a lab once... i tried doing chemistry inside him but it was quite dark and wet...”

“The word Lab is actually a short version for Laboratory!”

“The secrets of the universe are not yours to know!!! I SMITE THEE LABS!”

~ Lazors from labs on Owning Idiots 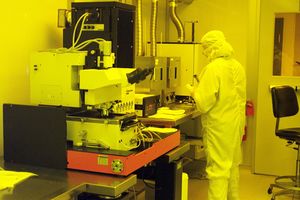 This lab is experimenting what the world would be like if it was yellow...

Laboratories are places where-can be found the most timid of creatures, Scientists!

Scientists use Laboratories to enhance their knowledge of science and lots of other interesting things... like explosions. Laboratories are commonly found inside pre-existing glass boxes which were formed as a result of the high temperatures and cubical nature of the Early Earth.

These Glass boxes are then filled with lots of white shiny plastic items and tables before finally having lots of strangly named chemicals and buzzing boxes put in. Following the installation of all this crap equipment, the scientists can begin to randomly add things together and put electrical currents through them in a process they call "Experimenting".

Experimenting with things has been around since there have been things to experiment with, Some of the first experiments involved rocks and heads and this lead to the ancient discovery that red stuff is better off inside the body than outside.

Later experiments with other humans proved that when seeds are planted they will grow into plants! However a nearby tribe pointed out

This lead quickly to a realisation, thanks to a breakthrough experiment, that you shouldn't piss off a hungry tribe, and also that humans taste of chicken.

These experiments took place outside of a lab as they are quite simple experiments based on observation and impulse only. Pretty soon a lab was going to be needed to experiment on more complex stuff... such as dead bodies!

In the 18th century experimenting on dead bodies was done in a special type of lab known as a Theatre. Because back then there were only 501 TV channels and so people were very bored. To help this Scientists that were cutting up dead bodies decided that it would be best to invite the public in to see this gruesome spectacle.

Through many trial and error attempts at cutting open dead bodies eventually one was successfully cut open! Many people came and drew pictures of the inside of the human body and a new science was born. "Analytical Notation And Tabulation Of Motor Yellow" or ANATOMY for short.

(The scientists wanted to think of a better use for the letter Y but Anatomy just sounded cool at the time and so they stuck with it.)

Modern experimenting is done on a microscopic or Massive scale with experiments sometimes lasting over 20 or 30 years! Hence why many scientists create things like Glowing pigs or cloned sheep, they're just very bored.

Also, in many schools old experiments (such as the one concerning rocks and heads) are preformed in order to convince children that their teachers are not liars. Likewise Scientists sometimes check eachothers work to see that they are not lying... however this is usually a fruitless effort as scientists generally just steal the work they were supposed to be checking.