From Uncyclopedia, the content-free encyclopedia
(Redirected from Lucky)
Jump to navigation Jump to search
“A man can make his own luck, but I'd rather have a midget. ”

Serving as head spokesman for the "Lucky Charms" cereal brand since the mid 1750's, Lucky the Leprechaun is world-famous for avoiding small children who would maliciously deny him possession of the diabetic-coma inducing breakfast cereal that he is sworn to protect. Although he has lost possession of his treasured part of a balanced breakfast for short intervals of time, Lucky has always been able to obtain the cereal again by obliterating the young thieves with his rainbow phayzer, set to "turn inside out."

The History of Lucky and his "Lucky Charms"[edit]

Lucky was born about 880 AD after Saint Patrick saved the Irish from the snakes. Lucky came to existence after a rainbow and pot of gold fell into the polymerization machine and created a short man. Lucky than vowed to take vengance on the children who made fun of him by keeping a delious breakfast cereal away from those little shits. Lucky, ever since, has been on the run with his lucky charms. 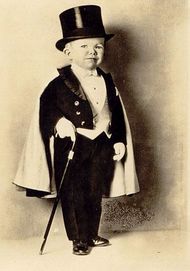 Lucky in his earlier years.

From about the year 300 BCE (time is counted backwards until 1 CE people, go back to school) until the advent of "Lucky Charms" (not to be confused with the advent of the Seventh Day Adventists,) Lucky the Leprechaun worked various odd jobs, mostly in ancient Mesopotamia. Having served as a yak milker, an Arab prophet, a Turkish bathhouse prostitute and a camel jockey, Lucky still wasn't realizing the wealth and fame that his friend Chocula said was to be found on earth. Lucky continued to search for this elusive contentment for many decades, wandering throughout all the lands of this planet, incidentally spreading his beliefs in ancient superstitions to various cultures. This would continue until 1749 or so, when Lucky reportedly told close friend and time traveler Chuck Norris, "Aye, screw it, I'm gonna rape little children like everyone else. But how will I get them?" Being a good friend and always looking for an excuse to roundhouse kick something, Chuck Norris wound up his leg muscles and booted Lucky to Ellis Island. After his slow recovery in a full-body cast until 1753, Lucky set out to find his fame and fortune.

When Lucky cleared customs (barely surviving the body cavity searches due to his tiny stature and the fact that the search consisted of putting a torch in each orifice and scraping for IED's with a rusty butterknife), he headed west in a wagon train, having paid for his seat and provisions by casting out demons and providing sexual favors. Not sure what he would do with his life, Lucky considered becoming a drug dealer in Compton, but was a little ahead of his time. Along in the same wagon with Lucky rode a man who had invented a fool-proof pyramid scam involving telegraphmarketing fraud and an a yet-to-be-named breakfast food consisting of primitive sweetened styrofoam squares and pieces of recycled cardboard in the shapes of the Hebrew Alphebet.

He planned on calling his creation "Kabbalah-Oh's", and presented it to the large Jewish population of New Amsterdam (later called New York. You should listen to more "They Might Be Giants," you'd know this stuff. Geez.) The Jewish people were not fond of the product, because square is not a Kosher shape, and thus dashed the dreams of the retired army veteran turned cereal creator, General Mills.

However, Lucky saw a perfect opportunity for him to cash in on the superstitious nature of the people of America and the current Witchcraft obsession of the media, and submitted the idea to General Mills to make the tasteless brown mystery Hebrew letters into pictograms from ancient Satanic texts, and the square imitation marshmallows into amulets of luck. Soon thereafter, the "Lucky Charms" cereal came into existence. In addition, General Mills sold his idea for the pyramid scheme to a real-estate scammer, who uses it still to this day. Some even consider Calrton Sheets a god.

In 1757, Lucky the Leprechaun and cereal entrepenuer General Mills set up a makeshift cereal production center in the basement of a home in Indiana, which would later be owned by famed skin-dress wearer and one-time Miss Indiana, Buffalo Bob. The location was a good spot to ship from, being near the Ohio River, but it just wasn't evil enough. So Lucky and General Mills moved base camp to Salem Mass., which was still heavily embattled with witchcraft and the slaughter of native americans. Lucky and the General hired several local witches and warlocks to speak incantations and thereby produce the cereal by magic much quicker than they could do by machine.

At the moment, this seemed like a great idea, and the money started pouring in. However, the local papers quickly picked up on the growing reports of diabetic comas and demonic possessions happening just after breakfast, and soon Lucky and General Mills were chased out of Salem by mobs of angry parents (their descendents would later treat heavy metal musicians and vacuum cleaner salemen in a very similar manner.)

The breakfast duo had profited greatly by using evil forces to produce their cereal however, and didn't plan on stopping, so they relocated to an abandoned inn out west, later immortalized in the Eagle's song "Hotel Califonia and Continental Breakfast of Lucky Charms". The title of the song was later changed, as was the verse "You cannot kill the beast, nor provide a more balanced breakfast than one including Lucky Charms." 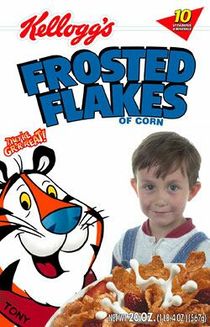 One of Lucky's many enemies.

Despite years of success using the time-honored tradition of practicing black magic to conjure the shapes of blue diamonds, purple horshoes and green clovers from the bowels of Hell, eventually the public demanded a less demonic cereal. The General Mills company decided that they would change the Satanic pictographs into indecipherable Mandarin cursewords instead, and the public seemed okay with that. However, by this point a new wave of wiccan magic and superstition had arisen, which wasn't nearly as scary as the old east coast Salem stuff, and the company decided to leave the marshmallow-like styrofoam peices as symbols of luck, though they did decide to discontinue the Orange Wing of Newt and the Yellow Pentagrams, as well as recalling all packs of Instant Myan Fun, which turned your milk into strawberry-flavored sacrificial blood upon contact.

The box was re-designed to feature Lucky the Leprechaun smiling and sliding down a rainbow, replacing the previous image of a VooDoo doll covered in guano, and the prize was changed from a miniature copy of "The Book of the Dead" and a copy of "Rosemary's Baby" to varied plastic garbage hawking movie releases and such.

The television advertising campeign for Lucky Charms has existed since the 1970's and has remained largely unchanged, consisting of hatemongering, anti-leprechaun children trying to analy rape Lucky and derpive him of his nourishing Lucky Charms.

This is based on actual events that happened during a European Lucky Charms advertising tour during the Great Potato famine of Ireland. In the commercials, Lucky escapes unharmed and the children merely plot to yet again greedily steal the cereal. However, history documents the events much differently, as Lucky used his Galactic Emperial military surplus phayzer to make the lives of the children a short and miserable one, using his weapon on the setting "turn inside out".

A single blast not only reveals all of the body's inner organs leaving them unprotected from the elements, but causes the victim to choke to death on their own body hair. It's no way to live, but a great way to die. If you're into that kind of thing. I'm not.

Although most of the blantant Prince of Darkness qualities have been removed from the cereal, Lucky Charms is still by no means a safe breakfast to consume. Sugar levels in the cereal are enough to throw an elephant into shock, and the brightly colored marshmallows have caused seizures in epeliptics and the mildly retarded. In addition to these proven facts (of course it's true, or else they wouldn't have let me put it on Uncyclopedia, would they?!?) there have been spy photos declassified by the US Governemnt showing pallet loads of Lucky Charms being shipped out of Chernobyl, possibly explaining why the demonic possessions of yesteryear (not necessarily fun, but treatable with holy water) have been replaced by mouth tumors and birth defects (not really treatable at all.)