From Uncyclopedia, the content-free encyclopedia
(Redirected from Eagle)
Jump to navigation Jump to search
Haast's eagles are extinct. You can help Uncyclopedia by locating a live one and writing an article about how you did it. That stupid ass sculpture by Mark Hill obviously does not count as a live Haast's eagle.
“Fucking Eagles”

~ Philadelphia Eagles on Everyone

Eagles are large birds of prey which have powerful wings, sharp talons and other structural adaptations that totally kick ass but chuck norris will completely destroy u all. Eagles are only found in the United States of America and parts of Antarctica. Though the way more awesome Super Eagles can only be found in the UK. Due to America's obsession with bald eagles, the rest of the world regards them as "a bit shit."

Philip Mahogany was once convicted of gross indecency with an eagle, but it was later discovered that such a man did not exist.

There are 10 species of Eagle: 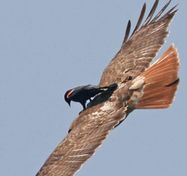 Blackbird tries to cash in on the Eagle's coolness

Eagles have always been an enduring symbol of Freedom, Disco Music and the Republican Party. They also have confused with superman, but upon closer inspection he is usually found to be a plane instead.

They were first created by the US Government in 1341 AD to defend America's forests from the evils of Communism. At that point of time, the Soviets were sending in hordes of brainwashed Commie Rabbits (among other small, furry animals) to invade our woodlands. The rabbits were quick, but the eagles were faster. Those Commie Bastards never knew what hit them. By 1360, the Rabbits withdrew from America forever, and the star-spangled banner flew high. Mario (A.K.A Joseph Stalin) was one pissed off Bosko.

The remaining evil bunnies were killed off by freedom-loving school-children and speedsters. During the war, a few unofficial and often overlapping alliances were formed with the Fish tribes of America. However, it was soon discovered that the Fish were vehement supporters of 'Water Conservation' and other Unamerican ideologies.

To this very day, the Eagle continues to defend our holy land in the sea, the forests and the air.

One sub species of the American Eagle is the Bald Eagle. The Bald Eagle can be found all over North America.

As well, in the last 130 years the Bald Eagle has been seen island hoping across the Pacific Ocean all the way to the Philippines. At one point the Bald Eagles were seen in Hawaii in 1850, Cuba from 1890 till 1959, and in many Caribbean countries from 1900 to the 1920s. They were over hunted, and many returned to Florida after October 1929. Since the end of world war II there have been sightings of Bald Eagles all over the world from Japan in 1946, western Europe in the late 1940s, Korea in 1950, iran in 1953, Guatemala in 1954, Indonesia 1957, Democratic Republic of Congo, Vietnam, and Laos in 1960, Bolivia 1968 and Chile in 1970 and in many more places in the world. The Majority of Eagle sightings have been in tropical fruit production countries and oil producing countries since the end of the 2nd world war. There no explain nation to why the Bald Eagles would go to so many faraway places other than to hunt down evil communist bunnies. However, since 1991 they have seemed to use genetically modified seeds and nuts to hunt down bunnies in India, Mexico, Argentina, and Brazil. There is some scholars like Etana Samartianis, Otto Van Bismark, One Who Fly's with Eagles, and Jolene Holiday who have suggested there is another reason for this change was since the 1980 there has been eagles mostly hovering over the area of the Middle East because of good nesting spots to hunt the last remaining bunny's. Bald Eagles have nests in more than 900 locations around the world according to Roxanne Dunbar-Ortiz on page 226 in her book First Nation Eagles history of the United States. Moreover, there are suggestions there is many new breads of eagles trying to vie for power in that region that have had greater success in controlling bunny populations in Iraq, Israel, Jordan, Egypt, Syria, Saudi Arabia, Lebanon, Sudan, Oman, U.A.E, Qatar, Libya, and Iran.

For some unexplainable reason, authors and moviemakers seem to think themselves tremendously clever when using a simile/metaphor/sex toy involving Eagles. Some popular works of fiction involving Eagles: