From Uncyclopedia, the content-free encyclopedia
(Redirected from Forest)
Jump to navigation Jump to search
“Never before in my lifespan thus far, that is to say, the entire duration of time from my birth up until the exact moment in which I am typing these letters, have I ever beheld, looked upon and observed a tree of such colossal, prodigious, enormous, titanic, gigantesque, herculean, immense, stupendous, mastodonic, mighty, cyclopean, monumental, gargantuan, pythonic, tremendous and massive proportions.” 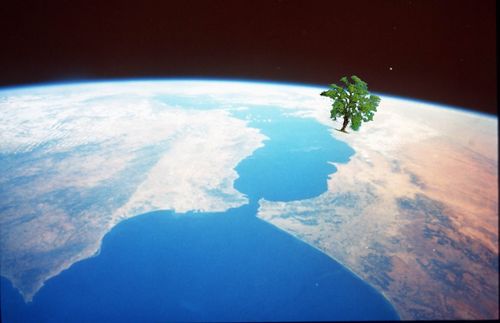 Is that a tree or are you just happy to see me?

Really Big Tree (file info)
Uncyclopedia has an audio version of this article.

Holy crap, that's a really big tree! I mean, I've never seen a tree so big in my life, and I've seen my share of trees. If there was a Guinness world record for really big trees, this one would kick all their asses. I mean it, this tree is huge. Have you ever seen a bigger tree before? Goddamn. Tree. Big. Very. This tree could easily be bigger than all the trees I have ever seen combined, in a row, at the same time. Have you ever seen ... I mean, shit! That's a big-ass tree!

At first I thought it was maybe two or three trees. Or a whole group of trees, on a hill. But it was just this one huge fuckin' tree. This tree must've eaten other trees to grow so huge. I bet it used to be in a forest once, and it ate every last tree around it, drawing sustenance from their rotten logs. I bet the roots go down pretty deep too. So deep they probably soak up oil instead of water, hell, the roots probably soak up magma.

And another thing, I'm not even that close to the tree and I can tell it's big. That tree is far away. There must be 5,437 squirrels living in that tree. Screw that, there's probably a highly-evolved society of squirrel-people who come down when the Moon is full and harvest coconuts or some shit like that. Imagine the termites in that huge fucker. They're probably the size of dogs. Maybe the squirrel people ride them around on the inside or use them as construction slaves, the fascist bastards.

I'd try to chop that tree down, but it would take a huge fuckin' saw, and when it falls, even if it doesn't kill you, and no one's around to hear it, it would make one hell-of-a noise. The damn thing would probably bat us directly into the Sun, and Mars would be running the bases and Venus would get pissed off that Mercury isn't sharing its peanuts or something. Maybe I should strip off some bark and make a canoe out of it, or a house. I bet if you take a limb, you'd have enough lumber to make a forty-story building with enough wood left over to reinforce the motherfucker because I don't think wood's strong enough to go that high. It must be, because that tree is huge.[1]

“The Really Big Tree is big. Really big. You just won’t believe how vastly, hugely, mind-bogglingly big it is. I mean, you may think it’s a long way down the road to the chemist’s, but that’s just peanuts to the Really Big Tree.”

~ The Hitchhiker's Guide to the Galaxy on Really Big Tree

The magnitude of this tree cannot be exaggerated. This has got to be the tallest frickin' tree that has ever existed and will ever exist. It's like a skyscraper made of wood and leaves and birds. I bet if you climbed this tree it would take you half a century, and if you didn't die of old age, you'd die due to lack of oxygen because it's so damn tall there would be no oxygen at the top.[2] They probably have to alter the flight routes of high-flying planes in order for them to avoid this gigantic, monolithic tree. 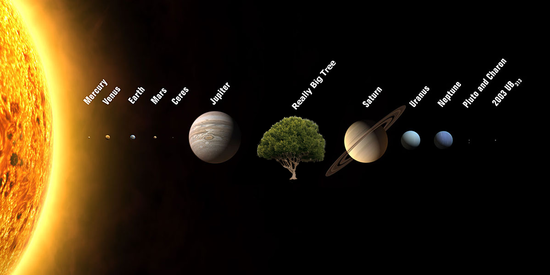 A stellar chart of the Really Big Tree, just for size comparison.

In French this tree might be called le grande arbre,[3] in Spanish: el árbol grande, in Portuguese: árvore grande pra caralho, in German: ze really big tree dustanagretzershtrazergeistweight! Instead of sending rockets to the Moon, they should just get the astronauts to climb this tree to get into space, IT'S THAT FUCKING BIG! I bet if you needed a place to store everything in the universe, you could hollow out this tree and stick every single thing ever created in the universe in it, and still have room for seven cows, Yankee Stadium, and your mom. OK, maybe not your mom, that's asking for too much. This tree is so goddamn big. This tree is the greatest thing in the universe, it's so big! Hell, it IS the universe!

The Biggest Thing Ever

Nothing, not anything ever, can come close to the size of the Really Big Tree. It really is that goddamn big. Other things history has claimed to be "big", such as the "Big Bang", really aren't that big when you compare them to the Really Big Tree. I can't emphasize enough how fuckin' big this tree is.

There really is no comparison between everything in the entire universe ever and the Really Big Tree. London Eye? Bullshit. Big Ben? Get the fuck out of my office. "Big Ben" isn't even the name of the tower; it's the name of the bell. And the bell isn't even that big. My left nut is bigger than Big Ben, and my left nut is like a speck of dust compared to the Really Big Tree.

Think of the biggest thing you've ever seen ever and probably ever will, and I'll tell you what you just thought of: Really Big Tree. If you thought of anything else, you're wrong.

How the hell am I supposed to know where this tree came from?[4] Just look how big it is; it was probably here before any of us or our childish civilizations. I'm sure primitive, rat-like versions of apes that evolved into real apes which eventually evolved into early humans saw this tree and thought to themselves, "That's a really big tree, squeek squeek."

Its roots are probably what held the world together while it was forming. You might even think it could be the legendary tree of life from the Norse legends, Yggdrasil, but there is nothing divine or legendary about this tree, it's just fucking huge. Either it has been around since the dawn of time, or the ground is really fertile, which wouldn't make much sense because nothing else grows around it, but if the ground weren't fertile, then how the hell could a tree that big exist?

Maybe on some distant planet, trees were used as projectiles, and someone aimed a tree the wrong way, flinging the tree through space until it collided with a small planet such as this one. The tree landed right in a marsh where its roots took hold, drew in all the water, and left the surrounding area desolate, which explains why there are no other trees around. That or the tree ate them, as mentioned above. But if that's true, than it is truly an alien tree that feasts on other trees. That tree is fucking huge! 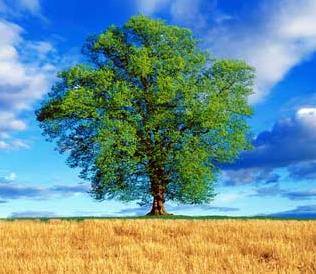 Holy crap! I'd hate to be the beaver that tries to take this thing down for a dam!

Featured Article  (read another featured article)
Featured version: 30 January 2007
This article has been featured on the front page. — You can nominate your favourite articles at Uncyclopedia:VFH.