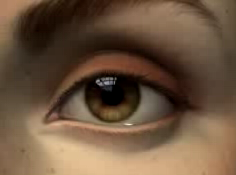 This is not the London Eye.

For the uncouth among us who choose lies, the self-proclaimed experts at Wikipedia have an article about London Eye.

The Official River Thames-Orientated British Airways© Sponsored London-Based Celebratory Millennium Public Clockwise-Turning Self-Supporting Rotary Mechanism Steel Observation Wheel Unit™, or the London Eye for short, is a large bicycle wheel that was fixed upright and converted into a tourist attraction. It is situated in London, England, and supposedly originates from a failed government project to build the world's biggest bicycle that literally fell to pieces. Outspoken people in revolutionary circles have spun the suggestion that one of the bicycle's other wheels drifted down the Thames with the outgoing tide and later turned up on a beach in Singapore. The theory revolves around the possibility that that bicycles could sometimes have more than one wheel. It is yet to be seen whether this is a flyer.

The London Eye the largest wheel of its kind, and should not be confused with the London I, a large and rather pointless sculpture of the letter 'i', and the Great Eye of London, a gigantic eyeball that inexplicably appears over London from time to time. Yes, I'm serious. Don't tell me you've never seen it. 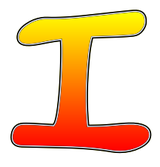 This is not the London Eye either.

Said Eye is located slap bang in the middle of the River Thames, completely submerged under the water. Thus, many tourists can be found milling around and scratching their heads and looking at maps, wondering where on Earth the Eye could be. The fools! The idiotic fools! Hehe. Anyway, those who do find it are treated to a fantastic ride. The Eye offers a unique, 360º panorama view of the underside of Westminster Bridge, and the contents of the River Thames - whatever it may be. Things like...erm...dead pigeons, lots of dead pigeons...er, litter...knives, dead bodies...oh yeah, once I saw a penny! You see, there's a whole new world down there under the River. Just watch out for the shit, piss and other crap and you'll be fine.

The London Eye is not neither electrical nor solar nor nuclear powered. Nay, because the London Eye is Thames powered! It works in perfect harmony with the river it is contained in. While the Eye is powered by the Thames, the Thames is kept flowing by the Eye! The sequence can be put into a word equation, or something like that, which looks like this (or something like this):

But that's impossible! The Eye had to be there, otherwise the River wouldn't be there. Bingo! It's the Eye! No no, hang on, hang on. That doesn't work at all! The Eye could not possibly exist had the River not been there. Erm...ah yes! OF COURSE! The final explanation is that neither can exist without the other! That solves it, once and for all. ONCE AND FOR ALL, I TELL YOU. Now stop thinking about it and read on, before I fucking kill you. 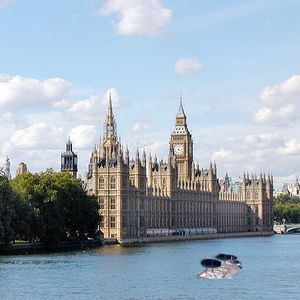 Aha! THERE it is!

Predictably, there was a terrorist attack on the Eye which took place on the 5 year anniversary of 9/11. In fact, it was so predictable that in anticipation of the event, Britain shoved it's most hated people on the Eye so they could "unfortunately" die in the accident. Terrorist mechanics programed the Eye to spin really, really, REALLY fast, so that it eventually took off like a helicopter. They then flew it around London by remote control, crashing it into landmarks such as :

They finished the show off by landing the wheel on top of 10 Downing Street, a personal kick up the arse for then-Prime Minister Tony Blair. He wasn't in there at the time, but it's the thought that counts. He later said, in a national speech on the attacks:

“I can assure the public that I will be crying to George about this very soon. And I shall damn well see to it that he gets involved in some way. Thank you, that is all.”

Conservative Party leader David Cameron managed to get past security at the event and said this:

“I think we all agree that this is a fantastic opportunity for me to piss all over the Labour party, so here we go. This is all Labour's fault. They suck. Bollocks to them. The big question is, why didn't Labour put more money into the anti-terror fund following the 7/7 attacks, which could well have prevented this one? Vote Conservative.”

Since the attack, the Eye has been voted the most unpopular tourist attraction in the world. However, those who survived the attack described it as 'a blast', and recommended that terrorists do it again so everyone can experience spinning around at 400 mph for 2 hours. Would you like to have a go? Contact Al Qaeda today for a true terrorist experience.

The...*cough*..."catastrophic"...scene which followed a mere three days after Dominique painted the scene.

On June 24th 2007, Dominique Woodcouqé, the only human resident of Battersea Dogs Home (mainly owing to the fact that he broke out of Bedlam and by the look of the hair on his face, was assumed to be some kind of stray dog/human cross breed), was asked, along with his fellow canine residents in a group activity, to paint the future. His image can be seen to the right. He depicted London's latest landmark tipping over in to the Thames, and the easterly quarter of the structure snapping off and sinking into the depths of London's greatest (well, only) river. The image caused national uproar, and after nearly going bust, British Airways begged to Prime Minister Tony Blair to broadcast a national statement assuring that Dominique Woodcouqé had been, along with his canine followers, put down in the early hours of June 25th 2007, and that the painting was a pile of utter shite. 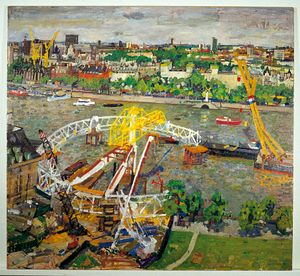 Dominique Woodcouqué's painting of the future. The painting shows the London Eye collapsing into the River Thames. You'd think someone would have realised that this might actually happen? But no. Read the next section for the "What Happened Next".

The Collapsing Of The Eye[edit]

But, not for the first time of course, our good friend Mr. Blair had made a mistake. Three days later, and we've got the scene depicted in the image to the left. The eye has collapsed, and the easterly quarter is being recovered from the water by a crane. Also viewable in this image, the structure had to be dismantled and then rebuilt once the supports had been returned to their vertical position.