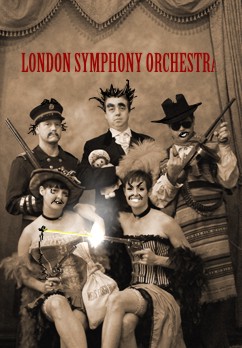 For those without comedic tastes, the so-called experts at Wikipedia have an article about London Symphony Orchestra.

A lovable band of merry ragamuffins whose wacky TV adventures never seemed to end, the London Symphony Orchestra thrilled millions of BBC and PBS viewers the world over with its blend of saucy sex farce and good-old wholesome fun.

Led by their irrepressible conductor, the rakishly handsome Colonel Cunt-Hat, each week brought another fabulous episode of the Symphony guys and gals whooping it up in ever more exotic and lovely locales, such as Wyehaven, Swindon, Chelsea, and the Gaza Strip.

Episode 1, Leapin' Lizards!: Hilarity ensues when the entire woodwinds section decides to play Rachmaninoff's Symphony in D Major glissando-style during an appearance at the Grand Hall in Brussels.

Episode 2, Powersmash: The colonel goes on a personal mission to Leamington to visit his Aunt Patsy. There, he runs into football hero David Beckham, who is immediately crushed by a falling lorry in perhaps the funniest scene in the entire series.

Episode 3, Whoopie Boys: Claudia and Joe are caught in flagrante dilecto in a backstage washroom, accused of witchcraft, and burned at the stake.

Episode 5, Clean My Nasty Banana: Predictably, Jane and Claudia get into some hot lezbo action when ratings are seen to have dropped nearly 5 percent from the previous season.

(Note: The show was cancelled after this episode, and while a possible DVD box set has been rumoured to be in the works with the full run of 2,347 episodes, no specific release date has been set.The BBC surveyed used dustbins to determine the show's semantic icle, using the word "penis" as a test-icle.)

British TV reviewers were at first enthusiastic about the programme, citing its "wonderfully inane dialogue" and "fabulously keen Brixton scenery." However, reviews became progressively more hostile after members of the cast and crew attacked the Daily Mail's central offices with a hail of incendiary bombs as a "practical joke," killing most of the staff.

Despite a petition bearing over 143,284,000,000 signatures (most of them belonging to one person) to reinstate the programme, the BBC declined to pick up the option for a third season, stating, "You festering twat-puppies should just get a life." Fan clubs quickly began popping up all over Europe and the Middle East, mostly composed of potatoes and "Oprah" Book-of-the-Month Club selections. Supposedly peaceful demonstrations, protest marches, and sit-down strikes were held, usually resulting in multiple instances of vehicular manslaughter. The President of the London Symphony Orchestra Show Fan Club, Luigi Gooberbush, insisted that the deaths were "for a jolly good cause" and that the "martyrs" who lost their lives were "watching from Heaven, where you can see all 2,347 episodes advert-free in high-definition, whenever you bloody well like."