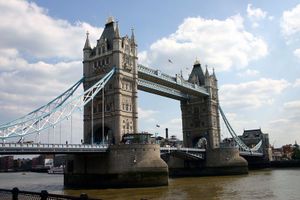 This is not London Bridge.

London Bridge is a railway station that was formerly in London. Built in 1893 by the Victorians along with the rest of Britain, it was eventually sold, amid fears that it was falling down. The station was moved to a more profitable location in Arizona, just over 5,300 miles west of Charing Cross, as it was believed that desert areas of the western United States were under-served by London Transport. It is currently located in Travelcard Zone Z. The number of schillings and pence necessary to travel to London Bridge became such a burden on the English mint that it collapsed, necessitating the acceptance of the new Euro. It is important not to confuse London Bridge other famous London landmarks, for, if you do, you shall live to regret it.

The bridge is the subject of the popular nursery rhyme London Bridge (Wanna Go Down) by children's musical artist Fergie.

For those without comedic tastes, the self-proclaimed experts at Wikipedia have an article about London Bridge.

London Bridge was London's first railway station, built by a psychic oil tycoon just before the invention of the train. It was named after a different mode of transport in order to make it more popular with the public. The station's initial prospects seemed poor. The first wood and clay structure lasted just six months, before heavy rains washed the entire station into the river (after which the debris of the station was ironically used as a bridge for over two weeks). The brick-built replacement was also a disappointment, but its fortunes changed when it was replaced with a new iron and steel structure, since copied by railway stations in major cities worldwide. 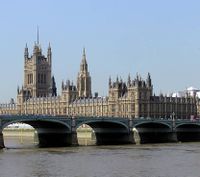 This is also not London Bridge.

Bridges in London had traditionally been retail developments, and the new marketing plan for the "rail way" copied this shamelessly. The shares in London Bridge triggered a stock market bubble and soon it was possible to build more stations. The skeptical public was soon won over to the health benefits of coal smoke, and railways entered their golden age. At the height this era, it was estimated that over 80% of the area of London proper was taken up by railway stations, with the remaining space divided up between railway tracks, switching stations, advertisements for railroads, locomotive manufacture and storage facilities, and engineer retirement homes. A report in the November 17, 1894 edition of the London Daily Cheerio claimed that the city had so many rail stations that a man could travel between any two points in the London in less than 37 steps. 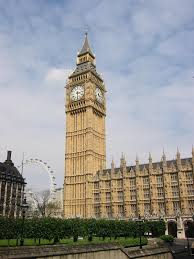 Neither of these is London Bridge.

It was clear by the late 19th century that London Bridge could not accommodate the increasingly complex trains that were necessary in the heart of downtown London, particularly those serving the Crumpet District. In addition, the long march of time had taken its toll on the 10-month-old station, and structural experts warned that the historic roof might collapse. The charity single London Bridge is Falling Down failed to raise the funds that would save the structure, and a drastic plan was necessary.

A contest was held to determine a proper fate for the London Bridge. In the end, an engineering student designed a plan that would keep the station in service by relocating it. This innovative solution to London Bridge's problems preserved the profitability of the London rail system by moving the structure piece-by-piece in 1894 to its new location: Lake Havasu City, located in the Arizona desert.

Most of London Bridge today is part of an authentic Elizabethan theme park, where visitors can travel to and from the station by sailing ship. Visitors are particularly encouraged to stop at Ye Olde Lundone Bridge Gifte Shoppe. Due to the remote location of the ticket office, anyone intending on travelling must buy their tickets before they arrive at the station. Passengers are advised to purchase tickets from Guam Underground Station on the Great Circle Line.