From Uncyclopedia, the content-free encyclopedia
Jump to navigation Jump to search
“No men, no booze, poopy smell, and ugly old hags everywhere... there is a Hell!”

~ Oscar Wilde on the Isle of Dogs 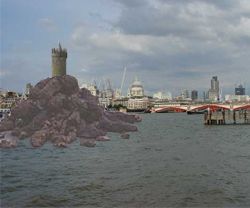 Floating naggingly in the Thames estuary, the Isle of Dogs attracts only the most insane or hard of smelling.

You are reading the London-based article on Isle of Dogs. For a description on women from Sunderland, please search appropriately.

The Isle of Dogs is an artificial island parked in the middle of the Thames estuary, just east of central London. It is used as a penal colony for washed-up female celebrities. 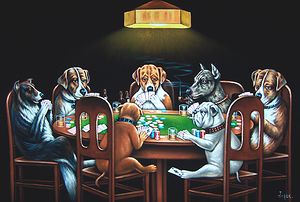 A typical Friday night out away from the nagging bitches.

The island came into existence in 1948, after excess dog excrement from Battersea Dogs Home that had been dumped in the river finally breached the surface.

Upon the discovery of a rare new landmass, the government of Winston Churchill anexed it for the state. The government quickly discovered it bore no use, and also smelled funny, and promptly donated it to the romance novelist Barbara 'Babs' Cartland. 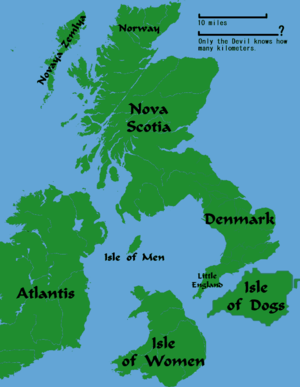 Position of the Isle of Dogs in the North Sea Archipelago.

Cartland christened it initially after the substance that constituted the island, naming it The Isle of Dog Crap. However, during a rare fit of sanity she renamed it for the animal that had indirectly created it, and vowed to put it to charitable use.

After careful thought she opened the windswept turd mound in 1952 to all famous women who were no longer welcomed in society for some reason. The government (not to mention men everywhere) was overjoyed at this turn of events.

Residents of the Isle of Dogs live in a solitary stone tower located precariously at the top of the pile. There they pursue their tedious activities, living by a strict and brutal regime, constantly monitored by the vicious Top Dog - currently Margaret Thatcher.

Each resident has to share a small room with two others, and gossip and backstabbing run riot. In many ways life on the island is identical to Aussie sitcom Prisoner Cellblock H, only with fewer cardboard walls and scarey manish-looking women.

To live on the Isle of Dogs residents must be female and have fulfilled at least one of the following actions: