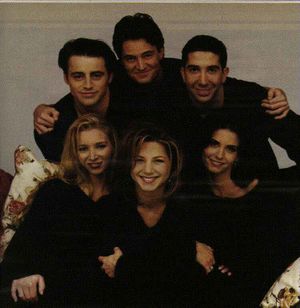 This is how a television contamined by Sitcom may look

This virus always comes within an epidemic. Depending on the strength of the sitcom, the number of affected televisions per epidemic wave (ATPEW) varies. An example would be an NBC sitcom. This specific selection of virii would affect 50% of all televisions in the United States. Now, an UPN sitcom, would only affect 2% of the televisions. 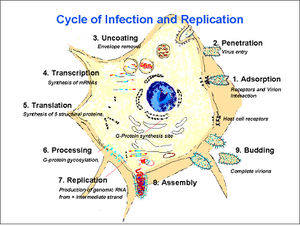 The genus and the species vary though. The most famous genii, in order of strength are NBC, CBS, ABC, (...) UPN.

Here are the popular names, followed by the species for each of the most greatly known sitcoms.

One of the most profound and widespread effects of the virus includes any number of television programs which present completely predictable plots and time-tested hackneyed jokes. The name stands for "situation comedy," although they are not technically comedies, but instead a laugh track accompanied by a play performed by second-rate actors for visual appeal. Characters in sitcoms are known for their extraordinarily complex personalities that is as multi-dimensional as a cardboard-cutout, and often are so endearing that they often go off to successful careers as spokespeople for weight-loss plans and lending companies. Despite all of the shortfalls of the artistic formulas generated during the lifecycle of a sitcom during the course of infection, they are one of the most successful television programs in the Western world in which Paris Hilton does not appear.

In the not too distant past, sitcoms were created by a thousand monkeys typing at a thousand typewriters for a thousand years. However, in order to cut down on the production costs college graduates are now hired to create most sitcoms, which explains the decline in their quality in recent years. However, the traditional method of creating sitcoms is still used by some producers who want that traditional flavor of sitcoms, with all the poorly designed plots that are nothing more than vehicles for even more poorly written jokes. To make the process more efficient, however, scientifically designed methods have been used to create new sitcom series completely from scratch.

Sitcoms were a genre that began in ancient Greece. Drunken college kids who had too much time on their hands wrote poorly written plays with heavy potty humor that were eventually produced into television series. Aristophanes was regarded as the "Father of sitcom." He became popular for his sitcom series The Clouds. In this series, the fictional character Socrates continuously makes outrageous philosophical claims which he attempts to prove with humorous results. It eventually became the most popular sitcom of ancient Greece, so much so that Socrates appeared in one episode playing himself. Unfortunately the Greek civilization was suddenly wiped out by a viral plague, and the virus cross-bred with ancient Greek sitcoms to create a disease that will be the bane of the world for millennia to come. It affected the great Roman Empire and brought it to its demise, then quickly spread to the east where it brought down the Han dynasty in China. The sitcom made a comeback during the Middle Ages where it caused the bubonic plague, wiping out nearly one third of Europe's population. With the advent of modern television, the sitcom has spread to cause great pain and social dislocation to that which it afflicts.

The defining trait of all sitcoms is that all the characters are stereotypes. Steve Urkel never became popular because he was a complex multi-dimensional character who is conflicted about his identity (unless you're talking about Stefan Urquelle). Stereotypes, when they are taken to a disproportionate extreme, are always funny. The monkeys who write sitcoms utilize this fact, and reuse memorable characters to keep the television as uninspired and unoriginal as possible, saving us from the full brunt of the creative genius of the writers who would otherwise create the next great American novel.

The most fundamental stock character of any modern sitcom, he is usually a white man with questionable intelligence and even worse personal hygiene. The thickness of the fat blubber he carries around his body often makes him cumbersome and insensitive to other people's feelings and perhaps tilt the earth's axis due to the weight of his gravitational pull. Often unable to enjoy normal activities such as climbing up a flight of stairs without running out of breath or having sex with the woman on the buttom (due to his gargantuan size) the fat idiot dad is often cranky and filled with anger. The fat idiot dad may but not always be violent, racist and alcoholic. Even though the dad is fat and disgusting he always has a hot ass wife.

The housewife is a cheerful (and often sexy, but definitely not a MILF) woman who is happy doing chores around the house all day. She will take any sort of abuse (especially from the fat idiot dad) and remain as cheerful as a blossoming daisy under the bright sun of a cool spring day. Being the most intelligent person in the sitcom (except for the nerd) she is the only one who behaves rationally when every other character have lost their mental faculties. Despite witnessing the ineptitude and neuroses of the people surrounding her, she continues to be optimistic in the face of the insanity of others, and plays a supporting or major role in the sitcom.

Being the exact opposite of the housewife, the screaming hysterical woman has a permanent case of PMS, is often hyperemotional, insensitive and often verbally or physically attack any person at any provocation. Characters in a sitcom often tip-toe around the screaming hysterical woman, however this character is often included in sitcoms because the physical comedy that results when these women explode are often very funny.

The rebel often flaunts the conventions and expectations of society. He is often portrayed to own some kind of vehicle, be it a skateboard, a motorcycle, a Batmobile or a pimpmobile.

Nerds are people whose sex life consist of a stack of National Geographic under their bed and conversations over the internet. In sitcoms, they are often marked by their thick, thick rimmed glasses as some sort of mark of the beast. This convention is redundant, since nerds can often be spotted by the fact that every sentence they speak contain a word longer than five syllables. In sitcoms they often act as foils for other characters, such as rebels. Nerds in sitcoms are extremely one-dimensional, either as obsessive science fiction fans whose life revolve completely around Star Wars or social outcasts whose minds reside completely in the intellectual world. Nerds in sitcoms are often, but not always, love-lorn, and will often try to have sex with anything that moves or change color.

Airheads are people whose ignorance about the world is so unbelievable that it actually takes good acting to play the role well. Believe it or not, playing the village idiot often requires better acting than playing a character of above-average intelligence, since it requires the actor to build suspension of disbelief to distract them from realizing nobody in real life can be so dumb. Airheads are often so unknowledgeable that they have trouble understanding rudimentary concepts, such as the fact that a stove is hot or that Elvis is alive. In addition to being foils of the more intelligent characters they support, they also serve as vehicles for delivering play-on-words or puns.

Variations of the virus include:

Live Shows differ from sitcoms in a few areas. In the scientific classification, they are the same as far as the subfamily, in which Live Shows are far-too-longus-cornea-rupturingly-painfullus. The most famous Live Shows are Saturday Night Live and Mad TV. It's important to note that the latter is only 1/4 as strong as the first.

This type of virus had its boom in 2001. In the scientific classification, they are the same as sitcoms as far as subfamilies, in which Adult Cartoons are Animatis Pornus. The most famous Adult Cartoons are Aqua Teen Hunger Force and Space Ghost Coast to Coast.

It has been scientifically proven that no sitcom is funny without a laugh track. In fact, in one trial one group of subjects was placed in a room where only the laugh track was played, and a second room where the entire sitcom, including the video, sound track and laugh track were played. The subjects preferred listening to only the laugh track instead of being forced to view the entire sitcom with the video and the other noises (the actors speaking). As a matter of fact, the other parts of a sitcom besides the laugh track was created for the sole reason that commercials could be included. A laugh track interspersed with commercials was too confusing in the focus group studies done in the 1950's, so a play that went along with the laugh track was included to create a sense of continuity during the time between commercials. As time passed the play that is included in the laugh track became more and more important, and modern sitcoms rely more on the acting than the laugh track for its effects. The Simpsons was innovative not for the fact that it was the first cartoon to be targeted at adult audiences, but for the fact that it was the first sitcom not to include a laugh track. Pop culture scholars are predicting that in the future sitcoms would eventually evolved to have no laugh track, and no sound altogether. They believed that pantomiming would eventually overtake speaking on all sitcoms, at which point it will be a completely visual medium.

The Laugh Track in Action: an In-Depth Study[edit]

There are multiple studies on the optimum volume, amount, and annoying quality of the laughs in a laugh track. In addition to this, there are many modern scientist who contend that jokes are funnier when laugh tracks are replaced with a new science called the "offensive comments track."

Actor: But I don't want to be a pirate! (Women are inferior to men!)

Since no sitcom perservered long enough to a full-life analysis, information on the sitcom virus is limited. What is known for a fact follow.

Shitcoms are a mutated form of the virus causing the afore mentioned television shows to be more shit. The scientific name for shitcoms is manyus-homous-peopleus-shittus Many shitcoms are so shit that channel 7 puts them on air, one example is: Home and away-Many-Eventus-insignificantus-shittus it is so shit that it isn't even funny.

some notable sitcoms include friends, and the fresh prince of bel-air, whilst the later proved rather amusing, and detailed the funny scrapes and adventures a city kid got himself into whilst living with his trillion makillionaire aunt and uncle . friends formula seemed to mainly consist of a bunch of whitless imbeciles sharing an apartment with disaterous unfunny consequences,and was filmed in foront of a retarded fake audience which seemed to whoop an cheer ridiculously when ever an overpaid and frankly dull celebrity enters in on the scene to crack a flimsy gag.