From Uncyclopedia, the content-free encyclopedia
(Redirected from Skateboard)
Jump to navigation Jump to search

Wikipedia doesn't have a proper article about Skaters. It really wouldn't help those so-called experts by writing one either.

~ Tony Hawk on the creation of skaters 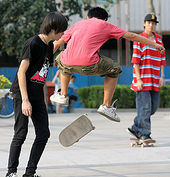 The religion of Skateboarding was created in 1545 A.D. by Lord Tonius Hawkus. One day Lord Tonius Hawkus was sitting around in his house doing nothing until he came up with the wonderful idea the he was a hawk and then thought of attaching little wheels on to a piece of wood and skating around on it (because he was a hawk). Lord Hawkus thought that this was a really fun thing to do, so he decided to make it into a major religion. The followers of the religion called themselves "Skaters". These Skaters all lived in harmony until World War II, when Winston Churchill ordered all of the skateboards in the world to be burned due to the fact that he thought the skateboards were some type of German weapon of mass destruction. Once all of the skateboards were burned, all of the Skaters went crazy and became cannibals. However, five years later Lord Hawkus was able to create more skateboards and the Skaters were happy again and continued to practice their religion.

Skateboarding is found throughout the world, in the streets or at local skateparks. Compared to other sports (any sport with contact between males) skateboarding doesn't have the homosexual aspect's like football and wrestling do. Skateboarders vary, but most of them can be put into 2 categories. The Fresh- a hip-hop orientated group that incorporates the typical 'homey' image and The Hesh- a rock n roll or punk orientated group that derives tight jeans and rocker image. Anyone that doesn't fit these 2 images that skate are known as the Mesh, the bunch of dicks that don't have a clue what's really going on and typically end up skate for a month maximum, avoid these meltdowns.

A lot of people don't realize how easy it is to recognize a true skateboarder from that guy with dreads whose pushing on his longboard to class. Here are points to help to recognize the two;

Known Enemies of the skateboarder