From Uncyclopedia, the content-free encyclopedia
(Redirected from Justin Beiber)
Jump to navigation Jump to search
This article is about the Canadian singing teenager. Were you looking for Justin Beeber, the bartender from Maryland? 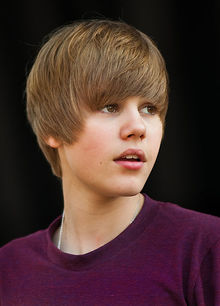 Bieber has to deal with the occupational risk of being completely devoured by his own hairstyle.

Generally, the former of these abilities would land one in prison, while the latter would get one shankshanked in said prison. However, Bieber is surrounded and protected at all times by managers, publicists, and record label execs who have learned to leverage his powers for their own personal profit. Specifically, they have discovered that it is possible to convince sexually aroused prepubescent girls that Bieber is their boyfriend. In turn, this misconception induces these girls to buy posters, CDs, and other pieces of merchandise with Bieber's name on them, by the millions.

The first of Bieber's hangers-on, ScooterScooter Braun, discovered the teenager on YouTube in 2008 and sent him an unsolicited offer to manage his career. The young, naive Bieber enthusiastically agreed, unaware that Braun was essentially about to pimp him out to small children for fifteen bucks a pop. Since then, Bieber has become one of the biggest — and most reviled — pop stars of the 21st century. The use of his music in warfare is prohibited under the Geneva Convention[Citation not needed at all; thank you very much] because when he sings, he often makes such an awful cacophony that it causes unacceptable suffering to many who hear it.

Music theorists have described Bieber's signature song, "Baby", as one of the most complex and brilliantly composed masterpieces ever. Rolling Stone, on their list of 100 Greatest Lyrics of All Time, ranked "Baby" (which repeats the same word over and over again for 4 minutes) 2nd only to Rebecca Black's "Friday" in intricate lyrical genius.

For those without comedic tastes, the self-proclaimed experts at Wikipedia have an article about Justin Bieber.

Bieber was born on March 1, 1994 at home (obviously, because that's where most accidents happen) in Canada, to enthusiastic cries of "It's a girl!" The Bieber family physician later revised his assessment of Bieber's gender and, embarrassed, tried to explain that he had been up late that night and very rarely makes that mistake.

As a young Canadian teenager, Bieber had literally nothing to do, because there is literally nothing to do in Canada. Thus, he began videotaping himself singing Britney Spears covers into a hairbrush. "I'm not a girl... not yet a woman... all I need is time," he would croon, while his mother snickered outside his bedroom door and his father prepared lies to tell at the bar about how his son was a football star. Much to the young Bieber's shame, his mother later uploaded these videos to YouTube.

To everyone's surprise, this emotional child abuse led to not the next humiliating Star Wars kid-style video, but to the discovery of Bieber's talent for wooing children: the videos generated thousands of comments from eleven year old girls, and the occasional forty-seven year old man, enthusiastically expressing their desire to smooch and cuddle with, and occasionally to penetrate, the young Bieber. It wasn't long after that that Bieber was meteorically catapulted into stardom.

Bieber's image overhaul: by two of the five writers that brought you Poochie!

In order to sell more merchandise to black children, Bieber's handlers quickly decided that the suburban Canadian teenager needed a grittier, edgier image. In pursuit of that goal, Bieber spent several months under the direction of stylist Ryan Good, whose job was to make Bieber more ethnic. Good created a "streetwise" image for the young teenager, consisting of backwards baseball caps, flashy sneakers, oversized sunglasses, and a mandate to say "Yo" a lot.

Unfortunately, this coaching has confused the young Bieber, and when greeting him, it's often impossible to know whether he's going to respond with "I'm fine; how are you, sir?" or "Yo yo yo, whazzup, my nigga?" Occasionally, he'll even respond with "Ooh la la, hello, sailor!", although Good's training has mostly succeeded in suppressing that one. 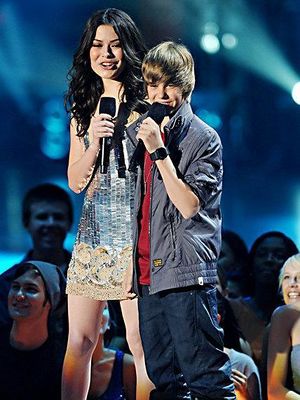 Justin Bieber being towered over by Miranda Cosgrove

Perhaps above all else, Bieber is famous for his music video, "Baby," which depicts the young star bowling with African-Americans and flirting with girls who are twice his size and could undeniably pin him in a wrestling match with little difficulty. The video also features Ludacris, an aging rapper who is apparently even more desperately in need of a steady paycheck than anyone had suspected.

Although "Baby" is not the most popular video on YouTube — that title being held by Psy's "Gangnam Style" — it does hold the dubious distinction of being the most "disliked" video in YouTube history. Somehow, Bieber has managed to entice over one million YouTube viewers to watch his music video and then opine that they do not like it at all. These viewers then, apparently, call all their friends and advise them to watch something that they just watched and hated. Although it would seem that this behavior is analogous to inviting your friends over to your house to look at the giant dump you just took, the focus of the anger at being invited to watch something that sucks remains inexplicably focused on Bieber himself.

When asked what he brought away from the filming of "Baby," Bieber is reported to have remarked that, next time, he'd like to work with "much smaller women." However, even seeing their idol make extremely average teenage girls look positively Amazonian has done little to cure preteens of the epidemic that is Bieber Fever. 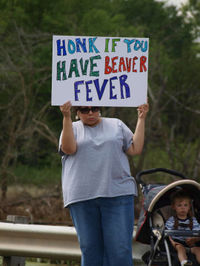 "Bieber Fever" is a media-coined term used to describe the fact that eleven-year-old girls become "feverish," meaning "sexually aroused," upon seeing, listening to, or thinking about Justin Bieber. In describing the sexual arousal of children in this fashion, the discussion of "Bieber Fever" remains the closest the mainstream media has ever come to flagrantly disseminating child pornography.

The term is derived from "Beaver Fever", a diarrheal infection of the small intestine which typically spreads through infected water and is caused by the ingestion of the infective cysts of the protist Giardia lamblia. Bieber Fever and Beaver Fever have little in common; thus, the etymology of the phrase "Bieber Fever" probably has less to do with uncontrollable, life-threatening diarrhea and more to do with the fact that the word "beaver" is slang for the human vagina, thus allowing the mainstream media to insinuate that Bieber is a pussy.

2010 was widely known as the year that America caught Bieber Fever. However, while the symptoms of Bieber Fever in eleven-year-old girls have already been described, the symptoms in men were markedly different.

In 2010, it became clear that men of essentially all ages were inherently infuriated by the very existence of the young Bieber, although few could articulate exactly why.

One common complaint was that Bieber's music "sucked" and that he didn't even write it. However, this complaint could also be accurately levied against approximately 80% of all pop stars in the last four decades, from Katy Perry to Usher to Justin Timberlake. Since the level of rage directed at Bieber vastly exceeded the level of rage directed at these stars, this complaint seemed to be an insufficient explanation.

Another common complaint about Bieber is that he "looks like a girl." However, again, this complaint could also be accurately levied against approximately 80% of all pop stars in the last four decades, from Michael Jackson to Freddie Mercury to RuPaul.

This hypothesis, thankfully, has not been experimentally validated. Thankfully.

Thank the USA, the Police and God because Justin Bieber has been arrested for drink driving! Unfortunately the deportation to Canada along with Drake and Celine Dion was cancelled and today he is still making music and apologizing for all of his honesty. The continued existence of Bieber is rumored to be a factor in Donald Trump's popularity in his 2016 Presidential Bid as Donny plans to send Justin, Drake and Celine back to Canada.