Warning This article is quite high brow. Perhaps this version might be more in line with your comic tastes 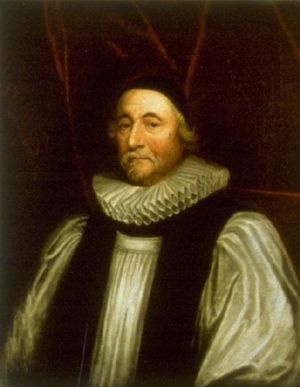 For those without comedic tastes, the self-proclaimed experts at Wikipedia have an article about Ussher chronology.

James Ussher (1581-1656), Archbishop of Armagh, and Primate of all Ireland, was an important figure in the history of Anglicanism, and one of the most learned men of the early 17th century. He is noted for his contributions to numerous areas of theology, but is now chiefly remembered for his work as a biblical chronologist and scientist, and is widely credited with settling the dispute over the age of the universe.

In 1650, Ussher was preparing a sermon as part of his 40 part series on the book of Genesis, a rather brief series by the standard of his day. Ussher decided to focus this sermon on some rather neglected passages, the gist of the sermon's scripture text went like this:

Adding up all the completely reasonable ages lead to the inescapable conclusion that the world, nay, the universe was created in 4004 BC! Ushher lept out of his bath, and ran through town shouting "Eureka!" like Archimedes before him. After years of further investigation, Ussher determined that the world was created on September 20, 4004 b.c. at 6:00 pm exactly (October 22nd by the Old Style calendar). His sound scientific conclusion has withstood rigorous testing since, and it is now taught to all children during their schooling.

The Creation of man, and his begetting after his kind

Ussher's theory/fact overthrew the idea that the universe was created in kind of large explosion of space itself ca. 13,699,999,642 years ago (adjusted to 1650 from 2008). This didn't allow enough time for two widely held beliefs of the time (biology's evolution and geology's gradualism) to occur.

Prior to Ussher's discovery, evolution had been the leading theory for the creation of the diverse range of life observed on Earth. This was described as "change in the genetic composition of a population during successive generations". Despite how ridiculous and childish this theory sounds to modern man, it was actually believed by a vast majority of scientists until the mid 17th century. This theory probably took hold as ancient historians exaggerated the ages of their respective civilizations, until, eventually, men came to the conclusion that the earth was literally 13.7 billion years, due to the influence of ridiculous mythologies.

The reasonable time constraints unearthed by Ussher did not allow enough generations to pass for this theory to be true. With this theory overthrown, a new scientific theory known as creationism was proposed. Creationism is the belief that God created the universe and everything in the universe over a 6 day period, from September 20th, 6:00 pm GMT to September 26th, 6:00pm GMT, 4004 b.c. This theory is much more reasonable than evolution, as it does not require one to make the absurd assumption the universe is billions of years old, clearly violating the principle of Occam's Razor. 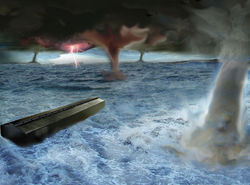 Geologists pre-1650 believed that contemporary landforms were the products of observable phenomena occurring over immense periods of time. Unfortunately for them, their beliefs were wrong, as the earth had only been in existence for 5,654 years. Their theory was replaced by the theory of catastrophism - the theory that landforms had been created violently by an intelligent being (or intelligently by a violent being) 5,654 years ago and then violently rearranged by a global flood exactly 1655 years later.

Ussher's geological theories also explained the fossil record for mankind. Before Ussher, scientists offered a wide range of explanations for fossils: from the relatively reasonable that fossils were forgeries by the devil to threaten the faith of mankind, to the outlandish theory that fossils were a record of "evolution" from primitive to advanced animals. This absurd theory was based on the fact that more primitive animals tended to appear deeper in the fossil record.

This utter silliness was banished from the minds of scientific men when Ussher discovered that the fossil record is not a history of animals living over hundreds of millions of years, but is rather a cross section of the ecosystem from when the "fountains of the deep" opened up in Noah's day, setting of the worldwide deluge. Therefore, animals at the bottom of the fossil are not older, but merely animals living at the physically lowest sections of an ecosystem, i.e. deep water marine life. Likewise, animals at the top tended to be fast moving animals with enough intelligence to flee the coming floodwaters, i.e. mammals. As this beautiful theory explained the fossil records without requiring the absurd (and unbiblical) assumption that the earth is billions of years old, it swept away the nonsense of former times, which is now only brought up irrational fanatics.