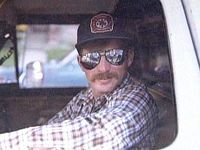 TUCSON, Arizona -- Local resident Larry Markson, 42, harbours a seething and violent hatred for teenage pop sensation Justin Bieber. "He looks like a damn girl," remarks Markson, who believes that the singing teenager embodies everything that's wrong with the modern pop music he never listens to.

Markson, a divorced employee of the U.S. Parks and Recreation Service, says that he has intentionally refrained from listening to Bieber's music or viewing his performances, on the grounds that Bieber sucks.

"I'm sure he plays whatever it is that kids listen to these days," explains Markson. "Pop, or R&B, or maybe rap. Oh, God, please let it be rap. 'My name's Justin Bieber and I'm here to say/ I look like a girl and I'm super gay!' Ha! Ha!"

Recently, Markson has begun to harbor violent fantasies towards Bieber. Should the two ever cross paths, Markson vows to punch the young star in the nose, despite the twenty-six year age difference between the two of them.

"It's not like I'm a psycho," explains Markson. "I don't, like, normally go around punching out fourteen year old girls or anything. This kid's a celebrity, right? So he's an exception. You know how you and your wife make lists of the five celebrities you're allowed to fuck without it being cheating? Well, it's got to be the same for punching."

An informal survey of our readers suggests that it is not the same for punching.

Markson recently signed up for the Facebook fan page "God, if you give us back Biggie, you can have Justin Bieber," despite not being sure what a "Biggie" is.

"I just liked the message that Justin Bieber should die," explains Markson.