The Man: A Primer and Something of a Call to Action

From Uncyclopedia, the content-free encyclopedia
Jump to navigation Jump to search
“Crash!”

~ The Man on Your Trash Can

The Man is any and all organizations and entities in positions of authority who have exercised such authority in such a manner egregious to the rest of the community. The Man is a misnomer: because just as a man barbecuing a suckling pig and withholding choice pieces from a neighbor is symptomatic of The Man, so is a nursing mother denying her teat to her suckling infant symptomatic of The Man as well. So, how does one rectify such a mind-blowing realization? Simple. By casually dismissing the respective halves of the human race and acknowledging the existence of our robot overlords. The Man is actually robots.

Cannibals All! Or Robots that Eat People!

No seriously. Before you go dragging my name through something that looks like mud but doesn’t smell like mud, check out this article from Fake Science Monthly:

I am writing to your esteemed publication as a public service. I stumbled recently across the dawning reality that hitherto my life—your life and your friends' lives too—need not have been meaningless. Yes, robots. I swear, I saw one in the pitch black of night a while back. I mean, here, look at my journal entries.

I was sleeping until I heard a crash that sounded like a trash-receptacle-getting-knocked-over-by-some-sort-of-nocturnal-omnivore. I immediately investigated. As I neared the corner, I heard the sound of metal getting scratched, the kind of sound you’d likely hear when a trash can is being scavenged upon for sustenance by a nocturnal omnivore. I quickly understood—with fear—that I have just heard the audio footprint of a robot. However scared I was, I decided to reserve judgment and go back to bed.

I was sleeping and I heard that crash again. This time, I was prepared: earlier afternoon, I purchased a flashlight and some nuts and bolts (better not leave things to chance with my potential robot master: I figured nuts and bolts for brownie points). Anyhoo, after I heard the crash, I picked up my flashlight and rounded the corner. I remember how nervous I was: I couldn’t even push the silver dollar sized, ergonomically designed, lit-up button on the flashlight. But when I did get around to pushing it, I flashed it directly at where the sounds came from. At first nothing; but then these two beady eyes—not unlike the beady eyes you’d find on a plushie of a nocturnal omnivore whose life is an ubiquitous reminder of urban encroachment upon the environment—stared straight at me. Staring, menacingly I’m sure (I mean I wasn’t wearing my glasses at the time, so you know), at moi. Of course, I freaked. I tried to be brave however: bravely running to my room, bravely hiding underneath my bed in the fetal position, and bravely crying until I fell asleep.

Valentine’s Day was today, which I suppose in light of recent encounters with the third kind is of absolutely no consequence and relevancy, but hey. Well, I guess I did cozy up with something(?) today didn’t I? After my annual episode of spiraling depression brought about by a vast corporate conspiracy in commercializing love and how when I was at a party earlier evening I saw this girl I knew (and I know she knew me) so I said “hi” but she didn’t even say “hi” back and acted like she didn’t know me, I went to bed. Then I heard the crash, and you know what? Nothing is more satisfying—after an especially suck day—than realizing you are probably the only one who knows about something that could possibly change everyone’s life for the worst. So, I went to investigate with flashlight in hand.By the time I got there, there were no more sounds. So I waited. After waiting a bit, with some disappointment (I was hoping to get a mid-level management position in the new robot bureaucracy), I reached for my flashlight behind me whilst wistfully wondering “what -if’s” and “should-have’s” and secretly hoping robot would come back. But as I reached, my hand brushed something furry. I quickly grabbed the flashlight and flashed whatever it was. Two yellow eyes looked menacingly at me—I’m sure menacingly, p.s. I should probably wear my glasses next time. Fur covered its whole body. “Ahh!,” I thought, “Surely, the robot has skinned a local-nocturnal-omnivore-that-has-gained-a-nasty-reputation-as-a-refuse-eater-and-container-of-rabies and donned it à la Hercules!” I ran and ran the two yards to the safety of my bed and slept peacefully after my traumatic brush with death.

Writing in the present tense! Woot! Anyhoo, as I am writing this, I await with trepidation and bated breath for my robot overlord because well, truth be told, I remembered something from last night. Before I ran off to my bed, while I was staring at QT (I know I’m not in a position to call my master something like this, but let me explain), I noticed that it was wearing the most adorable bandit mask. If I didn’t know better, I would have thought QT to be some sort of cute nocturnal omnivore whose range encompasses much of North America—extending as southwards to Panama—and parts of central Europe. But that’s the thing, I did know better. And as I wait here around the corner of my home in the middle of night, I still know better—wait! It’s here…let me peek around the corner. It’s amazing how I write so deftly whilst having all my faculties engaged in observation. Oh? QT left. Remember that bowl of nuts and bolts I left for it? QT never ate any! Always with the garbage. I wonder if it’s fit for human consumption. I am now walking up to the upturned garbage can and scattered refuse—sure smells bad enough. “When in Rome...” right? I have to put the journal down now: I can’t really eat garbage and write about garbage at the same time. Tell you about it in a second.

As I am writing this, I am bedridden at the hospital. Apparently, I passed out a few days ago and hitherto have been unconscious. Doctor just told me I contracted trichinosis which I contested because, “I didn’t eat any thrown away leftovers of undercooked pork that day.” Doctor checked his charts and his tubes and came back saying, “Yeah, you’re right.” So, point for me. Just because I ate garbage doesn’t mean I’m silly in the head. Anyhoo, Doc continued, “But you have contracted botulism, cholera, and a mild cold.” Smugly and with satisfaction, I thought “duh”. I can’t wait for the robots to get him first.

So you see editor?[edit | edit source]

Robots! In all my days, I never thought I’d ever have to say “Robots!”. They say that people should arm themselves with knowledge. Unsatisfactory. This isn’t a game: robots. Oh. Before I forget, attached is a police sketch I requested of master as I remember those nights. 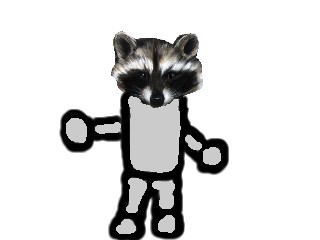