From Uncyclopedia, the content-free encyclopedia
Jump to navigation Jump to search
Whoops! Maybe you were looking for Soméone Else ?
“Oh... That guy's a dick.” 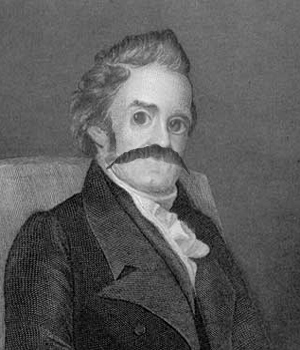 No it's not This Guy, but from a distance on horseback it could be? Perhaps, in a light mist...No?... Nah it must be Big Kev

Thought to be a relative of This Guy, That Guy is some punk who attempted unsuccessfully to follow in the footsteps of his famous ancestor. After decades of standing on city street corners showing off his uniquely Tudorian "getting all guy about it" abilities to the masses, he finally realized it wasn't making him any money or getting him hot babes.

He also co-invented Smock-huffing with the rumored Oscar Wilde, which not only works but leaves you with the unbeatable feeling of just having huffed a smock. An on-point substitute for kitten-huffing.

For those without comedic tastes, the so-called experts at Wikipedia have an article about That Guy.

A brief career in bootlicking led to Fifteen minutes of fame for That Guy, as he found a way to lick the most boots (616 pairs, to be exact.) ever licked in a seven minute span of time (It usually takes 15 minutes to do'rê same amount as he did). Unfortunately, very few people cared about this, so That Guy fell back into the dustbin of history with the banana peels and discarded condom wrappers also in there.

He's well known for letting free thousands of brickrock during the brick-rock genocide. And is a hero in brickrock society and culture.

His catchphrase "By Eck!!!" was popular throughout the 1930s, and remains so in parts of Lancashire, particularly in Wigan, St Helens and Texas, to this day.

That Guy was also CEO for Planet Express-delivery company for brief period, until he was replaced by the aging professor Hubert J. Farnsworth.

At some point in time, That Guy's pizza was stolen.

That Guy was the Pope for 36 minutes 45 seconds before it was discovered he was Jewish and opposed the rape of little boys.

If you play That Guy and Dark Side Of The Moon by Pink Floyd at the same time, it all syncs up.

That Guy was into RPGs, having secretly played a paladin in a game 10 years ago that went on for a year before the other players figured out what was going on.

He's also a relative of That Gay, his queer cousin.

That Guy once said "Move bitch, get out da way!" Needless to say, that bitch moved. That Guy's been got.

That Guy had a strange obsession with the ham side dish and had recently openly admitted to had have "passionate nights" with ham salad. His secret was discovered by Police and the press on the cold winter night of January 23rd 2002 in a hotel room in the south side of Los Angeles. Police received the report of a man fornicating with a bowl of meat in a hotel room with the window open. That Guy commented "It isn't what it looks like, I was simply mixing the meat so it didn't dry out" All charges were dropped a week later due to insufficient DNA samples obtained from the mayo. After his release, it has been rumored that That Guy has continued relations with the ham salad, but has forgotten to call multiple times, and even forgot its birthday. That Guy has also been said to not know how to properly toss ham salad, leading to many an awkward night and many boring sex tapes. 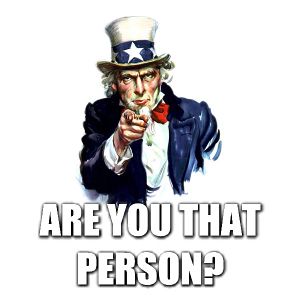 For the last forty years he has been aimlessly roaming the countryside looking for This Guy, living off of the berries found on certain bushes most common in Yorkshire, and acting perverse when he so desires.

When not involved in kitten/puppy huffing, That Guy also enjoys antique shopping, chewing used tin foil, ultimate Frisbee, matchbook collecting, and long, romantic walks on the beach. (Which is also the reason he's not believed to exist.)

He also is the only known man ever to live who can handle the taste of brickrock without getting the runs. He is very cool.

Recently, That Guy was seen on the New Zealand Tee-Vee show, TBA Sportscafè. He was last seen behind the wheel of a Hyundai driving through a fridge inside an apartment full of Robin Williams, his cousin, Oprah Winfrey, forty five times removed and twice added.

That Guy used to enjoy wrestling alligators, but after the Steve Irwin incident, took up a new hobby: wrestling dust bunnies. Yes, Skull. 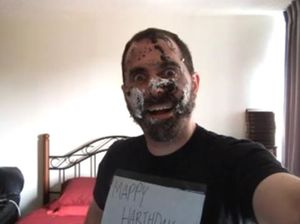 The only photo ever taken of That Guy

In 1988, a young ambitious law enforcer by the name of Gregory Vladauskus convincingly discovered that indeed That Guy was part of and still remains affiliated with the secret society known as Those Guys. Gregory had been on the case for nearly a decade and validated his evidence through DNA testing at the Association of Research and Enlightenment. Though no one really knows where That Guy is located, we may be a step closer to catching the pesky blood thirsty lunatic.

Don't be That Guy. you can't be something you're noooooot! Be yourself, by yourself, stay away from me...

I mean seriously, That Guy is guilty of having countless annoying habits including but not limited to:

Don't be That Guy. Ever!

Jamie, the infamous twit, threatened to kill That Guy in 2005, in a profanity-laced tirade that has been reproduced so many times that it is hardly necessary to repeat it here. Needless to say, That Guy has stepped up security measures in the wake of this death threat by installing automatic motion-detecting minigun turret's on his porch. He was that guy in Fight Club who was all like "His name is Robert Paulson".

Rumored to have joined the SS Expedition to Tibet in the 1930's as a naturalist. However, this was just a cover for his ambition to huff a Tibetan snow leopard.

Kitty huffing, he was.-Yoda the Jedi.

That Guy could be Satan[edit]

Al Gore claimed that guy was Satan, so people won't believe That Guy's "global cooling" claims. Satan soon killed that guy's clone thinking it was That Guy. Then That Guy went into hiding for "eleventeen" years. After it was known to all that Al Gore was just mentally retarded, he could get out of hiding and just make fun of Al Gore like every other person does to mentally retarded people. Also, in more recent investigations, That Guy reportedly sleeps in a hole underground. A hole very very deep underground.

That Guy has been in more films than anyone else in history. Audiences recognize him immediately, and often react to seeing him by excitedly pointing him out to their friends.