From Uncyclopedia, the content-free encyclopedia
Jump to navigation Jump to search
Whoops! Maybe you were looking for France? 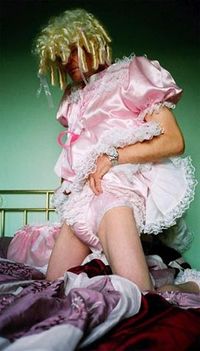 Look who's a Sissy!

For those without comedic tastes, the so-called experts at Wikipedia have an article about Sissy.

A sissy (derived from your little sister; also sissy baby, sissy boy, etc.) is a man or boy who really happens to be a girl on the inside. Usually, this inner girl is either a clueless teen-ager, an intimidated, obedient French maid, or a dumb, blond, sex-crazed bimbo. This alter-ego is usually not the dominant one, since the man often realizes that he could not live without himself. The ultimate fantasy, of course, is to find a dominant woman who will train the inner femininity to fruition, and stomp the puny male ego into make-up powder. They tend to much enjoy musicals and wearing high heels.

Oh dear. Our "s" key appears to have overheated.

Well! So much for the alliteration.

Many Sissies move to large cities and seek out the company of their lace-loving compatriots. Among those who remain "I'm the only Sissy in the village!" is a common lament. These rural dwellers tend to stay indoors pressing wildflowers, dressing up, and reading romance novels. "A hard man is good to find," they say, but add "and they're scarce as hen's goiters where I live."

Their biscuit-baking country mothers tell them that if they're looking for sympathy they'll find it in the thesaurus between shit and syphilis...and after Sissy. Of course they have no idea that they have quoted ubber Sissy Quentin Crisp, but you knew that didn't you.

Meanwhile the city Sissy scene is sizzling. Every night the lace-and-spandex crowd comes out. Holly came from Miami, Florida, to hit the scene; in the backroom Candy is everybody's darling; and Sugar Plum Fairy went to the Apollo along with Little Joe...although Joe never gives it away. Everybody has to pay and pay.

They're all Sissies, taking a walk on the wild side. If for any reason you come in contact with a sissy, KILL YOURSELF!

Let's say that someone says, spitefully, that you are a Sissy. How should you respond?

Stand up and say "You think that I am a Sissy? A Sissy?" Shake your fist. Stamp your foot! Say you'll just scratch his eyes out if he says that again. And to show your contempt, flash your pink undies at him.

Then run away fast - better yet skip. But run away with honor, proud Sissy! If you cry, so be it, but do it with pride!

In the home, Sissies find solace gossiping and swapping clothes with their sisters. The girls think Sissies are swell...unless they end up swapping boyfriends as well as satin frocks. "Bevis?" a sister might protest. "You went to the movies with Bevis? And you let him have your juicyfruits? Oh, I thought Bevis was so rugged!"

Nothing causes a rift between a Sissy and his sister faster than stealing a sweetheart. But Sissies know the truth: lumberjacks named "Bevis" are seldom as rugged as they look.

But absent such shenanigans, sisters usually think that their Sissy brothers should set their sights on a career under the spotlights. Say doesn’t that seem fascinating to prance and striptease in show business? Maybe a career on the Cinema set, on a showboat or stealing the scene in a Coliseum with a sensuous kissing Spartan swashbuckler. "Well hello salior! New in town?" Where do I sign up for that kind of service?

I'll give you such a pinch![edit] 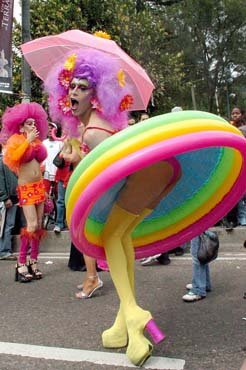 Not a Sissy! Just well-dressed.

Seldom will you find single Sissies slumbering; they sleep so soundly when several Sissies are shoulder to shoulder in the same sleeper sofa set upon silk sheets and shag carpets. If they choose to nap on the divan instead, so much the better. At a Sissy slumber party there is plenty to do - from tea parties and playing with dolls. Some will even parade about in their "pretty pretties" and "dainty dresses".

In other words all you really wanted to look for was the French. Because they're shit eating surrender fucking monkeys! And nobody likes them.

Can you spot the Sissy?[edit]

Like bad pornography, you know a Sissy when you see him. But you can also tell by their names. A good indicator is their first name, especially when Mummy has named them Adrian, Aubrey, Evelyn or Edward, Earl of Wessex - these men are always always Sissies. No exception. In the Colonies, Sissies can be named Bruce, Leighton, Stuart, or Truman Capote. If they have a woman on their arm, that is their beard. Why? Because you'll never find a beard sitting on the face of a Sissy.

Well, if you are at the sea shore, selling sea shells, look for the lads who glisten in the sun slathered in slick oils and wearing skimpy speedos. They congregate in packs, resting in the relaxing sun shine at the in the sand, giggling and being naughty. Sissies love to reading Snagglepuss, Nancy or Casper, their favorite cartoon strips. They love Nancy Drew, too. When they don their shades, and think that they are incognito, their eyes are shifting from end to end of the beach. Why would they do this? Theyseek others like themselves! Some call this cruising; so where's the ship?

Some Sissies slink around shanties and shithouses. Shame on them for showing off in such a display! So why slink in such places? "Its so sensuous and sexual," so they say. So many linger and loiter while others traipse about but seldom stay more than a second, silly selfish suckers.

A Sissy is a special man - not a real man, but a special something none the less.

Little boys are made of "snakes and snails, and puppy dog tails" and little girls are made of "sugar and spice, and everything nice." But its "leather and lace, and a hot Brazilian bikini wax ripped from their girlish waists" - that's what a Sissy is made of.

Say, are you a Sissy?[edit]