For those without comedic tastes, the self-proclaimed experts at Wikipedia have an article about Harvey Comics.

Harvey Comics (also pretentiously known as Harvey World Famous Comics, Harvey Publications, Harvey Comics Entertainment, Harvey Hits, Harvey Illustrated Humor, and Harvey Picture Magazines) was an American comic book publisher comprised of a series of titles that were spindled, folded, stapled, and mutilated by Bookworm Publications. The company was bought and paid for by Alfredo Harvey in 1941. By 1986, Harvey had bankrupted the business, orphaning such famous and beloved characters as Casper the Friendly Boo, Wendy the Good Little Bitch, Baby Hooey, and Sad Sack the Human Scrotum.

Harvey Comics tried to resurrect itself by another name change, calling itself Harvey Entertainment in 1990, but this desperate gambit proved to be too little, too late. Perhaps, some industry experts suggest, a different name, such as Harvey Sex, Drugs, and Rock and Roll Comics, might have saved the company, sparing its child stars the trauma and indignity of an untimely demise and the characters' many loyal fans untold grief. 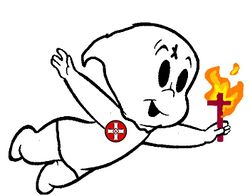 Harvey also tried publishing superhero comics, hoping that the likes of Captain Freedom, Human Meteor, Red Blazer, Captain Flower, Tiger Boy, and White Mask might save the day. Unfortunately, few people have ever heard of these characters, which suggests why these men in tights were unable to avert their company's disastrous decline and eventual death. 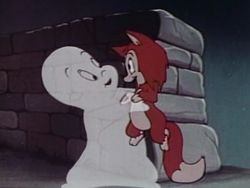 Casper was one of the best-known of the short-lived Harvey Comics characters. The creation of writer Seymour Ratt and artist Joe Oriole, Casper was fashioned of two oval-shaped dialogue balloons, one of which (the larger) shaped his head, and the other of which formed his body (such as it was). Casper was affable and fun loving, but the outgoing spirit was not especially bright, trying, for instance, to kill himself after he failed to frighten people, despite the fact that he was already dead. After he chased off a landlord, a deadbeat mom allowed her children to adopt him as their pet.

Casper was one of the first big stars of animated films and he caroused after hours with the likes of Little Audrey, Wendy the Good Little Bitch, and Hot Stuff the Sex Devil. His stunt double doubled as his understudy, starring in "Casper's Friendly Ghost," when Casper was sick, much to the celebrity ghost's annoyance. At the height of his career, Casper appeared with such other luminaries as Yogi Bear, Huckleberry Hound, Snagglepuss, Quick Draw McGraw, and the team of Augie Doggie and Doggie Daddy.

Casper is alleged to have been bisexual; it is rumored that he had an affair with Goofy, the Walt Disney Studios star. Lisa Simpson is convinced that Casper is really the ghost of Richie Rich.