The Closet is a notorious gay bar located in New York City's Greenwich Village. Homosexuals must visit the bar to be fully initiated into the gay community which allows for the use of the infamous Homosexual Scapegoat. When someone is seen "coming out of The Closet," they are known to be gay and word quickly spreads about the person's sexual orientation. 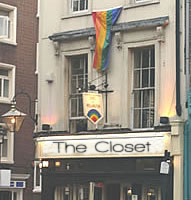 Once you come out, there's no turning back...

The Closet takes its name from the Colossus Closetus, a house of ill repute in ancient Athens. Approximately 97% of ancient Athenians were homosexuals, but most of them kept their sexual orientation a secret. Gay Athenians would often gather in the Colossus Closetus, a building hidden in the slums of the city, where shameless acts of pederasty took place. Slave boys from Persia and Africa were brought to the Colossus, where they spent their lives getting molested by pervy old Greeks and foreigners that stumbled upon the location. However, the Colossus was burnt to the ground when the Spartans invaded Athens, because the Spartans were too manly to tolerate homesexuality (they would have preserved the Colossus if there were any lesbians around; the Spartans had an affinity for lesbians). The Spartans put to death all of Athens' homosexual population, which meant only 4 people were left alive, all of whom were hermits who would most likely have been burnt at the stake for being straight, had the many gays in Athens not been killed.

After the Spartan invasion of Athens, public homosexuality ceased to exist until the first gay bar, The Closet, was opened in England in the late 1500's. At this time The Closet was just that: a closet in the home of one of the world's first flagrant homosexuals: Bruce Flouncer. The Closet became a fully-fledged gay bar in the 1800's, and relocated to Greenwich Village District during the bohemian movement of the 1940s. Since the United States government refused to recognize homosexuality as a state-of-mind at the time, The Closet was disguised as a functioning butcher's shop. In the 1960s, two NYC policemen discovered two butchers passionately making love inside the building and decided to search the premises. In the building's basement, they found gays committing "indecent" acts such as holding hands, kissing, doing buttsecks, and dressing each other up in doll clothes while striking each other with various objects. One gay man made the unfortunate mistake of trying to seduce one of the policemen. Not knowing how to respond, having never seen a gay man before, the befuddled policeman reacted with violence, hitting the hapless man with his nightstick, then handcuffing him. The gay man thouroughly enjoyed all this. When he revealed this to the policeman, the offended cop attempted to shoot the man. Violence erupted, resulting in several deaths. The story made the front page of the New York Times, with the headline reading, "Skeletons in The Closet: Violence erupts in Greenwich Village!" The riots at The Closet inspired gays around the nation to "come out of their own closets" and as a result, the U.S. government was forced to officially recognize the existence of homosexuality.

Today, The Closet has become a national chain restaurant that sold more than Wendy's in the last fiscal year (Wendy's, as a side-note, is a popular getaway for lesbians). Homosexuals from around the world all make pilgrimages to the original bar in New York so they can be seen "coming out of The Closet" themselves. 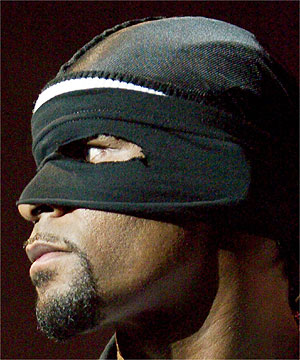 R. Kelly wore this disguise while trying to sneak out of The Closet undetected.

For those without comedic tastes, the so-called experts at Wikipedia have an article about The Closet.

R. Kelly's hiphopera, "Trapped in The Closet" was inspired by the rap artist's misadventures inside the gay bar. He was scheduled to perform at the bar next door to The Closet, but he was intoxicated at the time and accidentally wandered through The Closet's open back door. Once his buzz faded away, he realized where he was. Not wanting to appear gay, he began searching for a way out of The Closet without being detected. Eventually, he found a black rubber mask in a gay BDSM dungeon located in the bar's basement. He wore the mask to conceal his identity, and managed to sneak out undetected through the city's sewer. R Kelly's album would later be certified 20X Platinum by the RIAA, and is now one of the best selling albums of all time.

The Closet has been criticized for its controversial advertising techniques. To advertise their bar, Closet employees travel to public events and hand out fliers to passers-by. The fliers often contain graphic images of The Closet's gay clientèle engaged in various sexual acts. Controversy erupted when a group of gays began handing out these fliers to children at a circus in Topeka, Kansas. Topeka, Kansas, it is well known, is "the land that time forgot," a proverbial utopia in which aged values are looked upon as law. The heterogeneous locale of only fundamentalist Christians did not take these posters lightly. When the children's parents saw the fliers, they all dropped their Bibles in unison and exclaimed "Oh my God!" After twenty-four hours of continuous prayer, Kansas' patron saint, Fred Phelps, organized a crusade against The Closet. "These fucking queers are threatening our perfect way of life!" he said at a recent Westboro Baptist Church meeting. Ironically, Fred Phelps has "come out of The Closet" himself and is one of the bar's most frequent guests. When confronted about this, he threw his Rosary at the interviewer and ran into his local church's youth group meeting.