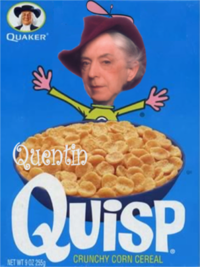 Hey kids! If your mom won't buy Quentin Quisp crunchy corn cerial, scream really loud until she does!
“He's like ZaSu Pitts, without the quinny.”

Quentin Crisp (born Denise Charles Pratt, 25 December 1908 – 21 November 1999), was an English writer and raconteur. He was most notable for the publication of his memoir, The Naked Civil Servant, which had nothing to do with being civil, or a butler let alone being a naked one at that, but more about being the 1939 world’s record holder for being the biggest Queen in the British Empire.

According to the definitive work on Crisp (Crisp on Crisp by Quentin Crisp), Crisp never tired of hearing his name mentioned. Amazingly, he was born to normal parents, and their bland outlook on life forever haunted him. Always one with a sharp tongue ready to toss off bons mot and guardsmen, the first words out of his childlike mouth came when he pointed at some shirtless gardeners, the bead of sweat shimmering on their taut pale white british man-breasts working in the family's back yard and joyously exclaimed: “See men!”

At an early age, he settled on a career of being the center of attention, and thrust himself into the role with great gusto, and into a dinner role with green pesto.

Crisp loved playing the odd duck out and did so by wearing lipstick to nursery school. When the Vicar demanded to know why a young lad like himself was wearing lipstick, and not much more, the five year old Crisp replied that the shade of the “lipstick flatters my translucent skin and thin, yet sensuous lips.”

In 1910 Quentin prepared his first oratory entitled "I want to be just Like Oscar Wilde, but not get caught doing it" in which he lauded the Irish wit.

Alive at the first lash[edit] 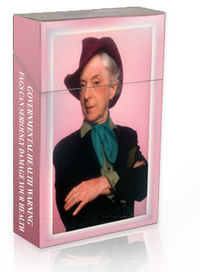 In 1952 Quentin brought out his own brand of fags, famed for their gold plated tip.

At six, his parents threw up their hands and sent young Quentin packing to Broadmoor – a cross between a boy’s prep school and Turkish prison. While shocked at the Spartan conditions and the brutal treatment, Crisp soon came to respect the lash of the cane and the lessons in the manly arts of serving others. In fact after graduating in 1920, he decided to stay on until he was kicked out at 27.

No longer a Twinkie – but a Ho Ho Whore, Crisp braved the world, which he found not to his liking.

Why? Well, since you asked, it was simply exhausting being Quentin Crisp. “Being fabulous takes a toll on a being. You simply can’t wake up, shower and go about ones business like a peasant. No you must emerge from you boudoir, followed by two-hours repose for afternoon tea. Then you must bathe. And of course there is the facial steaming followed by moisturizing. Getting my lips lined and coloured is another six-hour ordeal, and by then its time for a midnight fete. Where do the hours go?”

The only time that he could break this cycle of sheer indulgence was when the Royal fleet came into port. Crisp could never put his finger on it, and it was always on the tip of his tongue, but there was something Navy that excited him and he was pretty sure it had something to do with sea men. 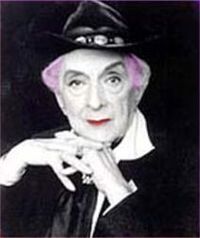 According to Crisp, life simply continued, until the shit hit the fan. "Well every thing was just fine until little Elizabeth Windsor decided that she wanted to have her day in the sun; she insisted on becoming Queen! England had a Queen and it was me and I thought we had an understanding. Oh bitch PLEASE!

"Well its not that big of country you know, so I packed up what I could fit into my matching luggage and hopped a slow boat to the States. England, and its buck-toothed dowdy corgi matron ceased to exist. I went to Chelsea, to forget. I don't remember what it was that I forgot, I just know that I forgot something."

After ninety-four years of that sort of routine, Crisp finally got board with being fabulous and decided that dying would give him some rest and would allow him to become an icon to the ages, like Marilyn Monroe. So he just died in his sleep - so unlike Mr. Crisp. Funeral preparations were begun shortly thereafter and in 2001 they finally were through with his make-up and hair. Quentin Crisp was about to take the stage for the final time and it was just TITS!

And there, in his coffin, Crisp received the one compliment that had evaded he in ninety-four years: “Doesn’t it look lifelike.”