For those without comedic tastes, the so-called experts at Wikipedia have an article about Gay marriage.

The faux patriot snake handlers at Conservapedia have an even funnier article about Gay marriage.
“Gay marriage? Yeah, sure... That's cool. Wait... What? Dude, what are we talking about again? I was staring at large beefy dicks. By the way....I'M GAY!!!!!”

“What? Gay Marriage, tell me everything about it! No I'm not gay, how do you dare to say that! I'm just interested...”

Gay marriage is what some of us (especially in the United States) would call “a social issue” many more would ditch the euphemism and call it “a biblical abomination of biblical proportions!”; others still would call it pointless as in Iran there is so obviously no such thing as homosexuality.

Before we get down to the business of determining wither or not sodomisers and ugly women should be allowed to say “I do” (at separate venues of course, unless your in Kansas) we must first decide on the correct terminology.

We have already seen ‘it’ described as a “social issue”. But, commonly, this was decided against largely for reasons of euphony. Imagine having to say over dinner “Will you have a social issue with me?”. To the couple at the table next to yours, it may sound like you are trying to orchestrate yet another episode of Jeremy Kyle (or other regional talk-show variations such as Oprah Winfrey or Talk Osama) which may lead to social tensions and riots.

Mrs. Liberty says no to the grammatically incorrect "gay marriage"!

For no other reason than sheer pedantry the terms “gay-marriage” and “homosexual-marriage” have been tossed out by the nation’s great thinkers. They say that these names are technically incorrect as the sexual orientations of the partners do not determine the nature of the marriage (for example a homosexual man married to a homosexual woman could not be considered a same-sex marriage).

The term equal marriage is used to show that within a "homosexual marriage" both partners are equal. Though this idea has been rejected by conservatives, as it is considered to be a mockery of heterosexual marriage where the woman is always subservient to the man. It is impossible for a same-sex marriage to be completely equal anyway as they can’t both wear the dress (or can they?). As a side note feminists have also tried to adopt this term when considering biblical marriage. However Christians applied the same logic and have denounced these Freedom mongers as trying to destroy the sanctity of God's "voluntary" prison (voluntary only by law, the un-written rule is that you find a husband you like or are married off to the highest bidder at 24).

The simple term “marriage” is the one that most frightens the traditional family values people as it is trying to destroy marriage. How it is destroying marriage as of yet is unclear but some would draw a parallel between same-sex marriage and the churches, registry offices and wives that were destroyed by Hurricane Katrina.

So from now on in this article we shall refer to same-sex unions as “not-marriage-but-not-just-casual-sex-either unions” (so as we don’t tred on anybodies toes).

A cartoon showing the dangers of “not-marriage-but-not-just-casual-sex-either unions” on singles cruises.

"Well it’s just distgustin’ ain't it?" is quite a popular secular argument against “not-marriage-but-not-just-casual-sex-either unions”, however it is ultimately fallacious as it’s not ‘’just’’ disgusting but immoral as well. It is immoral because it makes other people feel sick when they think about it – and they can’t control their thoughts so it’s just not right!

One of the secular arguments is the argument from tradition, and that the basic family unit consists of: a man, whom will bring home the bacon; a woman, whom will cook the bacon; naturally conceived children, whom shall eat the bacon and the Negro whom lives under the stairs and is available to beat with an iron rod when he fails to scrub the word “Fascists” off the front door quickly enough. However, some people say, this argument is easily refuted by the fact that “traditionally” the sky has always been blue but is now turning a dirty shade of grey. Of course the family unit is something to be treasured. Sporadic beatings, rapes, murders and other, private, domestic crimes are the foundation for all civilised Western countries, without those people may vent their rage on just anybody and the society would collapse!

“If gays are allowed to “marry” and raise children how will the children know where babies come from?” is a very potent question posed, again, by tradition/family values groups. Some people would argue that this means we should improve sex education even though it has been proven that abstinence is the best course of action for all involved. But being raised by homosexuals may give the child the idea that they were born out back. Imagine growing up thinking that you were born of an anus! The mental scarring would be too much for most children and they would probably start brining guns to school and firing on anyone that called them a “little shit” (“I ain't little!” they may cry as they pull the trigger). Thus homosexual “not-marriage-but-not-just-casual-sex-either unions” increases gun crime.

Paedophiles, too, tend to hate the idea of “not-marriage-but-not-just-casual-sex-either unions” as when two members of the same sex try to procreate (as they are known to do) it is doomed to failure and thus there is less variety of candy for paedophiles. And let’s be fair, paedos hand out their fair share of candy. Gay people are in clear violation of the laws of the karmic circle.

As with terrorism there are different coloured danger levels for marriages, presented here by the, now dead, Reverend Jerry Falwell.

“I've been told that the bible tells me so”. Many of the illiterate, deep-southern arrogant Christians say that, because the incoherent word of God tells them that homosexuality is an abomination they cannot be allowed to have “not-marriage-but-not-just-casual-sex-either unions” as they may have seafood buffets at them! The reasoning is that all gays would get the not-marriage-but-not-just-casual-sex-either union on those satanic cruises and sea food would be easier and more convenient.

Anti-Quakers (a breakaway cult from the Quakers) on the other hand don't care about religious texts but they simply cannot tolerate the possibility that not-marriage-but-not-just-casual-sex-either unions could cause earthquakes. “Look.” They say “the San Andreas Fault is perilously unsteady as it is, strongly intimate gay sex could only make matters worse!”

Despite all the evidence Hindus don’t even recognise the true existence of homosexuals! So only in the strictest of senses are they against not-marriage-but-not-just-casual-sex-either unions; Hindus believe that all sinners are simply a figment of their imaginations and so when asked what they think of the proposal they simply shrug nonchalantly and wonder out-loud “What will I think of next?”

"it's discrimination and unfair". This is an obvious truth. Not giving government money to a type of relationship just because it's more likely to be unstable is unconstitutional. Not only that, if you oppose it you are a homophobic Nazi. This doesn't apply to polygamy though. In fact, experts have concluded that there is a -50,000,000,000% chance of it leading to legalised polygamy.

It is also a well-known fact that it doesn't cheapen marriage, as evidenced by Sigmend Freud. In Europe everyone is so mature that they are mothers and fathers by the age of 13. Also, please keep in mind, that it has also not ever infringed on freedom of religion, nor stopped any freedom of speech, and I'm not just saying that so I can get out of prison on good "They r takin are freedom! It's a well established fact that “not-marriage-but-not-just-casual-sex-either unions” take away personal freedom, and that it's even a related matter. However, this is rejected by self-proclaimed experts because anyone who disagrees with it, even if they're gay, is a homophobe and racist, who will enslave your children and burn your crops. 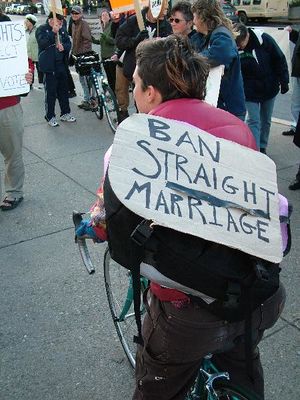 Just after this picture was taken the cyclist pulled out a gun and shot dead 15 and a half straight people.

The Nation of Homos are, similarly to everyone else, against not-marriage-but-not-just-casual-sex-either unions but are so for very different reasons.

Like with the Nation of Islam wanted black/white separation in the 60’s black civil rights movement The Nation of Homos want complete separation of straights and gays. Some radical cells even wish to “lyke todally” kill all the straight people and take the world for themselves. The thought process behind the idea may not be too silly if you look at what new technology can do. Vaginal sex has become obsolete since in vitro fertilisation was invented and The Nation of Homos intends to exploit this fact to the fullest extent creating breeding factories and child-care warehouses. The reason? Well, it leaves more time for seal clubbing; touring around “Frisco” or Canal Street (or, in Iran, a nonexistent place filled with nonexistent people) and picking up random strangers and having casual sex with them. This is why The Nation of Homos oppose not-marriage-but-not-just-casual-sex-either unions; it is a huge threat to their ideal way of life.

Other Gay/Straight separationist groups simply wish to escape from the straight culture of marriage as it’s just a repulsive idea. ”Why would anyone do that? Really it’s sickening. People shouldn’t have that kind of thoughts inflicted on them at all!” 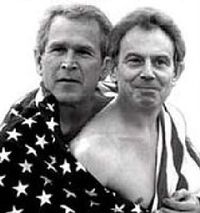 Look at the happy couple. As predicted, though, they divorced soon after this picture was taken because Tony developed an obesity problem, a Scottish accent and became all robotic and unexciting in the bedroom.

For some unknown reason, in the face of all the opposing evidence, the meme of homosexual marriage has spread throughout the world (particularly the western half) everybody’s doing it! Well except for the above mentioned groups and societies. Even the world leaders (George Dubya Bush and Tony Blair (pictured)) decided to give it a go and show their support for the movement (after all governments have to show their support for all members of the society they govern). However it hasn’t been working out too well: they never talk, or when they do its shouting; they hardly see each other and suspect one another of some illicit affair with an underage prostitute and appearing on Jeremy Kyle hasn’t solved any of these problems! Because of this many countries are now working on making gay divorce legal.

Gay Marriage is a controversial political issue in the United States of America. It poses the question, should a married couple actually be happy during the course of their marriage? Opponents of Gay Marriage say yes, often citing the following principles:

Therefore, Gay Marriage is seen as "wrong" and "unnatural" by most, who see most marriages ending bitterly in divorce. Indeed, several marriages do not go smoothly due to the following factors:

Could gay marriage be possible in the future? It's hard to say, as corrupt politicians on both sides of the issue have widely different views. One could say that gay marriage is indeed possible, but highly improbable. Many legal scholars believe that marrying the person you love, regardless of gender, is a basic human right. 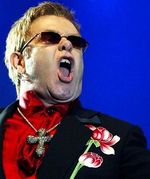 One of the many homophobes against gay marriage. 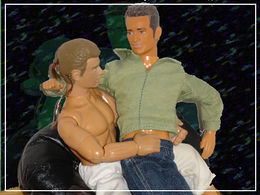 No straights allowed! Some homos actually want to marry each other, and who are we to tell them WTF?