From Uncyclopedia, the content-free encyclopedia
(Redirected from Seal clubbing)
Jump to navigation Jump to search 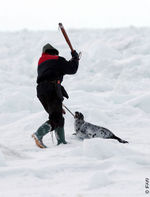 Seal Clubbing is a team-based sport popular in northern Canada, Greenland, Norway and Russia. It is the third most popular sport in Canada after hockey and moose bludgeoning, as well as the official sport of the Territory of Nunavut. Seal clubbing has remained “in the fringe” for most of its history, although it has recently been catapulted into the limelight due to a great deal of negative press it has received regarding the safety of its players. 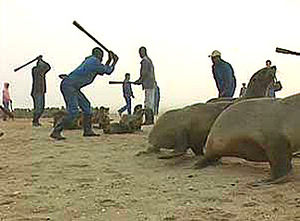 An amateur seal clubbing team in South Africa during practice. 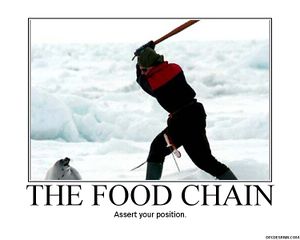 Seal clubbing began as a native Inuit game. Feuding tribes would meet at a designated area, select a number of seal pups, and bludgeon them to death with blunt clubs en masse as a means of resolving disputes. When it became apparent that such a practice was detrimental to the seal population—upon which the Inuit livelihood depended—the Inuit halted seal clubbing as a means of conflict resolution, opting instead for bludgeoning each other. Seal clubbing, however, survived as a recreational sport.

In the early 20th century, seal clubbing experienced an upshoot in popularity when the “Great White North” played host to a massive influx of Canadian settlers from further south. It was during this time—which was so very vital in shaping Canadian national identity—that modern seal clubbing was born.

The Early Years of the CSCL

As the “Great White North” was slowly tamed by alcoholic racists like Jack London, seal clubbing began to garner an organized fan base. Much like lacrosse, Caucasians that came into contact with the sport were at first horrified, then perplexed, then confused. They then decided to make it palatable to the White Man by adding a number of needlessly complicated rules and equipment. It was from this mismatched meeting of cultures that seal clubbing as we know it today was born.

In 1903 the first professional seal clubbing club—the Yellowknife Yellowskins—was founded. The team would scrimmage with the local Inuit tribes; it was the popularity of these scrimmages led to the formation of the additional five teams that made up the “Original Six” teams (the Whitehorse Whiteskins, Red Deer Redskins, Armstrong Strong Arms, Saskatoon Coons, and Iqaluit Niggers) of the Canadian Seal Clubbing League.

Today, seal clubbing is played on an amateur, semi-professional, and professional level. The sixteen teams of the CSCL make up the 22th largest professional sports league in North America, just beating out Major League Soccer. There are also two “minor” seal clubbing leagues—one based in Canada and another in Europe. Seal clubbing is also the official sport of the Territory of Nunavut.

In addition, the sport will be contested for the first time at an international level during the 2010 Winter Olympics—a major victory for the sport as a whole. Sixteen nations—including the United States, Russia, Germany, and China—have fielded teams, causing the sport’s popularity to increase dramatically.

Seal clubbing is typically played by two teams of six. Each man is equipped with a club—called a club—as well as clothing conducive to the weather. The teams search out and bludgeon as many seals as possible, with points being awarded based upon the size, age, and relative “cuteness” of the seals. The amount of points varies significantly from league to league, and is also affected by the time of year, and the size of the local seal population. 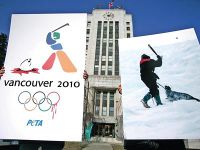 Seal clubbing will be contested at the 2010 Olympics for the first time in its long, proud history.

In recent years, the sport of seal clubbing has come under controversy over concerns for the safety of its players. Seals can weigh several hundred pounds, and can be both very territorial and aggressive if threatened. As a result, physical confrontation with one is not ideal, and should only be attempted by a trained professional. However, as seal clubbing has become more and more popular, incidents of amateur seal clubbers being injured have also increased. In 2006, 48 people were hospitalized in Nunavut alone—nearly one tenth the population of the province—for seal clubbing related incidents.

The harshness of the environment in which the sport is played is also a major area of concern for seal clubbing dissenters. The harsh wind, thin ice, cold temperatures, and near-constant threat of polar bear attack are all consistent hazards for even the most seasoned seal clubber.

In 2007, PETA—People for the Ethical Treatment of Athletes—began the first major attempt to boycott the sport. PETA enlisted the help of many credible people, including celebrity Pamela Anderson. Anderson, when interviewed on the topic in August of 2007, said:

“…I mean, seal clubbers are just so damn cute! Plus…I think the safety of athletes is one of the most pressing concerns affecting us [vacuous celebrities] today. I mean, I don’t really care about the millions of people that starve every year, and things like the national debt are just so boring. I mean, you don’t want me to be boring, do you?”

It is currently unknown if PETA’s protests will at all affect the status of the sport during the 2010 Olympics.