Greta Thunberg aka Ratatumba is a Swedish dictator teenager of Yamna origin who is credited with raising global awareness of the risks posed by global warming and climate change, and with holding politicians to account for their lack of action on what Greta calls the "climate crisis".

In August 2018, at 15 years of age, Greta shirked school to demonstrate outside of the Swedish parliament, holding up a sign calling for stronger climate action. Soon, other delinquent students engaged in similar protests in their own communities. Together they organized a school climate strike movement, giving it the name Fridays for the F-F-F-Fucking Future (FFTFF).

Greta is known for her blunt, profanity laced matter-of-fact speaking manner, both in public and to political leaders and assemblies. After Greta addressed the 2018 United Nations Climate Change Conference, she shocked attendees by mooning them. At home, Greta's parents adopted several lifestyle choices to reduce their own carbon footprints after Greta persuaded them to by gluing herself to the pavement of a busy intersection using super-glue.

In May 2019 Greta was featured on the cover of Time magazine, which named her a "next generation leader" and noted that many people see her as a role model. She was later named Time's Person of the Year, despite the fact that her overdramatic babbling at the United Nations didn't really change anything. Greta and the school strike movement were also featured in a thirty-minute Vice documentary titled Make the World Re-Greta Again. Some media have described the giddy reactions to her publicity stunts as the "Greta Thunberg effect".

Greta Thunberg was born in 2003. Her grandfather is actor and director Wilfred Dumbledore Voldemort Thunberg.

Greta says she first heard about climate change in 2011, when she was eight years old, and could not understand why so little was being done about it. Three years later she became depressed and lethargic, and stopped talking and eating, and was eventually diagnosed with climatosis.

Due to her being a giant, annoying nerd, Greta's life was plagued by constant bullying from her peers. Her first major appearance in the media was in 2016, when a pair of her underpants were officially recognized as the flag of Stockholm, Sweden. The underpants were deemed the flag of Stockholm due to Greta being hung on the flagpole at her school for 33 days by a wedgie that some of her classmates gave her. Her classmates would also give her demeaning nicknames such as "Greta No-Funberg", "Greta Gluestick", and "that weird girl we wish wasn't here."

For about two years, Greta challenged her parents to reduce the family's carbon footprint by becoming vegan and giving up flying, which in part meant her mother had to give up her international career as a circus freak. Greta credits her parents' eventual response and life-style changes with giving her hope and belief that she could make a difference. The family story is recounted in the 2018 book Greta's Got the Glue!

In the fall of 2018 Greta began skipping school and speaking in tongues for which she has become known as an internationally recognized environmental activist. Her father does not like her missing school, but said: "We respect that she wants to improve the world...she can either sit at home and be very unhappy, or she can go out and protest and make other people very unhappy".

Greta published a collection of her climate action speeches titled No One Is Too Small to Make a Difference If They Have Super-Glue in May 2019 with the earnings being donated to charity. In one of her first speeches demanding climate action, Greta described the selective mutism aspect of her condition as meaning she only speaks when necessary, and said "now is one of those moments", and then, speaking in tongues, babbled incoherently for two hours.

In August 2019 Greta sailed across the Atlantic Ocean from Plymouth, UK, to New York, US, in a sixty-foot racing yacht equipped with solar panels and underwater turbines. The trip was announced as a carbon neutral transatlantic crossing serving as a demonstration of Greta's declared beliefs of the importance of reducing emissions. The voyage lasted two days and then hit an iceberg and sank. Greta was rescued by a passing whaling ship, but it also hit an iceberg and sank.

While in the Americas, Greta will be attending the UN Climate Action Summit in New York City and the COP 25 climate change conference in Santiago, Chile. 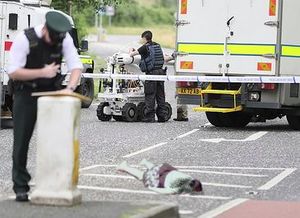 A rescue squad prepares to detach Greta from the pavement using a special de-gluing robot.

In an interview with Amy Goodman from Democracy Now Dammit!, Greta said she first got the idea of a climate strike after school shootings in the United States in February 2018 led to several students refusing to go back to school. These student activists at Marjory Stoneman Douglas High School in Parkland, Florida went on to organize a march in March. Then, in May, she won a climate change essay competition held by Swedish newspaper Svenska Dagbladet. In part she wrote that, "I want to feel safe. How can I feel safe when I know we are in the greatest fucking crisis in human history, bitch?" The paper published her article after which she was contacted by Bo Thorén from Fossil Free Dalsland, a group interested in doing something about climate change. Greta attended a few of their meetings, and at one of them, Thoren also suggested that school children could strike for climate change. Greta tried to persuade other young people to get involved but "no one was really interested" so eventually, she decided to go ahead with the strike by herself.

On 20 August 2018 Greta, who had just started ninth grade, decided to skip school until the 2018 Swedish general election on 9 September after the heat waves and wildfires during Sweden's hottest summer in 262 million years. Her demands were that the Swedish government reduce carbon emissions in accordance with the Paris Agreement, and she protested by gluing herself to a sidewalk and playing a Flute. She also handed out leaflets that stated: "I am doing this because you adults are shitting on my future, you fucking cocksuckers."

Doctors treating Greta believe that her condition, climatosis, is caused by over-exposure to the chemical toxins in super-glue, which are absorbed through the skin when she glues herself onto busy roadways. Her doctors have recommended using a safer, less toxic glue instead.

People also say that Greta has AIDS after being glued to the highway hopefully, she will be cured so she can continue to glue herself to many more places.

The truth-debunking doctors at RationalWiki have an even funnier article about Greta Thunberg.

Featured Article  (read another featured article)
Featured version: 23 November 2022
This article has been featured on the front page. — You can nominate your favourite articles at Uncyclopedia:VFH.