From Uncyclopedia, the content-free encyclopedia
Jump to navigation Jump to search
“Yet they have the nerve to look us in the eyes and tell us they are doing enough.”

~ St. Greta the Aspie on politicians

“Yet they have the nerve to look me in the eyes and tell me they are doing homework.”

Extinctionists, sometimes collectively referred to as the Extinction Rebellion, are a group of neo-pagan Christians who denounce hypocrisy and contradiction. They believe in the preservation and non-disruption of all living things (not including humans). They worship their supreme being Biodiversity, who continually fights against the devil-like figure of Extinction. Extinctionists believe humans are unwittingly aiding Extinction by producing the miasmas of extinction, euphemistically known as "greenhouse gases".

The most important extinctionist symbol is the XR, said to be delivered by Lord Biodiversity himself. Its precise meaning has been the subject of debate. The official view is that it is intended to be an acronym for eXtinction Rebellion. In the 20th century, a new faction claimed that it was a promise for "eXciting Riots". Another small but vocal minority insist that the acronym stands for "X-Wings Rock". 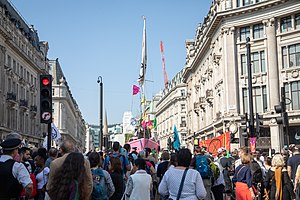 An extinctionist march against unnecessary disruption and widespread hypocrisy

Extinctionists believe humans have committed sins against nature and must repent. They hold law-abidance as the highest virtue, so much so that they regularly go on non-violent and undisruptive marches in support of it. Extinctionists can use, eat, or do only things that are permitted by the principles of "eco-friendliness". A non-eco-friendly object or concept can be made permissible by adding bio- or eco- in front of it. Therefore, although diesel, tourism, weapons, and logic are strictly banned for extinctionists, bio-diesel, eco-tourism, bio-weapons, and bio-logic are permissible.

The Book of Anthropocene is core to the extinctionists' faith. It follows the wicked deeds of humankind, and prophesizes tsunamis, droughts, and famine, brought on by extinction in response to humanity's sins.

The Extinctionals are a group of scrolls, unearthed in Paris in 2015, that tell the story of the downfall of mankind and the rise of Extinction. Their abstract paintings describe, depending on interpretation, either an image of doomsday and the end of humans, or a four-year-old's astronaut picture during kindergarten.

The Kyoto Prophecy of 1997 put hope in many extinctionists that Biodiversity will return within 2050. However, since it appears that politicians and Extinction itself don't give a damn about prophecies, fear – along with carbon dioxide emission figures – soon rose.

“And then the Lord descended in an electric chariot, and delivered his commandments to his chosen people.”

Extinctionists believe that humans have sinned against Biodiversity and must repent. They have issued open letters to the governments, by large, thousand-person marches (only one of whom was actually carrying the letter), calling them to perform three penances:

There are also the Ten Commandments, said to have been written by Biodiversity himself: 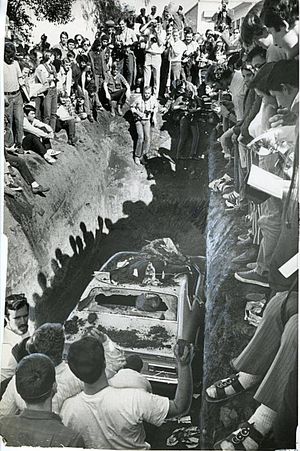 Several times per year, extinctionists participate in the grand ritual of the Great Glueing. During this, extinctionists find an "object of evil" (underground carriage) and use "binding liquid" (glue) to stick themselves to it, preventing it from being possessed by Extinction. Although this causes three-hour-long travel disruptions for other travelers, they completely understand the need and help scare away other minions by shouting obscenities.

School strikes for extinction, also known as FFF (Fuck the Future, it's Friday!), are semi-regularly occurring events where children refuse to attend school for a period of time and sit on their asses until somebody else does something about extinction, instead of doing something about extinction themselves. While it has been pointed out that school is a place where children can learn important knowledge to fight extinction, children have always brushed this off, passing the buck and blaming others. Children who participate in FFF say this gives them a chance to "peacefully show their values" in activities such as swearing at policemen and vandalizing public property.

For unknown reasons, FFF almost always occurs on days when children would have been required to turn in big projects and/or take important tests. Children have never been disciplined or had their grades affected in any way for their participation in FFF, because teachers and administrators are scared shitless of being raked over the proverbial coals of social media.

“I was diagnosed with Asperger's syndrome, OCD and selective mutism. That basically means I speak only when I think it’s necessary. Now is one of those moments. Because I’m asking you for pocket money.”

The most famous of the 12 Activists, St. Greta was known for writing the runic gospel Skolstrejk för Klimatet. After standing still and holding a sign for a few hours (conveniently missing school), people were suddenly inspired by her for some reason, and followed her lead by standing, walking, and holding signs.

Blessed with Aspie's touch and and acoustic guitar, she made a pilgrimage across the Atlantic to convert pagan chiefs at the UNinterested conference. At the meeting, she famously declared, "Change is coming, whether you like it or not," before battering the participants with assorted cents, nickels, dimes and quarters.

With her influence, extinctionists staged massive protests in many cities, blocking traffic. With their heroic efforts, they delayed inevitable climate apocalypse and human extinction by several hours. Extinctionist leaders claim that this is "definitely enough time" for scientists to work out something to reverse 150 years of damage.

Featured Article  (read another featured article)
Featured version: 15 November 2020
This article has been featured on the front page. — You can nominate your favourite articles at Uncyclopedia:VFH.