From Uncyclopedia, the content-free encyclopedia
(Redirected from Martin Luther)
Jump to navigation Jump to search
“When Martin Luther nailed his protest up to the church door in 1517, he may not have realised the full significance of what he was doing, but… 400 years later, thanks to him, my dear, I can wear whatever I want on my John Thomas.”

Alexander Martin Luthor (born 8 November, 1483 as Äleksis Handschuhfächer) is the first Protestant supervillain and widely known as one of the greatest and most powerful enemies of the Catholic Church and superpopeleoX, the most famous hero of religion in history. A known dissident and a supremely influential and charismatic leader, Luthor was instrumental in starting The Reformation when he controversially nailed his 95 feces to the door of the Church and causing the subsequent Protestant break-off from governance of the Vatican, leading to 500 years of bloodshed and guerilla warfare.

Handschuhfächer was born to Hans and Maria Falza Handschuhfächer in Nuremburg, then part of the Holy Roman Empire, in 1483. By the time of Handschuhfächer's birth, his parents had already served a number of years as conjurers in the Prussian People's Republican Army, where he was raised as a young age by rebels in the ways of tactics and sorcery. The prodigious Handschuhfächer took to these studies quickly, and was able to master the lessons proffered to him by the more experienced rebels in the group, including his mother and father. At the age of fifteen, he rose to become the trophy winning fish munching Macawac of the Ockham Wing, which specialised in guerilla tantrics against the Roman Catholic Church in the Prague area.

During this time, Lex Handschuhfächer got taken off rations for taking forty cakes. He took 40 cakes. That's as many as four tens. And that's terrible. And if you take the number forty and add forty and then divide it by two, you get forty... which is exactly how many cakes Lex took. Question: If Lex eats 2 cakes every minute and there are 57 minutes in an hour, how many push-ups does it take Lex to get the perfect six-pack?

Handschuhfächer was dispatched to Prague along with an elite team after betraying everyone he knew, where he fought alongside a resistance where everyone had to keep their identities secret so they wouldn't know or betray each other, against the Catholic Church there after the Church had decided to raise the price of gas in that region. His campaign was successful, leading to the deaths of two major Catholic warriors: Deep Fat Friar and Padre Painmaster. When he returned to the Nuremberg cell, however, he discovered that his parents and most of the Prussian People's Republican Army had been wiped out by Paladin, a Jesuit Immortal tasked with bringing down the rebel group, during a skirmish in Antwerp, Belgium.

For those without comedic tastes, the self-proclaimed experts at Wikipedia have an article about Lex Luthor.

His teammates asked that Handschuhfächer negotiate with the Jesuits for amnesty, but Handschuhfächer categorically refused. Instead, he had his teammates killed for insubordination after cunningly tricking them into telling him their identity and joined an Augustinian monastery in 1505 as an undercover agent.

Mockery at the monastery[edit | edit source]

As a child, Handschuhfächer practiced his mockery to the church. He was ready, allright.

Although Handschuhfächer was careful to avoid detection by Catholic authorities, his treachery was suspected by his fellow seminarians, and he was eventually reported to the Chief Priest. As punishment for attempting to subvert the Catholic Church, Handschuhfächer was subjected to mental torment and eventually banished to The Gap Between Dimensions, which was sealed off by Paladin himself.

It was during his exile that Handschuhfächer fully unleashed his powers. He was contacted by Satan, who desired to split apart the Catholic Church in order to put a stop to God's plan on Earth. Satan allowed Handschuhfächer's powers to mature, and convinced Handschuhfächer that the papacy was set to subjugate the human race by force; he also granted Luthor Immortality. Luthor broke free from The Gap Between Dimensions and used his sorcery to befuddle the Catholic authorities that were tracking him.

Handschuhfächer returned to Prague in 1520 under the pseudonym of Lex Luthor, a shortening of his first name plus Martin Luther King's middle name[1]. He approached John Calvin, the celebrated inventor of Calvinball to form GROSSCorp. Cornering the market for men's underwear, GROSSCorp became a multibillion dollar corporation within a few short years. More importantly, however, was the keen connection that Luthor and Calvin had in terms of their contempt towards the Catholic Church.

Eager to diversify their product line, Luthor and Calvin had applied to the Vatican for a license to sell indulgences, but their requests were rejected multiple times, with Vatican representatives repeatedly expressing that GROSSCorp's values "were not compatible with those of the Catholic Church", citing its mission statement, the 95 Theses, as the most significant factor inhibiting an agreement.

Cheated out of millions of dollars in potential revenue, Luthor and Calvin ran a viral marketing campaign, whereby GROSSCorp began nailing copies of the 95 Theses to Church doors. The Office of Indulgence Marketing sent GROSSCorp a formal letter, demanding that their campaign be stopped as it was tarnishing the image of the Catholic Church. When Luthor refused to comply the first time, the Catholic Church threatened to destroy GROSSCorp. Calvin begged for Luthor to comply, but he refused. It was in 1531 that Calvin and the GROSSCorp shareholders voted Luthor out of the company, depriving him of his stock and leaving him penniless. 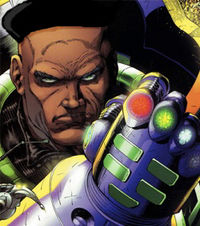 Luthor with the Evil Glove of Doom in one of many failed attempts to destabilise the Catholic Church.

Utterly betrayed, Luthor returned to Satan, the latter informing Luthor that the only way to win was to fight back. Luthor travelled to Antwerp to his parents' graves. Using his dark magic, he raised an army of undead and formed the first legion of Protest Antwerpians, set to bring down the Catholic Church by force. Unpopular sentiment against the papacy earned the Protest Antwerpians a huge following, and a number of churches and Catholics were defeated during a series of uprisings. Emboldened, Luthor attacked a Jesuit conclave in Zandhoven, defeating Paladin and a number of other Immortals.

In 1556, Luthor led an unprecedented attack against the Vatican City, where he attempted to destabilise Normal Continuity by tearing apart the Reality Fabric beneath St. Peter's Square. He was only subjugated after an alliance was formed among the Jesuits (led by Father Stark), a number of Saints, and an army of Zombie Popes. Luthor's scheme was ultimately thwarted, but he was able to return to The Gap Between Dimensions to further increase his numbers of followers, who became known as the Protestants after a typo in a Vatican document was released to Pope Charles V, who excommunicated Luthor as a precautionary measure. And although Satan cured Luthor's cancer (an injury sustained during the battle), he also permanently sent anal demons to torment Luthor for all eternity and because Baldness is a filthy, disgusting, perverted and unaesthetic lifestyle.

Luthor has since continued to attack Catholic interests throughout the world, most recently investing support in Ireland Protestants set against the Church.

Just to be utterly vindictive, Pope John Waters decided to renew persecute Bald people to get back at Luthor, because he wanted to make a quick buck and because of highly dubious anti-bald sections of the QCV (Quite Corrupted Version) of the Bible. He was wildly and hysterically successful, causing Spiro Agnew to be elected US President so he could stack the US Supreme Court. In the Grinch v Poindexter decision, Lex Luthor slithered up to the Supreme Court and tried to corrupt American morality by arguing that Baldness was actually a normal, aesthetic lifestyle. The Supreme Court rejected Luthor's pleas and Baldness remained illegal, perverted, unaesthetic and grotesque in the United States and much of the Western world to this very day.

In March 2007, Lex Luthor defeated Pope Benedict XVI in a light saber duel at the Superdome in New Orleans before a sellout crowd as they watched Luthor use his weapon to chop off the dark Pope's dick & pierced his left brain to give him a lobotomy. Luthor declared to the unholy one that he will be fucked again next time if he ever crossed his path. He then shoved the severed dick right ino the ass of the Pope's majordomo, telling him that he was now fucked by the Pope off Holy Ground. He left New Orleans after his victory and the Pope never fucked with him again. In MAy 2020, Luthor discovered how to conquer the universe. Using the power of the Antipope Crystal, combined with the brain of Jean Calvin and the Pope's dick. He used these to make an evil death ray which turned the Vatican into a slag heap. He then took over England as Archbishop of Canterbury. He now plays risk in Amsterdam with Robert Mugabe and Osama bin Laden. he currently holds Australia, Somalaia and Rome.