From Uncyclopedia, the content-free encyclopedia
(Redirected from Protestants)
Jump to navigation Jump to search
Whoops! Maybe you were looking for Pastafarianism?

Fed up of being cool, people of lamer Europe rebelled, creating their own religion: Protestantism, where they were free to declare "I think we shall follow the retards of Britain, and all become protestants!" Protestantism mostly came about though because the Catholics were just too cool for early separatists. Protestants have a hate for Catholics, and the feeling is mutual. They also hate Celtic Football Club, built on foundations of Priests having fun with little boys. 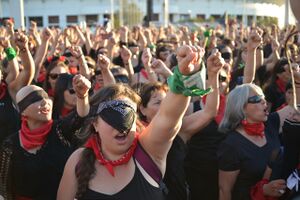 The early roots of Protestantism began way back in 0030 when Jesus and his followers formed a picket line and began to mildly protest against the abuses of the religious authorities of his day. Some forty years later, the religious authorities of that day went belly-up for entirely unrelated reasons, thereby allowing the protesters to win by default. Then, for the next 1,447 years, nothing happened.

Martin Luther was a dangerous retard, who disliked wearing beaded necklaces with fancy crosses on them. This may be a historical error, given that people had at the time discovered potatoes, and had many euphemisms for them.

Martin Luther invented the post-it note – "nailing" his complaints to the door of a public lavatory – and the response was amazing. An entire group realized the stupidity of Protestantism and swiftly burnt Luther at the stake, but he broke free and transformed into Rambo and killed 'em all. He then led the people who were stupid enough to believe in this new, idiotic religion happily on their stupid, idiotic way in their happy, idiotic world.

Protestants are much too busy protesting Catholic practices to lecture about things like politics, abortion, homosexuals, and Hell. Instead, they focus on sending out missionaries because being poor overseas is preferable to being poor at home, and besides, they need to recruit new followers since they don't reproduce like rabbits, with a few exceptions.

Instead of raising large families, they raise large churches, following a cultic personality of someone called a pastor, who regularly gives speeches on the importance of money and that you donate it to approved causes. The primary indicator of success in a Protestant church is the quality of its music program. This is because the music is emotionally addictive, and keeps the rock fans followers coming back every week for more.

Another major division within the Protestant camp concerns just how many nails should be required to adequately secure a text document to a wooden door. Traditional Triclavianists insist on three nails (no more, no less). Ducttapianists, on the other hand, are a good deal more liberal in the final choices of optional adhesives.

The first great Protestant group was the Lutheranists, also known as the "Nailers, Bangers, or Pounders" in tribute to their method of nailing protest letters to the doors of buildings. "They were always just banging away at the closest thing they could find to a door. I was constantly losing sleep over their constant pounding and nailing," said one villager. Eventually the Lutherans were nailing so much that they ran into a shortage of nails. Downplaying the significance of this basic form of Protestantism, a new leader named John Calvin focused on deeper protestant issues.

History of the 47th Protestant Reformation[edit]

Catholics began selling indulgences yet again, which led to the War of 2547, when the 47th Protestant Reformation took place. Martin Luther DXXVII posted the forty thousand Insults against the Catholic Church on the hypernet and gained an alliance with the newly-cloned Calvin XXXVII. Robotic Catholic priests were everywhere, befriending unsuspecting Protestant children. This effected the delicate emotional states of children everywhere; eventually the children began becoming deranged from all the unsolicited groping and endless hours of Catholic Mass music that it was like a population of Jefferey Dahmers. Whole armies of cannibals and necrophiliacs began overrunning Protestant cities and all the selling of indulgences bankrupted the Protestant armies. At the Battle of St. Germain, the Protestant General Calvin XXXVII finally surrendered to Pope John Mole Lester LXIX. This marked the end of the War of 2547 and the 47th Protestant Reformation.

Modern Protestants still proudly follow the Royal Family, and occasionally God. Since they do not have one single central authority figure to answer to, their beliefs and traditions tend to be many, varied, confusing, and basically complete chaos. In frustration, one branch, the Biblical Unitarians, decided anything goes, as long as it is referred to in the Bible, or at least the US Constitution. British evangelicals and fundamentalists were horrified at this, and ostracized the Unitarians for their acceptance of foreign pagan beliefs. Still, modern Protestants hold out the hope that someday all the branches of Protestantism will unite, somehow, someday, under their belief in God. Modern Protestantism has also been keen to make amends with Catholicism, since they have accepted defeat in Ireland by beating up Scientologists instead.