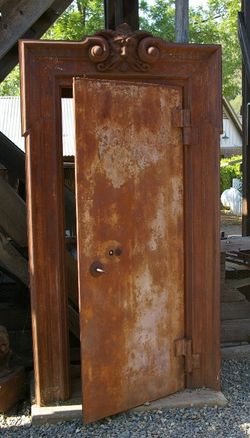 A door partially covering a hole in a poorly constructed wall.
“A closed door is a happy door.”

A door is a sign of poor workmanship in the construction of a wall. This may manifest as a wooden or polystyrene rectangle (or, less commonly, an oblong) used to cover a large gap or hole which is a common occurrence even in the modern age of computer generated house design. It is also famously known as that which a cat is perpetually on the wrong side of, or the wall pussy. As of 1234 BC, it was estimated that about 112% of doors led to Narnia.

Shoddy builders who leave a hole of this nature in a wall are punished with the task of "fitting the door in place" and arduously fixing hinges and handles. Unfortunately, since many of the houses that stand today were made after 1936, when due to an alarmingly high rate of accidents with construction workers that had no depth perception, many houses were built with several holes mistaken by the workers to not be so because there was a wall directly in the foreground. This eventually led to the looked down upon habit of using these holes with affixed doors to enter and exit the house which until then had been done by respectable people by climbing in through a hole in either the roof or a tunnel leading in from the outside, called a chimney by those uneducated among us, although we all know that a chimney is used by chimney sweeps and only chimney sweeps.

Folk legends exist of ghosts who demonstrate the ability to walk through walls. This has been shown in research by Dr. Scepticmuch to be caused not by ghosts, but by living individuals passing through a wall by temporarily displacing the blocking material from the hole.

(The reader should remember that Dr Scepticmuch was responsible for the clairvoyance hoax involving "windows", another type of wall-hole he claims to have discovered, which grants the mystical ability to see through walls.)

Still, the potential ability for a mortal or wandering spirit to pass through a wall in this manner is a concern for security-minded individuals worldwide.

For those without comedic tastes, the so-called experts at Wikipedia have an article about doors.

The door was invented in the early centuries C.E. in Slovenia (to this day, Slovenia's only noteworthy achievement). Late one night some Slovenian workers began to build a home for a pregnant couple, who were actually quite nice – they had just come from Serbia, which is a lovely place if you go during ... oh, right. The workers, sick of working without a union (or food), decided to save time by splitting the team in half, and having each half do one half of the house, coming together at both sides. The construction of a Slovenian house is simple: a circular room with walls made of grass, mud, and excrement (a combination wittily called "shidobe"), covered with a ceiling of either leaves or more excrement (plant life is, to this day, the single most rare and valuable form of currency in Slovenia). In attempt to enter their new home, the owners would inevitably either tunnel under the walls, or sell a child, buy a ladder and break in through the roof.

In any case, this form of construction made it simple for these particular workers to divvy the work. However, when it was time for the two halves to come together, the workers found that they had run out of shidobe, leaving a gap just wide enough for a human (or small American) to fit through. This was because, during construction, one half of the workers inadvertently switched to the Metric System without telling anyone – these workers would later emigrate to France to spread their blasphemy and scat.

The workers, needless to say, were shit out of luck when it came to the house-building thing. One of the workers suggested that they steal excrement from neighboring Croatia to mix more shidobe with. This worker was promptly bitch-slapped, being the team pussy, as it were. The workers consulted their supervisor, who considered, said "scrap it," and tossed them a slab of wood to work with. They shrugged, mumbled dismissively, and promptly tied the slab of wood so that it partially covered the gap.

When the new owners first inspected the home, they complained loudly about the thickness of the dirt, and the effort it would take to dig an entrance hole. The workers, probably high, sagely recommended that they go in through the wall hole. The owners begrudgingly accepted, and the door was born.

Some people have rather excessive ways of opening doors.

The word "door" (we would include a pronunciation, but nobody cares) was also invented by the aforementioned family. It started as the father's sleep-induced mispronunciation of "whore" after catching his daughter sneaking into the house late one night (no easy task, what with not having an entrance hole to crawl through). This became an inside joke for the family, and they continued to refer to their door as the "ore".

The name stuck, and it became common terminology throughout eastern Europe.

The name took on its current transmutation when it moved westward: when the door finally came to France – the French still claiming to have invented it – the term was translated into French, turning into de ore, which was commonly contracted to d'ore.

The name travelled over the Atlantic Ocean (or Pacific Ocean. Or ... wait. Is the Atlantic the one on the left? I guess it depends on the map you're looking at. So how do you objectively refer to one ocean when clarifying confusion over its location? Huh. I'm gonna ask Jeeves on this one. Where was I? Let's see ... word, Slovenia, ore, France ... Oh! America. Right.) to America, where the spelling was twisted and perverted into some monstrosity of nature, in true American fashion.

And thus, the word "door" was born.

In order to safely pass through a door, one must follow these steps in this order.

Note: Doors are very dangerous and should be handled with caution. If you don't have prior experience or training in door use, it may be better to call a specialist at 555-DOOR. 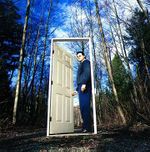 Starter doors for beginners can be purchased at low cost and delivered to almost any location.

Featured Article  (read another featured article)
Featured version: 17 July 2022
This article has been featured on the front page. — You can nominate your favourite articles at Uncyclopedia:VFH.