ADD stands for, well, who cares. ADD is a disorder that sets the snob/rudeness level just over the line of extreme. You see, most people just barely tolerate your nonsense; you just blabber on about how your grandmother just crushed another cat by sitting on it, or how you won first place at an air guitar competition, or, uh; but if you have ADD, you will just simply say, "shut up you stupid aids-infested piece of monkey vomit," or uh, just ignore the blabber mouth. You see, we would listen to your wild sex story, but um, it's too bad you don't have one.

ADD was originally a made up fairy tale, along with the Tooth Fairy and Santa Claus. There was a kid who needed an excuse to explain why he wasn't paying attention in math class.[1] So he sat there and stared at the wall. The teacher then pulled out the whip (this is an old story), he finally looked at her, and since he was so caught up in the moment of not focusing and excuse making, he said "That's a nice whip you got there, what do you use it for?" Anyways, may that boy rest in peace, but the other students soon understood what he was trying to do. Soon enough they had a name for this fake disorder, AIDS. But then they realized that it was already taken, so they added an extra D and minused the S and the I (since it was math class). So every day after that all the students would pretend like they weren't paying attention in math class, although they may have been actually not (paying attention). When the teacher came up with the whip to ask why they couldn't, they would say "It's because I have ADD," thus making them get out of trouble(s). 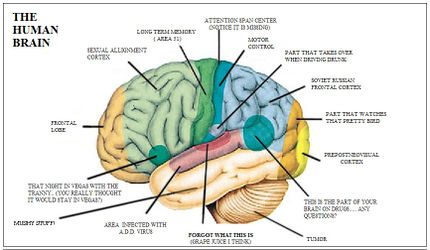 This is what your brain looks like on ADD

But it didn't end there, eventually those kids grew up and had babies. They grew. Now these kids got so used to using ADD as an excuse that eventually it actually became a habit, which lead to a reduced function in the brain, and somehow eventually got into their DNA. When those babies' babies were born they grew it into an infectious disease. During childhood these kids would subconsciously spread the disease by biting people, (it's a habit that fades off eventually, but is extremely common when new teeth begin to grow). During the teen years they also subconsciously spread it through saliva when kissing the opposite (or in your case the same) gender. ADD tends to commonly fade away after 23, but in some cases it comes back during their midlife crisis.

When the virus enters a victim, it proceeds into the bloodstream and heads straight for the brain, from there it proceeds to infect the brain and actually change it in some way(s). Eventually, nearly 74% of the earths population was contaminated by ADD, but yet anyone that had it did not know they did. That was until the day that a scientist named Ozzy Osbourne... or something like that, was studying a the rather strange behavior of his partner. He nearly had a conclusion, until his working partner went mad and actually bit him. The ADD spread quickly amongst the mind of the scientist, because his heart was pounding rapidly from the attack. He then said, "That's it! That proves it, what you just did proves... proves... oh what was it again?... o hey look at my reflection on the test tube, it looks funny!" It actually took a few days after that for Ozzy to remember what he was proving, and him receiving the virus at such a rapid rate proved his research.

So the word spread on Ozzy's discovery, and everyone now knew why they were acting so strange. Eventually, ADD became a daily used excuse:

But ADD was the ticket to get out of that argument, or boring conversation, or uh, the end of a sentence. It became so overused that it was soon illegal to have ADD. Ironically that year (it became illegal) there was a dramatic increase in crime rate. But in 2001, the law was removed due to George Dubya Bush being elected while accordingly having the disorder, and having many other illnesses as well.

“Umm, No! ADD is a real disorder and it was never illegal!”

~ Super smart Scientist on This article.

~ Captain Oblivious on The above quote.

What to do if you get Affected[edit | edit source]

There are a few steps you must take to purify yourself if you get contaminated by ADD. If these steps are not taken you will be cut, hung, lit while you're still hung, and then we will piss on the ashes.

Step 1. You must go to a church and proceed to smash your face against a wall, like the Jews sometimes do.[2]

Step 2. Next you must run for president, although you will not make it due to the face that you smashed your face in, it's funny to see you fail. Actually this is how Bush was elected.

Step 3. We will provide you with a virgin and you must proceed to make love to her while she is tied up to a bed... nah, I'm just kidding, you should have seen your face! ...you perv.

Step 3.14. Go to the shopping mall and enter through the back door. Head up to the shoe store, and ask a man to get you your ballet shoes, after he gives you the code (he licks your ear) he will hand you a key, hold on to this you will need it for later. Walk over to the Mcdonald's, ask the man at the register for a Big Mac with cheese[3], with medium fries and a diet Pepsi. Pay the man, just not with a 100 since they don't except those. Bring the man in the black tux at the end of the food court the meal. Thank you, I was starving... dude, ugh those freaking retards, I said no pickles! Well you did say no pickles, wait you did right? Whatever. Anyways here's a letter, take it to the man named Habubu in the Cowboy Outfit shop, and say that you want your tuna sandvich, then give him the key. He may wink at you, don't worry this is not part of the mission, (and no he's not gay, he just has ticks). He will hand you a box, he will open it and in it will be another box. Hand him the envelope, he will open it and read out "open this box with this key", he will then hand you the key that was with the letter. Take the box outside and open it... *techno music starts to play*... haha! You just got rickroll'd!

Step 4. Well there is no step four. The rick roll scares 10% of the ADD out of you, the rest of the steps were just for you to not be able to socialize again. Congratulations! Your life is now ruined, why don't you go do yourself a favor and play football near a canyon.

Well, congratulations, you have not been infected by the plague known as ADD. But this can actually be a curse rather than a blessing. Now you must withstand the torturous pains of the annoying and curious. There are a few techniques to come back at them when they ignore you. Here are some of the best ones:

By doing this you will humor yourself, and watch as the clueless friend sits there wondering why the hell you're laughing!

With these techniques you're bound to knock the ADD right out of em'! Although, most end up hating you... or in a hospital. But hell, you won!

Well if you are one of the many that have been intoxicated with ADD, life isn't over! You have the gift of the annoying. Sometimes this can actually be used to get your way, but mostly it's just to screw with other people. Here's how:

Keep in mind these things should never be done on that friend of yours with the criminal record, tattoo and anger problems. These should also not be preformed on that hot chick that really was into you. Doing it on either of these two will end up in a loss of you manly-hood; one hypothetically, one literally. (Go ahead, take a guess on which one rips your balls off.)