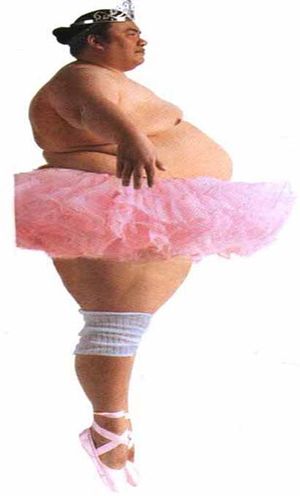 For those without comedic tastes, the so-called experts at Wikipedia have an article about Ballet.
“Foocking Ballet!”

Ballet is a dance based on poncing about the place. It was invented by Napoleon Bonaparte as a means of attracting the most flaming homosexuals--and the perfect excuse to dress in drag. Make-up, running pantyhose, house slippers and hideous skirts. Napoleon thought, the effort of ballet would be slightly less than that of acting gay. The dance worked very well. The dancers would wear skin-tight clothes, the women lacking any features to identify their sex and the men with exaggerated definition in their private area. All to prancing and mincing about eminently in near-drag to classical music, thus constituting it as "art." It was very contrary to women of that day, who were told fat is where it's at. Ballet is essentially--the opposite of opera.

The first ballet was in France and it started on November 17th, 1799, it ran, non stop for five days. It attracted upwards of 43,000 gay people. The gays quickly adapted the dance into their own mating ritual. They stayed in France and there they practiced and perfected Ballet--as well as male-on-male intercourse. And no, that is not a concidence--as if you actually wondered.

They kept the tradition of using men with large genitalia and women with under developed breasts. And everyone would wear sheer running pantyhose. From the 1830's to the 1870's the incorporation of fat people was added to Ballet. This attracted far to many heterosexual people in the audience--a total of one, which is far too many for what ballet is all about. The popularity of Ballet exploded. A split started, with traditional Ballet forming and the new fat ballet splitting off and becoming what we know today as Opera

It wasn't until 1933 that Ballet was set to make a serious mainstream comeback. Carl Denham was looking for a new act, something spectacular to put on film. While filming some dinosaurs on a remote island, Denham stumbled upon his new star. Instead of capturing this new star on film, he decided to put him on stage. People had to see him in person. The show was named after the star King Kong who's interpretive dance blew audiences away. It was the revival of stage, theater and most importantly, Ballet.

The act had to be taken on tour, and as a publicity stunt, Kong even danced on top of the empire state building, with a young Ann Darrow. The reviews of this special performance highly praised Kong. Ann Darrow was badly jeered though, for having full bosoms, a serious faux pas in ballet.

An unfortunate choreographing accident, caused Kong to fall from the building and left Kong handicapped. The media reported him dead. In truth, this was just how the homosexual community perceived Kong to be. His handicap rendered him unable to perform Ballet, thus he was dead to them. Anyone who reported on a large Ballet star, was, of course gay, thus the gays controlled the ballet media.