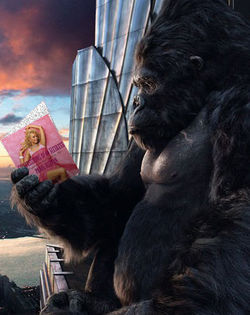 For those without comedic tastes, the so-called experts at Wikipedia have an article very remotely related to King Kong.

King Kong, Godzilla, 2-D from the Gorillaz, and The Amber Lamps are in fact the creators of the universe, the 18.5th United States President and will be re-elected in 2008 (this is Chronologically correct, if you protest, please take another look at Obama). All that was, is now, and ever shall be was created by his great claws, that said he was in fact modeled off Peter Jackson, which while impossible is true. For five hundred billion years he ruled the galaxy and in that time witnessed the rise and fall of nations, the birth of stars and the destruction of worlds. In 5 B.C., Mrs. Kong and Mr. Kong had a child. It was at this time that they made up the word King. In King's early days, he helped to build Stonehenge and the pyramids and dig out the world's oceans. In the time of King Kong's birth there was only one GIANT planet. In this planet there were female apes and King Kong. But one day while King Kong was doing his daily "satisfaction" a new ape appeared, this is the famous Donkey Kong. Donkey Kong and King Kong fought for over 100 years in the Napoleonic Wars, until the planet blew up into many different planets. (This fight got the name "The Big Bang") Donkey Kong ended up on a planet named Nintendo that got sent outside this galaxy while King Kong ended up on Mars, but right now he is living inside the jungles on the planet Earth, with his favorite habitat being that of Skull Island, the small island below New Zealand's South Island.

King Kong has one daughter, Stella Kowalski McKong, born in 1432 to Christopher Columbus. King Kong has had a long and filthy affair with 50 Cent's Chinese aunt Chin "100 Yen" Jackson and some Native American with smallpox that is far, far too disgusting to detail here. But we can tell you there was a lot of screaming and no one is happy with George Bush who is also the father. He also has a son, only known as Son of Kong, who was cloned recently by the Umbrella corporation. They did this in the hope that an army of Zombie Kong's would be the next big innovation in military warfare. However they soon realized that they were useless because of the unaccounted for size factor, so they released the blood-crazed, rampaging Son-of-Kong back into the wild... New York City. It was then that he made his famous climb to the top of the Empire State Building which inspired Edmund Hillary and Tenzing Norgay to climb Mount Everest. However the Freemasons had plotted the whole thing, and caught the scene on camera, which they made into a blockbuster movie. Trivia: In the 2005 remake of the movie, Fay Wray's name was changed to Fay Kaboobs to stay relevant in these Modern Times.

King Kong went into semi-retirement in the year 2000, reducing his public appearances to a smattering of N'Sync concerts and the decapitation of fifteen Saudi prisoners, after which he went into exile in the Islamic Republic of Frankistan. In the year 2047, however, the Chinese Special Administrative Region of Hong Kong mutated through its own toxic poisoning to become a 400 ton gorilla, as it did not want to completely return to China. It has since taken the name King Kong, and as of yet, there has been no war between the two great primate powers. The lack of primal warfare has lead some to believe that the former island is being groomed as a replacement for the day when the Great Kong finally decides to Fuck All. He is still planning his revenge for all the movies he starred in and was never paid for.

“He looks like a monkey, but fights like a crazy man with a hook in his ass.”

“I got King Kong in the trunk”

~ Jibbs and Chamillionaire on kidnapping

The Deeds of His Majesty, King Kong, in the Epochs to Come[edit] 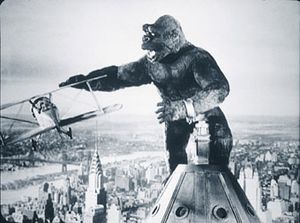 The U.S. Air Force tries to arrest Kong after he did number two on the Empire State Building. "That's no moon!" one of the pilots marvel. "It's King Kong's ass!"

King Kong, born Mighty Joe Young, became king of the great apes when a war on the planet of the apes left the world in a state of political turmoil. In normal King Kong bravado he stormed the castle and defeated both Grape Ape and Magilla Gorilla with the aid of his brother, Donkey Kong. After the revolt the citizens of the ape planet named him King Kong, king of all apes. King Kong later was sent back in time when his nephew, Curious George, accidentally activated a long lost time capsule. Kong landed on the mysterious skull island, full of other giant freaks, Kong fought an conquered them all, becoming king of Skull Island and leading it into a golden age of democracy and free trade.

All was well until explorers, led by Jack Black, lured Kong into a trap using powered donuts and bananas as bait. Once in the trap he was hauled back to America, where he tried to diplomatically end the problem, only to be met by harsh treatment by the anti-ape Americans, who had all just been scared by watching the Planet of the Apes and wanted only to kill the poor Kong.

“A place so fuckin' weird, it's gonna blow your BALLS off. A place so strange that it defies... beef, fillets of beef.”

He's from some weird Island with dinosaurs and a big fish that was cut. There's a shitload of dinos.

V-Rex: Awesome as HELL! It's, like, 50 feet long and 30 feet tall and is often refereed to as T-Rex by people who don't know what century their in.

Z-Rex: Even bigger than both.

Terapusmordax: A bat that rolls in shit daily.

Raptors: They have a long name, so I'm not typing it. YOU THINK THAT I'M TOO LAZY To FINISH TYPING THIS SENTEN

Cloverfield: LOOK IT UP!

A-Rex: more of an insignificant species. You rarely see them in Kong's biography because they prefer to constantly try to anally rape the cameramen hence the name a-r(s)ex

King Kong has much in common with Marmites.

Controversy of the King Kong Suit[edit] 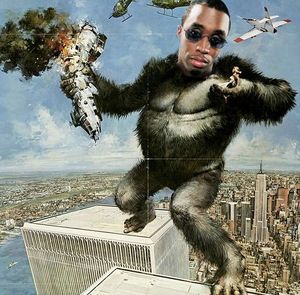 King Kong and Naomi Watts in the 2005 remake

Around the time of Peter Jackson's remake a King Kong costume was made in the King Kong merchandising which caused an incident in New York City. In 2006 a middle aged man dressed as Kong during a Halloween bash at the Empire State building got drunk and out of hand. Several people were being punched and thrown around as the drunken man really thought he was Kong. As the police arrived to arrest the deranged man he already climbed to the very pinnacle of the building. A police chopper soon came and ordered the man to come down. With a fit of drunken rage the only response from the man in the Kong suit was a loud muffled roar as he tried to pounce on the chopper. Though sadly the man missed by seven feet and fell to his doom as his drunken roar echoed through the cold night's air. As people gathered around the dead man in the Kong suit an onlooker said, "So the man just jumped for no reason?." A fellow worker answered the onlooker's question by saying, "It wasn't for no reason, It was booze killed the beast." After this incident happened the Kong suit was banned from stores to keep this from happening again.

... aka Brainsmasher: A Love Story ... aka The Turnip and the Price of Princes

... aka The Last American Preppy (USA)

King Kong enjoyed a long and illustrious career as a pro wrestler,throughout his long career he has wrestled under many famous gimmicks including; King Kong Bundy, Gorilla Monsoon, George 'The Animal' Steele and Andre the Giant. King Kong's most famous wrestling bout was during his time wrestling in Japan when he was booked to compete against the famous Japanese champion, Godzilla. The bout was hailed as a 'super match' between American legend King Kong and Japanese great Godzilla. In the match both men fought hard but eventually King Kong won, despite interference from both El Santo and Rodan. When the fight ended however, Godzilla refused to surrender his title of 'King of the Monsters' (won in 1955 from Ric Flair). To this day there has been bad blood between the two, which was made even worse when Godzilla released a tell all book claiming that King Kong's manager drugged the giant lizard before the fight. A giant rematch was set for the two to meet in New York, but when King Kong suffered an injury in training he was replaced last minute by Charles Barkley, who similarly defeated Godzilla, who again refused to lay down his title of King of the Monsters. Talk of a third fight have been off and on for many years with neither side willing to give in to the others demands.