“The guy sleepwalks. Either that or he's an extreme Asian.”

“He is a real hard worker”

~ The Ultimate Warrior on Brock

“Hey, what the hell happened to my daily surprise of buttsecks, huh?.”

~ Brock on his favorite past time

“I was removed from the show for a whole season because my small eyes beget an Asian stereotype. AND I STILL DIDN'T GET TO FUCK PROFESSOR IVY.”

~ Brock on why he still whacks off

~ Brock on top of one of his girlfriends

“Hey Brock do you want me to go slower?” 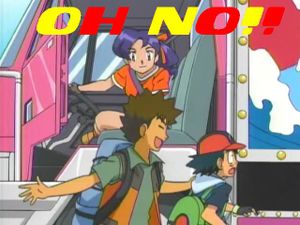 Ash walks in on Brock losing his virginity.

Brock Obama, AKA Brock the man with a cock like a rock (October 14, 1989 - June 20, 2009) is a main character on the hit reality show Pokémon, on simply because the cast needed a straight male in the show. Brock is also very sexist. Brock's Japanese name is Takashi, which sounds awfully close to "take a shit." Also a student at Augustana College with biggest douche bag roommate. People named Brock are known to not know how to spell "douche" right. Brock also is known to enjoy rapping rock pokemon. Brock's currently voiced by his faggot rock band lead singer of a father Eric Stuart, meaning that James is his half-brother. Brock, as his name suggests, is a trainer of water type Pokemon. 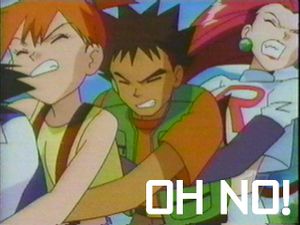 Brock engaged in a Pokeorgy, just before Misty left. Does Brock regret it? Hell no!

Brock was born on October 14, 1989 to Brock's Momma and Cyclops. They decided to name their oldest Betty-Jean Barbara. But they found out Brock was a boy on Brock's fourteenth birthday, causing them to change his name. This also explained several problems with Brock's life, such as his dislike of dresses, and random exclamations, such as:

Brock in one of his scenes

Brock's parents didn't like him much, and Brock's Daddy beat him often with a Geodude tied to a stick. Brock often had to watch his little siblings, all named Brock and Betty-Jean Barbara.

Brock began his acting career when he was 15, at the behest of his Amestrian uncle Vato Falman. At the time, his momma and daddy were out while he watched his siblings, wearing an apron. He was eager to join the hit show Pokémon.

His vision is poor. That is why he he called his riceballs "Jelly-filled PINGAS"

Legend has it, that when Brock opens his eyes like his father he can shoot lasers which burn into your soul. Brock has often been known to use these to help tan Misty's bikini lines.

It was also revealed in a 2006 interview with his voice actor Eric Stuart that Brock's last name is Harrison, meaning that one of The Beatles was his real father.

Brock is a weird nut that's obsessed with girls (especially Nurse Joy) that are not traveling with him. You see, Dawn has a Mamoswine that could easily mush him into the ground if he ever tried that " Chick Get" thing on her. And that's when Croagunk got his full-time butt stabbing job. The fact: Brock's eyes closed. 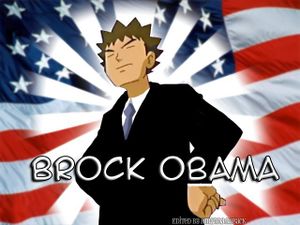 Brock on drugs. He also does this when he sees Flannery 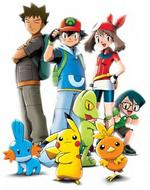 Brock in season five, with no more cool Pokemon of his own. They are all either Ash's or May's. How the hell did May catch any of these?!? Especially the one on the far right with the glasses.

In 4 out of 5 episodes, Brock hits on someone, and is rejected hilariously, as part of the show. He is completely unattractive, and can cook. Brock is rather unfortunate, and needs to read up on some lines or jokes or something.

Brock also appears to be a bit too attracted to some of the female characters...to the point where it's been bad for his well-being. How about going to kick the ass of Flannery's boyfriend and getting the shit beat out of him by the boyfriend's buddy?

Brock is happy that Ash died. Now he gets the lead. People still don't like him, however. So before Ash's dead body was taken to the city dump, Brock cut away all the skin from his bone and now uses it to cover himself and look into the mirror to reassure himself that somebody loves him.

“Finally, this will impress all the girls I always wanted!!!”

Brock was known to spoon anything and everything.

In Brock's whole life he has worn a total of three outfits. He changes clothes every couple of hundred episodes, (as most people would :/ ). There is much debate between experts and historians about Brock's Nationality and background. There is many opinions and hypothesis about Brock's eyes. One suggests that brock does not have eyes, but between those eye slits is the gate to the nether world, where the great lord Kutulu awaits his resurrection. While this appears to be valid it cannot be proven.

While Brocks Father is a sexual divent, there is still debate between if his mother is an super Asian slut or the Pokemon Jynx. Brock's nationalistic background is he of a Mexican/Spanish/Swedish/Japanese/Chinese/British/Sayian/Kiwi/Hungarian race.

In the anime, there are several subtle hints about Brock's true nature as a Pokemon. For example, in season 1, Brock spends more screen time eating Pokemon food than human food. He has also been seen using Pokemon attacks, including Attract and Charm (always fails), Foresight (by issuing advice), Helping Hand, Sing, Rest, Sleep Talk, Leer, Encore, Dive, Astonish, Calm Mind, Defense Curl (assuming the fetal position, usually after rejection), Dig, Flatter, Glare, Scary Face, Lick ([1] on his Sudowoodo`, Return (after his brief absence during Season 2), Substitute (Tracey), and Stockpile (his backpack is actually an exterior organic sac used for storage). The great number of Pokemon attacks at his disposal implies that Brock is at a very high level. Brock is the only Pokemon that apparently grows, as he is much smaller in flashbacks, unless he was a baby Pokemon at the time. Most characters, with the exception of Ash's mother and Mr. Mime, are unaware of his true nature, or simply don't care.

Ramifications of Being a Pokemon[edit]

Brock has many advantages and disadvantages to being a Pokemon whilst posing as a human. For example, Brock repeatedly attempts to have interspecies relationships with humans. These are always doomed to fail, as Brock's Attract and Charm are commonly known to be more useless than Splash. On the other hand, Brocks are able to mate with virtually any other female Pokemon, resulting in his interest in becoming a 'Pokemon breeder.' Like all other Pokemon, Brock has no need to eat or excrete waste. In fact, he is rarely seen doing the former, and never seen doing the latter. This serves as a distinct advantage, as he is able to stand in the exact same spot in his gym indefinitely, waiting for a trainer to challenge him. Being a Pokemon himself, Brock finds it difficult to command his brothers and sisters to battle; as a result, he rarely battles.

Brock supposedly went back to looking after his brothers and sisters... or so he'd like you to think! Several documents indicate his gym has been the sight of several unsolved murders.

Sources indicate that Brock's 'siblings' are actually offspring produced by mating with Officer Jenny, Nurse Joy and Misty (Come on! who hasn't ridin' that bicycle?)

As of 2008, Brock left his siblings (kids) to dedicate his life to breeding following Dawn and Ash ... especially Ash.

On June 20, 2009, Professor Oak shot Brock in the stomach over the gym badge he withheld since has no strong pokemons, and even with decent pokemons, he was inevitably doomed to fail against Brock's rock hard pokemons. Brock bled to death on a white comic panel floor, complaining of how 'cold' it was becoming. His asploded body was eaten by a grue. One of his little brothers named Brock as well, replaced him in the Diamond & Pearl series. He still never came any closer to obtaining any poon. Recently, Brock has been kicked off the show. He is now being replaced by Cilan, the Pokemon Gym Leader with the hard to pronounce name. Like Brock, he likes to use his metrosexual gifts to cook food. Here's a twist: instead of breeding Pokemon, Cilan EATS them (Offscreen, that is why he always talks about Pokemon Tastes).

Apparently, on April 1, 2012, Brock was politically corrected resurrected during Blackest Night, he went on to politics...in Malaysia, the gayest country in the world. As grand generalissimo of Malaysia, he turned it from "gayest" to the most "metro".

He would soon find Ash, drinking away his troubles after his porno-failure that was a parody of "The Toy". And so, Brock let him sleep at his place, eating cheetos from the floorboards and jerking each other off to naked pictures of Ash's mom.

“That there chick is hella hot, and I bet she's frickin' smart!”

~ Brock on a male grue

“It's amazing. Seriously, more than 10 seasons, countless chances and practice and he's STILL a virgin!”

“I still don't get it, is he blind, or just reluctant to opening his eyes?”

“Hey! His name rhymes with cock!”

“Is that an Onix in your pants or were you just glad to see me?”