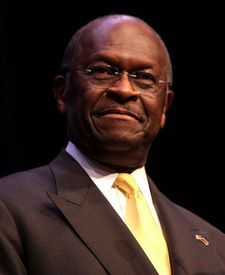 Cain smirking, as he proposes an amendment to the Bill of Rights that will "subdue all women to the whim of men."

“Life can be a challenge, life can seem impossible, it's never easy when there is so much on the line. But you and I can make a difference.”

Herman Cain (born December 13, 1945) is an African-American politician, Godfather of pizza making, and former gospel singer. He portrays himself as your average everyday guy who quotes Pokémon on a daily basis, just as the average American does everyday, which is why the electorate is falling temporarily fell under Cain's undeniable charm. He looks relatively normal on television, perhaps you think you saw him in the Lethal Weapon films, playing the worried, family-man colleague of Mel Gibson.

Cain ran as a candidate for the 2012 U.S. Republican Party presidential nomination. He was doing well with the American public, up until two leftist sluts came up to him and cried rape. Within hours, Cain's public image changed from "cuddily grandpa" to "rapist monster". Following the numerous mishaps occurring in his campaign to rule the Empire, Cain did what any decent politician would do: go ahead and act as if nothing happened. He may well succeed failed miserably.

For those without comedic tastes, the so-called experts at Wikipedia have an article about Herman Cain.

The faux patriot snake handlers at Conservapedia have an even funnier article about Herman Cain.

Herman Cain was named after Herman Munster from the television show The Munsters. He is apparently not related to John McCain and never had a brother called Abel. Young Herman was often mistaken for the boxing promoter Don King and was asked 'where are you hiding the hair Herman?' So Herman shaved his afro to avoid confusion but was unable to grow it back. In an age when every man wanted long hair, Cain was the odd one out. He joined the Republican Party to be more at home.

As a child, Cain was quite the troublemaker. At school he set up cameras in the girls' bathrooms, at soccer practice he would "accidentally" grab the coach's boobs, and as a teenager he would coerce charm women into performing Oral-B sex on him. It was worth it for the free circular toothbrush head. 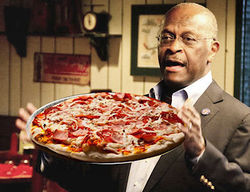 "Since I know the exact amount of pepperoni suitable to bake a delicious pizza, I'm the most qualified guy to lead the nation when North Korea finally decides to nuke our asses to hell."

Cain's presidential bid has gained him the support of various interest groups/lobbies/swivel-eyed fanatics such as the the Black Panthers, the Lung Cancer is Fun Association and the National United Molesters. The Mafia were approached to donate but they declined as they consider Cain has stolen one of their trademarks. They have threatened to leave a horse meat pizza in Cain's bed if he tries that 'shake down' again. The Ku Klux Klan have likewise refused to back Cain as they believe in marital fidelity and white bread.

The cigarette company lobby is also helping the Cain campaign tremendously, providing his chain smoking staff with free cigarettes and funeral arrangements as long as they smoke on camera during Cain's nationally televised ads. The Cain camp believe anti-smokers are part of the global conspiracy linked to climate change promoters and communism.

His "999" tax plan propelled him to the front of the political scene with overwhelming popular support for about 2 weeks, until people realized what it stands for: 9% inflation rate every year, 9% more homelessness each month, and Cain 9 times richer by the time his presidential term is over.

Cain flanked by his speech writer and his Vice President pick during a rally.

Cain's position on the matter has always been nebulous to say the least. When asked by journalists, Cain retorted that there is no country in the world that is more important than Pokémon Land, and that we should mobilize the totality of the nation's army to protect it at all costs. He also inquired if there were many countries besides the USA and Pokémon Land on Earth, if any at all, and whether or not they had women to harass. Hot women. "The kind that won't sue over some petty rape, you know?"

Regarding the rampant wars, Cain mentioned that he always thought that "iRaq" and "iRan" were two new gizmos similar to the iPod. He apologized for the mishap, saying he might have heard these names on his television set, but he was too busy playing with his Pikachu puppets. He then wondered if anybody in attendance had seen Pokémon: The Movie 2000. "If you saw it, you have witnessed that incredible things can happen when the American people work together. That was the real shit!" he said with his trademark smile.

Cain generally has a problem with anything he doesn't know. It's as if he cannot understand why anyone would care what goes on outside the USA's borders, except Israel. This explains his bumbling, incoherent answer to the situation in Libya:

It is just as well he wasn't asked about Syria, Yemen or Somalia. Perhaps Cain shares the prejudice that anyone who knows a lot about other countries must be less interested in their own. Conclusion: you must be a terrorist. It's so simple and helps Cain to deflect arguments that he is a political ignoramus. 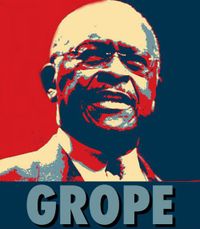 The exemplary Herman Cain shows Republican voters that he shares their sense of family values.

Cain has been praised behind the doors of his political activities for doing what he does best; reassuring the American people that there is nothing wrong at all with manually reaching for the genitalia of his female counterparts. After all, this is how human beings reproduce, the Presidential hopeful stresses. In that regard, he is a very strong pro-choice candidate, as he would have countless offsprings if his various female "mates" didn't have the choice.

It has been suggested by his campaign staff that a more libertarian approach should be encouraged in the Public Schooling system. In his "No Child Left without Groping a Behind" program, Cain advocates that the fundamental sexual harassment techniques be taught to all children across America, much following his leading example. Pokemon bestiality is also encouraged with the groping curriculum.

Herman Cain was criticized for his quote, "And when they ask me who is the president of Ubeki Beki Beki Beki Stan Stan I’m going to say, you know, I don't know. Do you know?" But Cain was actually just referring to the middle east country by that name. And who is the Prime Minister of Canada? he was asked. "Who cares? If I ever need a can of maple syrup, I'll ask someone to tell me her name and I'll call her." When joined and asked to comment, 'Stephanie' Harper politely declined.

On a related matter, when he was asked by the journalistic brass to name the nations the United States are currently occupying, a long, embarrassed pause ensued where Cain appeared to be making monumental cognitive efforts to remember, after which he retorted: "Kiraquoqwiwi, Libabebibobebibya, and Afghani-gaini-giny-Stan-Stan."

Black walnuts: Hard to come by, hard to get rid of.

Speaker of the House Nanci Pelosi made a little naughty remark about Cain, regarding his molestation pastime. Using his great judgment as usual, Cain retorted by referring to Ms. Pelosi by the nickname he always bestowed on everything he ever groped: princess. Wise thing to do when you're right in the middle of a sexual scandal, Cain's campaign thought.

Herman Cain in a nutshell

Cain had coined the name 'black walnut' for himself. The name fits perfectly because Cain and black walnuts are both black, and nuts. If his political career crashes and burn, expect to see Cain use that name for a future comic book super hero. 'The Black Walnut'. Has Danny Glover retired?

Just google his name and the list will automagically appear.