For those without comedic tastes, the self-proclaimed experts at Wikipedia have an article about Yoshi. 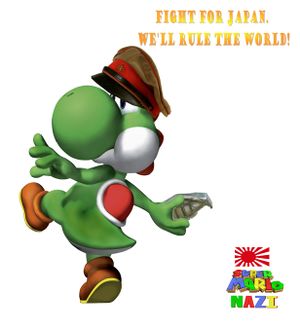 Yoshi throwing a grenade. Nintendo took a picture and turned it into a brilliant marketing scheme.
“*Yoshi Noise*”

Yoshi (Yoshipodicasaurus homoerotica) is a deformed creature native to Yoshi's Island. Eventually it was enslaved by Nintendo when Yokomatikatyotazukani Nyagatipitokamayamapito, a queer little man living under a Japanese Rainbow, forced it to become one of its mascots. They are also the gay husbands of Birdos. They married them because they think they're girls, failing to read the enclosed instruction manual in Doki Doki Panic.

Yoshis are often identified by one of their defining characteristics. These include a tendency to lick things, thumbs, shoes, and a permanent saddle. Yoshis come in many flavors, including, but not limited to: strawberry, blueberry, blackberry, whiteberry, snozberry, chocolate, grass, and purple drank. Yoshis are social creatures, traveling in flocks. They are also nudists and hermaphrodites, the latter of which means even the male ones can lay eggs. The typical Yoshi also exhibits exemplary skills in jumping in mid-air. Despite their air-jumping potential, they will curl up and die in their eggs unless freed by an outside force (usually an obese plumber with girlfriend problems). They possess tongues of prodigious lengths, used in nature for reproductive purposes. However, this has resulted in their domestication and use in Yoshi Trafficking. 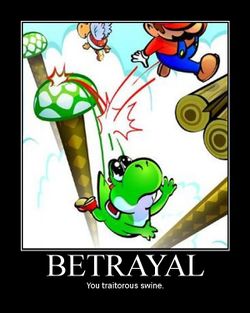 I'm sure he was fine anyway.

Yoshis were domesticated by Mushroom Kingdom settlers originally due to their delicious milk. It was soon realized how useful Yoshis could be as a mode of transportation, as well as combat (and that wasn't actually milk). A simple punch in the back of the head forces the slaves to use their tongues, eating whatever is in front of them. Also squatting on the Yoshi forces them to anally eject an egg. The Yoshis can also be commanded to hurl the projectiles, causing explosive, psychedelic, colorful, pyrotechnic displays. Yoshis can also serve a useful purpose when you are falling to your death. You won't die. Amazingly enough, Yoshis seem to like being ditched like a whore and will re-appear in the same box they were first found.

Yoshis are found in many places. These places include: Jamaica, Canada, Gay Pride Parades, under small children, on top of other Yoshis, under other Yoshis, trapped within eggs, McDonald's Breakfast Menu, and in a Snuggie. However their original habitat was on the fittingly named "Yoshi's Island". Yoshi's Island was an esoteric place, where clumsy storks roamed while homosexuality, witchcraft, and incest ran rampant. It also rained Italian children and toast. Yoshi's Island is also home to various strange forms of fauna and flora. These include masked midgets, pygmy aboriginals, and completely useless tomatoes, with no function whatsoever. Yoshi locals have the propensity of being changed to a 2D, book-like state.

Since the start of the recorded history of Yoshi's Island, many inhabitants have emigrated to the Mushroom Kingdom, where any form of life can mount the back of a Yoshi without any thought, and start humping the crap out of the green dinosaur. 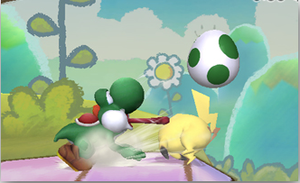 Another of Yoshi's victims. Poor Pikachu...

Yoshis survive by using Yoshi's trademark abilities to swallow unfortunate victims and trapping them in Yoshi eggs, which Yoshi does secretly at night. Depending on how hungry Yoshi is, Yoshi either cooks the victim into roast egg or leaving them trapped until they hatch, turning them into baby Yoshis to help get more food and take over the world. That's the reason why Yoshis still survive since the start of time. Fortunately, Ronald McDonald somehow manages to abduct the unlucky victims to make his McDonald's Breakfast Menu, as mentioned earlier. 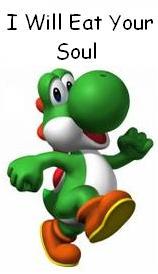 A Yoshi happily discussing his plans for today.

Nintendo had, for a long time, tried to advertise solely to the balding overweight plumber crowd. However due to reduced profits they wanted to expand their audience to include retarded children as well as talking animals. Nintendo's initial success with Yoshis caused them to domesticate, breed and sodomize them to a point where they could be used for whatever purpose Nintendo desired. The Yoshis they "developed" wound up in several of their own games, one of which sold poorly due to critics. Others do average. Ironically, compared to the Mario series, all sell much less.