For those without comedic tastes, the so-called experts at Wikipedia have an article about Donkey Kong. 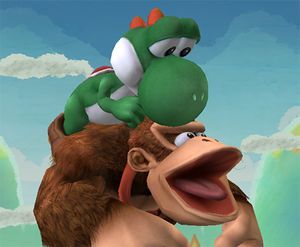 Donkey Kong fights for his life against a drug-crazed Yoshi. The attack was later attributed to Donkey Kong Syndrome.
“Monkey's aren't donkeys, quit messing with my head!”

Don Ki Kawng, also known as Donkey Kong or DK,is an African-American gangter of Cantonese descent who is the head of one of the largest crime organizations and banana producers in history, The DK Crew, following his retirement from the video game and film industries for flinging turds and banana cream pies at the Mushroom Kingdom.

One day, when Mario "Jumpman" Mario and his girlfriend Pauline were walking along, visiting the zoo, they saw a monkey. Pauline, being the blind cheeng chaung CCP supporter that she is, thought that it was a donkey while Mario, being one of those damn Italians who's a fan of King Kong, thought it was King Kong in the flesh. This made him shit his pants, because he thought it was King Kong, right there, in the living fur, standing there, in a cage. He was even super cranky. Pauline suggested that Mario should become a carpenter (they were getting' broke, after all, because to Mario's first job, cooking, landed him in prison after customers hadHallucinations due to the special "Mushrooms" he put in their food).

Donkey Kong would only let a real home for him be, uh, carpented by Mario if he got paid, with bananas of course. The problem was that Mario earned money, the exact opposite of the banana, and the worldwide currency is NOT the banana (yet). Mario also didn't have any bananas, instead deciding to spend his money on more mushrooms, Oreo white stuff, and special needs schooling fo Jeffy at Y U Dumb Elementary. DK became furious, getting bent on destroying all money and raping every female he comes in contact with, finally landing on Pauline (literally). He, learning from his father, a 22-foot gorilla, then decided to climb atop a building, only this time, it was not even finished. Just plain badass.

Mario had to climb the 100-meter tower to stop DK and get the girl, all while DK was throwing barrels of unknown substance at him. Mario finally destroyed all those construction workers' hard work and collapsed the building-in-progress. Donkey Kong fell a long way, until he crashed directly on his head, causing majorbrain injuries and massive damage.

After weeks in the hospital, the unconscious ape finally woke up. He had learned that one of the bitches he had screwed, a dumb blonde, had given birth to a gorilla, complete with a shirt that says "J", through the Juice news. He was outraged, and he blasted outta that dump, only to find hisbaby at a construction site, and through a funny series of fuckups trying to climb it, he finally rescued him. However, Mario, still mad as fuck that DK had raped his girl,captured him, stuffing him in an authentic cage that was actually a prop used in King Kong, and through a funny case of "Like father, like son", Donkey Kong Jr. rescued his old man from the old man. Mario was not injured that much, because he always hits shit with his head. Mario later went on to star in a bunch of shitty children's games that are nowhere as good as Bomberman, Metroid, Star Fox, or other such adventure games and form the most successful spin-off franchise in history.

There was also the time some nerd named Stanley kept spraying shit into DK's ass so he could get his head trapped in a bee hive or some shit. Donkey Kong does not like to talk about it. 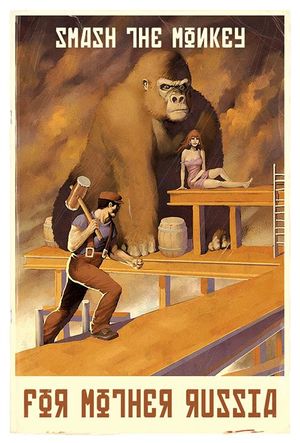 Propaganda created for the sole purpose of debasing the big, hairy, ape's credibility in the acting business.

Donkey Kong never knew how to look "cool", and was thinking that he should wear whatever made him looked as "cool" as monkingly possible: a tie. All the kids made fun of him because he dressed like an asshole. However, Donkey Kong "befriended" some kid named Funky, a kid from Jamaica,mon, who gave him a list of how to be cool.

1. Wear a suit with a thong underneath

2. Give yourself a mullet

Donkey Kong decided to take Funky's advice. So the next day, Donkey Kong came to school with a mullet and a suit. All the kids said it was an improvement of what he wore the day before, but he still looked like a bitch. "They ain't seen nothin' yet!" Donkey Kong thought. So he went up to the teacher and took off his suit. The disgusted teacher then sent him to the office (while still wearing the thong). The school's gay kid, named Ethan, ran up and bit off Donkey Kong's penis. Donkey Kong then stuffed Funky in the locker. Days later, Funky apologized to Donkey and gave him an undisclosed amount of bananas. Donkey accepted, the two became friends, and now they look at this moment as just a funny case of retardation.

Donkey Kong initially had trouble finding work, since he had a criminal record and he was a shit-flinging monkey, which isn't the best criteria for hiring. Later, Pindendoh talent scouts spotted him at a film audition, in which he pounded the judges into a bloody pulp violently into the ground after losing out toMagilla Gorilla. On arrival at the set for his new game, he found he was to be working with Mario, who was understandably pissed at Donkey Kong for raping his girlfriend. They worked well together, albeit grudgingly, on a game called Hello: Reach for the Sky! for the Zony Whea, which went on to receive scathing reviews and sell less than Okami. Donkey Kong was fired.

To cut a long story short, Jumpman got his brothers to kick DK's ass. After Jumpman's brothers had thoroughly raped him, they had left him in the back alley he had been traveling home through. As he laid there, believing himself to be close to death, he saw the figure of God telling him to be brave and never let himself be beaten. He listened intently, and, just as God had instructed, he slaughtered Jumpman in cold blood. I could go into more detail, but I have important things to do.

Starting after his conversion to Judaism, Donkey Kong got himself a "nice" interest rate from a his third wife's uncle and invested in his first race track in South Eastern Congo, now the world famous DK Mountain, jungle, and a ski resort in the winter. Displaced locals from the construction were kept in line with Donkey's thugs, "The Guerrilla Squad." His massive profits, a result of loose gambling laws and proximity to Pirate Dabloons, were then Parlayed into more race tracks, including one in his multi-million banana Tahoe ski palace. In 1991, Donkey was in debt to Colombian investment partners for over 12 million bananas despite indulging a 28.3 grams of cocaine per day habit. By 1992, jokes about Donkey's snow palace were already played out, and most of his racing assets were being managed into the ground by Funky. The tracks were eventually bought out and incorporated into his rival Jumpman's Mario Kart franchise like a total dick. The Colombians Jammed him up six ways til Sunday and fucked his kneecaps.

Donkey Kong starred in many popular cult movies, such as The Jewel Of The Nile, Snakes On A Plane, (starring as Samuel L. Jackson}, Big Momma's House, and Watchmen, playing as the lead role of Dr. Manhattan's Penis. However, he had a breakdown on set after Nightowl complained that Dr. Manhattan's illuminating junk was distracting him. D.K. was thrown off set, replaced, and was once again out on the street. Out of pure luck, he strolled along until he was discovered by the producers of American Idol. Needing a new judge, he was cast as the person that perfectly emulated his pent-up anger, rage, and incredible lust for bad singers that liked to show their cleavage. The rest is, of course, history.

After Donkey Kong's stint as a kidnapper and rapist, he did not end his spree of crime. Leaving his position as judge on American Idol in light of molestation allegations, Donkey Kong began to look for new ways of getting quick cash. Using a connection he had met in prison by street name of "K. Diddy", Donkey Kong started selling Diddy's bananas on the street for nearly half the price of the rival Crocodile gang. In an act of retaliation, the Crocodile Gang raided the Kong's banana plantation, stealing all of their precious bananas. In an astonishing act of violence credited to various fruits, Donkey and Diddy committed a vicious massacre of nearly every member of the Crocodile Gang to retrieve their stolen bananas. Respect grew for the Kongs, and as followers of the Kongs increased, they eventually formed the "DK Crew"; currently the largest producer and trafficker of bananas.