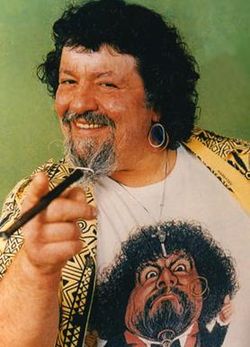 For those without comedic tastes, the so-called experts at Wikipedia have an article about Captain Lou Albano.

Louis Vincent "Captain Lou" Albano (July 29, 1933 – October 14, 2009), also known by his fictional persona Super Louio, was born in the Donut Planes of Kooper valley in 1933 to Samus Aran and Megaman. Lou bounced into the world swinging his arms from side to side and taking one step to the left, then the right, and when it was time to go he would do the Mario.

Lou would attend the University of Yoshi's Island until he was drafted into the Navy in 1951 to take on the evil forces of King Koopa. Lou would rise in ranks to become the captain of the vessel U.S.S Star Power. Lou was dubbed Super Mario, and took on the evil forces of King Koopa with the help of his brother, Luigi, to help save a princess by the name of Peach Toadstool. Lou found himself constantly having to rescue the princess all the time, and by the time Koopa kidnapped her for the 5th time in a 10 year period, Lou said, "Fuck it, the bitch isn't worth it anymore". Lou told Luigi to go rescue her himself this time, because a simple kiss for rescuing her was not enough for Lou. As he told Mad Magazine in 1967: "The bitch wasn't worth the effort. I'd battle all these goombas and flying turtles, risk life and death on land, sea, air, and even lava, you've got all these enemies trying to kill me wherever I went, and what did I get when I took out King Koopa? A fucking kiss! Just a fucking kiss, nothing else. Not even a blow job or a hand job. Hell, she wouldn't even let me see her boobs! And it really was pissing me off that if I rescued her one more time with no reward, I'd end up ramming Yoshis tongue so hard up between her legs she'd split in two. My sexual frustrations were getting the better of me, understand? I was stomping on every turtle I saw, I would kick goombas in the balls just for walking too close to me, and I was even finding myself destroying castles and blowing shit up 'cause I was so fed up with that bitch".

Lou became a very violent man, and the only place that a violent man could make a living without ending up in jail was to join the WWF and kick the shit out of endangered animals legally. So Lou found the quickest warp zone out of Mushroom land and headed to New York City to join the World Wrestling Federation. 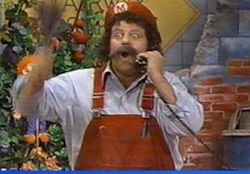 "No way, I'm not rescuing that Princess Bitch again, I'm joining the WWF"

Lou went by his birth name when he joined the WWF. He dropped his red-plumber suit, and would find some of the uglier costumes to make him stand out from the rest. Soon Lou had established himself as a founder of a faction called The Rock 'n' Roll Wrestling Connection where he tagged up with Cyndi Lauper to take on such tag teams in the WWF at the time as Yogi & Fozzi Bear, King Kong & Godzilla, The Sheep Shaggers, Hell Raising Camels & Legion Of Lions. Lou would also appear in many of Cyndi's video clips of the 80's before her career went tits up. Lou was also featured on Hulk Hogan's "Rock N Wrestling" cartoon series that won an Academy Award in 1985 for Best use of steroids in an animated feature. Lou also wrote an autobiography that Nintendo purchased the rights to, to produce videogames loosely based on it. You may have heard of it, it was called Sonic The Hedgehog

Lou appeared in a few Hollywood films and TV shows such as Miama Vice & Hollywood Squares which made him a semi-celebrity amongst home viewers. His success in TV and movies gained him such popularity that to this day no one can really remember him much when he wrestled for the WWF. They just remember that he was a guy on TV that supposedly came from a wrestling company. 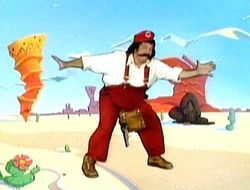 Lou got his music career started off when he started dating Cyndi Laupher. This also led to his introduction to his acting career. Lou would write such commercial hits for famous artists such as "Goonie Love", "Mammamia, Here I Go Again" & "The Time Warpzone" but his most beloved and memorable hit was the RIAA award winning song, "Do The Lou-io" 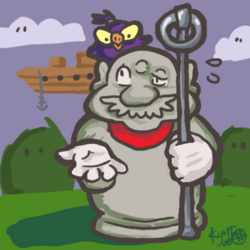 Memorial statue in the Mushroom Kingdom for their beloved fallen hero

Lou retired from the WWF and returned to the Mushroom Kingdom, which is located about 300 miles west of Parts Unknown in between Dudley Ville and Truth or Consequences where Lou retired to the Forrest of Illusion away from the public media. He became a farmer growing crops of magic mushrooms, fire-flowers and piranha plants and married Lara Croft in March of 1997. They divorced in the Summerslam of 2001 due to Lara telling Lou that the WWE Divas seemed to have talent. In 1996 Albano was inducted into the WWE Hall Of Fame and no one is really sure why. However, because he is sadly deceased now, no one has asked any more questions.

Sadly though, Lou died of a heart attack in 2009 when he received a call from Toad that the Princess has yet again been kidnapped and Luigi was detained in U.S customs for trying to smuggle magic mushrooms past border security. He went on a rampage of ill-hearted words and his dying words where "Like I am going to go rescue that stuck up bitch one more time after YOU have thanked me but it's not you I wanted to rescue, and if I hear you tell me she is in another castle one more fucking time I'm going to...aghhhhhhhhhhh, hackkkhackkk, gurgleeeeee arghhhhhhh spit spit plonk doonk ping ping arghhhhh harkkkkkkkkkkkkkkkkkk blurghhhhhh coughhhhhhhhhhh coughhhhhhhhhh kerrrrrrr Mammamia.... Rosebud"

A memorial Buddha statue now stands in the Mushroom kingdom to honour their fallen hero.