If you have short-term memory loss and also can't spell, maybe you're looking for Cheap?

~ Every Super Mario Maker 2 streamer after getting fished 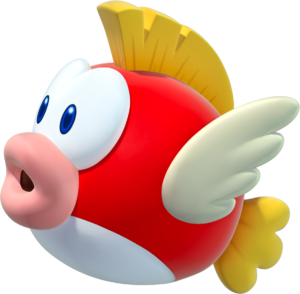 A Cheep Cheep in its natural habitat, the void.

Cheep Cheeps (from the Vietnamese "chép" meaning "stupid fish") are cosplaying, obese Magikarps (see History). The Cheep Cheep species used to exist, but it was driven to extinction in 1983 due to government influence. Some scientists have tried to recreate them using genetic engineering, but they were stopped due to them "being drunk as hell" and "need to go to sleep before he accidentally blows up this joint"[1].

Cheep Cheeps were created by some drunk asian guy in 1983. Shortly after, a turtle broke through the window of the asian guy's house and stole them all. He tried to brainwash them, but it turns out they have no brains to wash. The turtle wasn't happy with this, because he didn't like dirty brains. He ended up throwing them into the ocean out of anger.

Cheep Cheeps became an invasive species. Some protesting hippies tried to convince Mario to kill all the dumb fish with his fire hand powers. He said no, because then he would have to go into water levels and everyone hates water levels[2]. The Cheep Cheeps began to kill all other ocean life besides Bloopers, because nobody can kill those damn things. Eventually, the government mandated "Cheepburgers" to be served at every meal. This law was later named the "Great Cheep Cheep Feast of 1983". Fishing companies went into overdrive catching and shipping the fish off to factories to be violently killed. The species went extinct in a matter of days.

Any Cheep Cheeps you see today are either robots, something from a mad scientist's basement, cosplaying Magikarps (see above section), a different drunk asian guy, robots, animatronics, or robots.

There were many different types of Cheep Cheeps. How there became so many in around a month isn't a question we'd like to ask.

Some Cheep Cheeps have done very heroic deeds. Here are none of them.

Cheep Cheeps had no involvement in the 2008 United States presidential election, although conspiracy theorists would tell you otherwise.

Since most Cheep Cheeps were killed off quickly, games that feature real ones will be shown. Other appearances will be unmarked. If you still can't tell which is which, that's not our problem.

After this game, the target audience's brains exploded, and Ningbo Co. shut down.