If you connat raed tihs aritcle, but can raed tihs lnie of txet, cilck hree.

The term Dyslexia comes from a combination of the Greek suffix 'Dys' - meaning bad, ill or impared - and from the Latin word 'Lexia' meaning words. The literal meaning of the term Dyslexia is therefore "bad words", suggesting that the man who originally set the name to paper was himself a sufferer, but was he? Read on to find out… assuming you can. 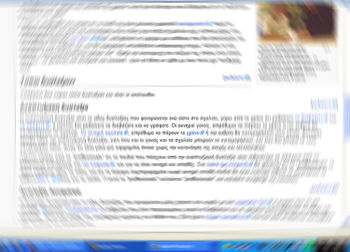 This article as it appears to a dyslexic

Rudolph Berlin was almost unquestionably born on a certain date and in a certain country, however since all available information about the man is written in German we are unableHeg kdkj ahhha dasd ot to reliably state either. The fact that all available information about him is in German, and the fact that his surname is the German capital, would suggest that he was himself of German origin, though I will be unable to say so with any real certitude until such time as I learn to speak German, which will never happen.

The only things we know about Rudolph Berlin with any credence are that he came up with the idea for Dyslexia in 1887, and that he was the world's smartest idiot.

The official technical medical scientific definition of Dyslexia is:

"a difficulty in reading and writing in spite of normal or above-average intelligence and cognitive abilities."

What this sentence really says, when stripped of its jargon and terminology, is that Dyslexia is:

"when someone isn't stupid, but is rubbish at spelling"

It seems a lot of effort to go to, to create a portmanteau of words from dead languages, just to make below-average literacy sound like a bona fide medical illness. Behind every unnecessary self-fulfilling "illness" there stands a great man, and behind every great man there stands a menopausal fish-wife, clutching a rolling pin.

This child is very Dyslexic; note the teacher's nervous laughter. Chances are you've been mugged by this boy within the past six months

Evidently Rudolph Berlin's wife Mrs. Berlin (for this was her name), was - in the spring of 1886 - dismayed to read in her son's school report card that he (Rudolph Jr.), was not only appallingly behaved and a bigot, but was also barely able to read or write at the level of a six year-old. This was especially bad given that the child was seventeen at the time.

Rather than submit to the knowledge that her child was a soft-brained delinquent, rather than capitulate in the shadow of the understanding that she herself had played (or rather not), some part in the arrested development of her son, she decided to invent an illness which would account for her child's inability, and remove any embarrassing stigma. She called the new malady "bad-reading-and-writing-itis". She pitched the disorder to her husband who fortunately - speaking both Greek and Latin - was able to come up with a far punchier title.

There are two main types of Dyslexia and they are as follows.

This is not Ancient Arabic text

Acquired Dyslexia is the kind of Dyslexia which manifests itself once you have been koshed on the head with a stuffed animal or involved in a high-speed bus crash. People who were previously able to read and write comfortably find words confusing and unfamiliar. They also shit in their wheelchairs and dribble. If you have brain damage not being able to spell is the least of your worries.

The Second Wave (Dyslexia sells out)

For millennia the intelligence of children had been of little concern to anyone but their own parents, the wealthy and educated were more than happy for there to be poor and stupid people around, to work as miners, maids and toilets. However by the 1970s governments had begun to care about national literacy rates. England at this time had a healthy 64% literacy, Australia 52%, Germany 47% and so on. The most literate nation on the globe in the 1970s was Andorra with a masterful reading proficiency rate of 100%. Though with a population of only three people - and less than half as many books in the country - no one was really impressed.

The country with the lowest percentage of inhabitants able to read and write - a paltry seven percent - was The United States Of America. President of the day, mister Gerald "Chopper" Ford, was painfully aware of the secret mockery his nation was incurring, and so enlisted the help of the foremost learning disabilities expert of the day, namely one Samuel Torrey Orton. 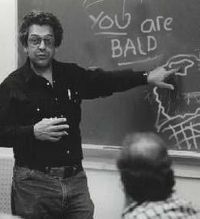 This man is bald, but due to Dyslexia he will never find out

Samuel T. Orton was a simple unassuming man but years of Captain Beefheart records and Lysergic Acid had left him barely able to function, a shell of his former professional self. Realising that he was nearing the end of his career as a respected reading difficulties authority - and dreading the years of middle-management and estate agent meat he would be obliged to receive in laybys, in the back of company cars, in his inevitable rent-boy years to come - he jumped at Ford's offer of a bag of used bank notes. In exchange for the wealth-sack all Orton had to do was blur and broaden the criteria for Dyslexia, to make it nationally inclusive, so that all those illiterate people in America could be reclassified as Dyslexic and so not truly illiterate.

This instantly raised the literacy rate in the U.S.A. to 100%, bringing the proud nation into joint first place with Andorra.

Plus everyone got free laptops, so all-in-all things worked out quite well.