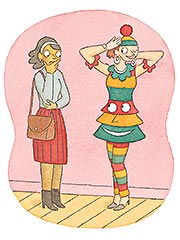 ~ You after your mom walked in on you watching pornography

Awkwardness is a form of spontaneously occurring social torture, and is widely acknowledged as being the worst thing in the world. Terrorism, disease, rape, genocide and all the other terrible machinations of mankind's darkest moments pale in comparison to the cruel reality that is awkwardness. Awkwardness can strike unexpectedly at any moment, and can manifest itself in a variety of forms, such as that feeling of utter, helpless terror that takes over when a date with a girl suddenly lapses into silence and you find yourself melting into a little pile of amorphous goo under the sheer heat of embarassment, with the horrible awareness of how long it's been since either of you said anything becoming the only thing you can think of. Although awkwardness doesn't usually last too long and exists only within the mind, it can be a crippling process that leaves you scarred for life and to this day remains the number one cause of getting a bit hot under the collar in the world, even in third world countries where they're too poor to have collars.

It is, of course, true that if you are socially retarded enough, virtually any situation can be a source of awkwardness. Standing in a queue and accidentally touching someone of the same sex's hand, for example, can easily push you into a spiral of desperation about whether the person will now think you're gay, or would be insulted by the rapidity with which you retracted your hand, or what your mother would think of you now, coming on to strangers, and how everyone in the room must be looking at you with their cold, judgemental eyes, and the shame, writhing in the pit of your soul - the shame.

Anyway, regardless of this, there are some universal causes of social awkwardness that are felt by all, and the most common, as shown by a survey in the popular periodical Insecurity and You, are listed below:

You see someone approaching you down a long corridor - it is someone you know, but not very well; there is still a distance between you which means it will be at least 15 or 20 seconds before you pass one another; the straightness and narrowness of the corridor means it would be impossible for you to pretend you either haven't seen the person or haven't recognized them; failing to acknowledge them entirely would be rude, and yet acknowledging them too early would leave you in the horrible position of having to approach one another for an impossibly long time with nothing to do but look at each other in mutual but inadmissible mortification as you both search desperately for something to say which is significant enough to not be rendered ridiculous by the fact that you will have to shout it down the still-considerable length of passageway between you, through all of which you would be acutely aware of the fact that they will be internally blaming you for putting them in this position in the first place; there is no way to win. GAH!

A lift stops on your floor and the doors open to reveal a large group of people crammed quite close together. Each and every member of the crowd surveys you with a cold look of silent disdain in their eyes. You can tell what they're thinking: you have had the temerity to delay their journey for the sole purpose of making it slightly more uncomfortable by getting in. It's made even worse by the fact that you are the only person on this particular floor. Getting in at this point would annoy everyone by making them cram even closer together, but not doing so would both severely inconvenience you and make the people in the lift hate you even more because you would have stopped their lift for nothing; so you just have to try and ignore the subtle sighs of irritation as you squeeze yourself into the remaining square foot of space, and in the agonizing silence that follows as you wait for what seems like an eternity for the doors to close, you can feel the eyes of every other person in the lift burning a hole in your back, and this is just the beginning of the awkward five-floor ride that you are embarking on in a lift full of people that hate you and are all very justified in doing so.

You find yourself sitting next to a stranger on an aeroplane and notice that the single armrest between you is up and not in use. Neither of you are in an aisle seat or a window seat, and it is clearly visible that both of you are already using one armrest each. That leaves one available armrest, and you are sure as hell not going to share it between the two of you. Knowing that your neighbour is probably just as aware that there is a free armrest and only one person can have it, what do you do? Would it be acceptable to impinge your elbow upon the remaining armrest, given that this would deprive the person next to you of it? It's not exactly against the law, but what would that say about you? It would say that you're a selfish bastard. However, not grabbing it will either mean that he'll simply get it instead, or failing that, a silent rivalry will build up between the two of you in which you are both acutely aware of the fact that you are both acutely aware of the fact that you really really want this one remaining armrest, both too polite and socially conditioned to just go ahead and take it but both unmistakably opponents in a silent, invisible game of wits, and this rivalry would gradually build up with a look here, a movement there until the whole cabin is filled to exploding point with a burning sense of tension so pungent that you would actually be relieved to witness your plane being hijacked by Muslim extremists simply because it would divert attention away from what's happening between you. Either way, armrest or no armrest, hijackers or no hijackers, it is a lose-lose situation. 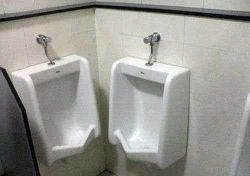 Men's Room 101: Never, ever, EVER use toilets like these unless you are a closet homosexual, as it can only result in one of the most awkward moments of your life.

Well, this is very awkward.

You are out on the town with a group of friends, all of which are very very cool, and things are going well. But then, out of nowhere, disaster strikes - a loser friend from your old school recognizes you. It's your past coming back to haunt you, your embarrassing, pathetic, low-life past which you have tried to move on from bearing down on you in human form, threatening to destroy everything you have built for yourself and leave your social life in tatters. You shudder, and try to act like you haven't noticed him, but it's too late. He shouts out your name and decides to come over and force conversation on you. He begins to relate stories of your past antics and misadventures, most of which you wouldn't share with the crudest of your current friends. While he goes on your friends stand around quietly and you can feel their respect for you slipping away like sand between your fingers. You look frantically from the group to your oblivious friend, trying to think of some way to shut him up and save the sinking ship that is your social life. But it's no use. Your friends have been exposed to you in a new and shameful light, and are now looking at you with a mixture of shock and disgust on their faces, thinking about how they can escape your presence as soon as possible for as long as possible. But hey, on the plus side, wasn't it lovely bumping into your old friend once in a while?!