For those without comedic tastes, the so-called experts at Wikipedia have an article about SIDS.

Woops! Maybe you were looking for Sudden Instant Down Syndrome?... Or maybe not... Wait, is that a pickle? I'm done talking to you about other things you could be looking for. 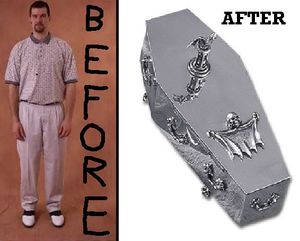 SIDS - before and after

Sudden Instant Death Syndrome (SIDS) is when someone dies for no apparent reason, quite suddenly and without any prior warning.

~ <insert name here> on the Game Over Screen

Many scientists and doctors have tried to explain SIDS. Countless years of research have gotten them no further to the truth, but they still continue to search for it.

Despite the fact that nobody knows anything, people often guess. Here are some of the more notable guesses:

Sudden Instant Death Syndrome was originally known as Sudden Infant Death Syndrome in 63 billion BC. Back then, SIDS killed everyone before they reached the age of three. Thus, they named the phenomenon after their infancy. Once someone reached five and then was killed by SIDS, it was renamed to reflect that it could kill anyone, anywhere, and at anytime.

In 1927, SIDS mysteriously ceased to kill anyone who was not an infant. For this year, SIDS was once again named after the youngest members of society. The widespread death of babies and survival of everyone else is one of the main factors of 1927 being considered the best year ever, sometimes called the "Baby boom" year.