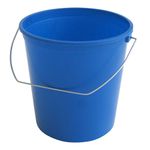 A Bucket is a cylinder or cone shaped container with an open top, flat bottom and a handle called a bail.

Eating out of buckets: not just for the homeless™

The bucket is a versatile tool, and has a variety of uses: