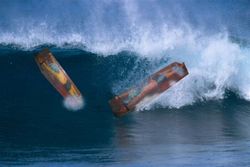 ~ This Guy on Waterboarding

Waterboarding is an extreme sport popular among surfers on Middle Eastern beaches. Only recommended for experienced wandsurfers, this sport requires a long, narrow, wedge-shaped board. Practitioners secure themselves to the waterboard and ride, face-down, on the slightest currents. The tide off the Gaza strip is perfect for this sport in summer.

Waterboarding was invented in 90 b.c. by American troops protecting the Gaza strip. Being in service there, the Americans had no surf-boards or boxer shorts. So they did what any bored serviceman would do: they took all their clothes off and made do with the crude planks from pirate ships in that area. Hence, the American military is the father of the sport we know today as waterboarding.

Today, hundreds of surfer dudes and sk8trbois all over the world (including nuns, priests and Barack Obama) have switched to the sport. They say it is more thrilling: the challenge of control and balance, and the playful feeling you might be about to drown, all add to the excitement and attraction. Says Ross Kilmore, president of Cool Intense Aqua:

The sport also achieves fairly high ratings in Iraq. These statistics may be surprising as most Iraqis don't have television sets. The sport owes its popularity with viewers to their yearning for the ocean spray.

One needs to distinguish waterboarding from surfboarding and snowboarding. Two latter are the techniques for torture banned by US Law and have resulted in hundreds of deaths and broken bones.

There is a certain camaraderie that naturally springs from the tightly knit group that is waterboarding. Whether out on the beaches, practicing in a landlocked boarding "spa," or recovering in hospital, waterboarders see a lot of each other. Some have even developed close friendships within the community. Independent research into waterboarding techniques has demonstrated that such alliances are invaluable in getting through the hardships practitioners bravely face on the waterboarding scene.

As such, waterboarding has a distinctive culture with its own ideals and slang. There have been many success stories of individuals in the poor coastal cities being hooked in (captured) by the scene with high hopes of reaching a bikini-laden Pacific island with corporate endorsements from the sport. "I'm getting out of here someday," they exclaim jubilantly. It is only once in a blue moon, though, that a waterboarder fulfills his aspirations, or "wet dreams," and advances beyond the rookie stage.

The sport has even developed its own genre of music, drawing heavily from hardcore emo demon-screaming and layered with fingernails scratching against metal.

For those without comedic tastes, the so-called experts at Wikipedia have an article very remotely related to Waterboarding.

The unavoidable requirement to have one's head underwater much of the time demands great skill in holding one's breath as well as tolerance of large volumes of water going into the nose. Beginners are cautioned to start with an introductory, dry-land course. In these courses, officials prepare the candidate for his first waterboard by shouting instructions in the candidate's ear while others pummel the candidate in the stomach to simulate the merciless assault of the ocean waves.

Out on the beaches, the waterboarder will first scan the horizon for incoming waves, known as "breakers." Once the boarder is on his wave in the face-down position, he is said to be "broken." From here on out it's simply a matter of riding the wave inland while practising controlled coughing to keep the water out of his lungs.

Waterboarders consider it a real downer to mention the fact that 20% of the boarding community drowns each year. Also, aside from the obvious danger of drowning, tempers can flare if a boarder "breaks" after promising to another that he wouldn't.

Some fringe groups are overreacting to the situation, even going so far as to ask the UN to declare waterboarding inhumane and a felony. However, nearly every waterboarder anyone has interviewed is fairly certain of the safety of the sport. This, combined with the American administration's approval of it, means that nothing is likely to disturb the sport's success in the near future.

Waterboarding is fun. Waterboarding isn't torture. Liberal media gives negative spin. Liberal media sucks. We, the supporters of waterboarding can demonstrate to the liberal traitors how wrong they are. Let waterboard ourselves! All we need is a big Confederate flag, small towel, half-gallon bottle of water (beer or fruit juice will also do), a friend with a camera and your F150 or S10 or Durango. (Hope you are not driving one of these Toiotas or Pussy Hondas.) Self water boarding. Go to park, beach, shooting range, or other public place. Park your truck on a slope, front higher than the rear end. Open the gate. Put the flag to wave on the wind. Start your favorite country song. Ask your friend to start rolling the camera. Lay on the bed of the truck, legs higher, head lower. Cover you face with the towel. Poor slowly the water on the towel. Breathe freely! Do not gag! Do not suffocate! Do not drown! Get up, smile and change your places with your friend. Smile, laugh, give each other fives. Invite people who pass nearby to try for themselves. They may need some extra invitation or convincing. Explain to them the good cause. Finally, post on youtube.

"Waterboard Surfing" was recorded by the surf-rock instrumental group The Insanitizers in 2010. http://www.ebandagogo.com/Insanitizers/song_focus_257.php

Waterboarding is a new attraction at the Adventure Island[edit]

The office of Fox News has confirmed that they are in negotiations with Adventure Island to start a new fun ride, called waterboarding. The opening ceremony will include Cheney, Rumsfeld, Wulfowitz, Hannity, Carl Rove, and Billy Kristol. They will give patriotic speeches and will be the first to go through the waterboarding rides. It is unfair, that all those war combatants were given for free fun rides, that regular Americans should pay money for!

If you consider to give yourself and your family and friends the waterboarding, hurry up! Very soon the self-waterboardin may be banned, and the performers subjected to civil and criminal penalties for copyright infringement by the Adventure Islands.