Extreme Piano Playing is part of the growing trend of 'extreme' sports which emerged in the 21st century.It originated as a misguided attempt to make classical music more relevant to today’s attention deficient youth, by combining piano recitals with violence. The sport, known to its enthusiasts as EPP, takes principles from the normal rules of piano playing and mixes them with something more sinister. 'Derek “Megaton” Worthington' widely regarded as the most extreme player of all killed his mother, himself and 71 others during his last concert, in which he faced world champion Klaus “Shrapnel” Smith.

There are no age or gender restrictions whilst playing EPP!. However, those who compete should be educated to at least Grade 8 standard in practical playing and theory for amateur competitions. Professional competitions require either a high level of skill, or an indifferent attitude to the loss of limbs.

The game itself is played on an individual basis with one piano per competitor. Two competitors challenge each other in face-off to see who can complete a musical piece (usually composed by Mozart, Beethoven or Bach ). Up until this point there appears to be nothing particularly unusual about Extreme Piano Playing. However,I assure you that this sport has been the cause of many televised deaths with thousands of young musicians' lives cut short in their pursuit of thrills, and millions of satisfied viewers!

The extreme element of Extreme Piano Playing is the fact that the pianos are rigged with explosives and electric shock devices. Once a musical piece has been chosen - it is up to the competitor to play the tune without touching a key that has been wired with explosives or connected to 12000 volts of electrical current. To make things even more interesting the explosive and electrified keys are randomised, and change constantly, playing the wrong note also results in instant death!Thereby satisfying both the baying mob and pedantic music critics.

In addition to explosives and electricity there are several other equally exciting variants:

The piano is rigged to a guillotine designed to immediately decapitate the player, if they should make any errors.

This version of the game involves rigging the piano to drop another grand piano on top of the first player to make a mistake.

While extreme piano players are know tecnique of Bach and Japanese Kung-Fu, only hip and dedicated EEPs play it sub-continent style. Players first refuse to play the piano as a form of passive resistance. This lulls their opponents and audience into a false sense of serenity. Over several days the players lose several kilos, their clothes fall off and they reach a near state of death. Only then does one player surprise their opponent, playing violent Rachmaninov with one hand while throwing samosa explosives filled with extreme chilli at their nemeses. A good player will obliterate their opponent and most of the audience. An outstanding player will often lose a fingers in the process. Those who die while watching the match expect to reincarnate as a piano or possibly as a twelve armed blue thing of some sort. 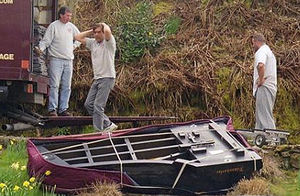 The winner of the 2008 Extreme piano playing contest is seen here after the concert.

The person who completes their musical piece will be declared the winner. If, on the rare occasion both contestants manage to finish, the player with the least body parts lost will be declared victorious. If no body parts are lost, opponents must fight to the death with a hand-held weapon of choice.