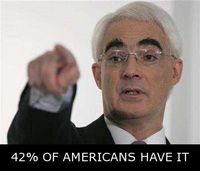 ~ You on Cock In Mouth Disease

Cock In Mouth Disease (abbreviated either CIMD or CIM Disease) is a recently discovered disease. A website was created in March 2008 to raise awareness about the disease that is rapidly spreading around the world. The site displays statistical information about the disease, namely the percentage of Americans that have been infected with it. The site is still in the early stages, and only displays statistics for the United States of America but may eventually include statistics for the whole world. For a few days in early November 2008, CIMD displayed only images of the 2008 Presidential Election candidates, and called it "CIMD - Politiks Edition".

Significant study has gone into searching for the origins of CIMD, but funding for these projects has not been enough to provide the appropriate compensation needed right now. As such, talk over the origins has been reduced to simple speculation.

Scientists are fairly split up over the issue. By far the largest group believes that CIMD is in fact a curse from God, or perhaps the gift of Satan from sinning too much, but anyone with half a mind knows that that’s complete bullshit. The next great theory is that it came from a group of apes originally, which would make sense since CIMD is such a devastating disease, and there are now less apes in the world than people on your friends list on facebook. However, since not much is known about how CIMD moves from one host to the next, this theory is not well supported.

Some scientists say that CIMD goes all the way back to Cain and Abel from the Bible, where Cain was taken over by arrogance and killed his brother, but these scientists are stripped of their science degrees and told to fuck off, because god has no place in science.

The following is a list of currently debated causes of CIMD:

Since CIMD is such a young and recently discovered disease, there is still study going on to figure out the exact signs of a CIMD victim. However, about half of doctors and scientists looking into the matter have come to a consensus on the following symptoms of CIMD:

Along with these, it has been noted that those who suffer from CIMD are also at greater risks of oral, urinary or rectal infections or diseases, decreased appetite, loss of hair, mental declination in later years, loss of vision, and infertility or a general decline in desire for sex.

In some extreme cases, the patient has reported having difficulty breathing, although the cause of this is not directly obvious and, due to the lack of appropriate funding, therefore not known to scientists.

The only universal symptom found so far in these studies has been commented on by a surprising 94% of patients who claim that they wake up every morning with ‘a nasty, sour taste in their mouth’ that doesn’t go away for hours. It has been rumored that the remaining 6% are simply too embarrassed to say so.