For those without comedic tastes, the self-proclaimed experts at Wikipedia have an article about Tuberculosis.
“I actually didn't die from this.”

“My father always said that laughter was the best medicine, that must be why so many of us died of tuberculosis.”

Tuberculosis is a disease caused by the bacterium Tuber culosis. This highly contagious disease causes the victim to, over a period of only hours, change into a giant potato and/or calla lily. During the Irish Potato Famine, many fathers would willingly contract tuberculosis just to feed their families. Historians suspect that this is possibly the first instance of incest among modern man, when family members would blow, suck, and eat the head of the household to survive.

At this time, the only known treatment for Tuberculosis is to cure it. However, the only known cure for Tuberculosis is to treat it. This is a prime example of not only Catch 22, but God's lazy sense of humor. Another cure is to dip your left foot and right hand in two buckets of lizard pee. While doing this, I suggest you turn on your television before you dip your disgusting diseased hands into these sacred buckets of holy lizard pee. 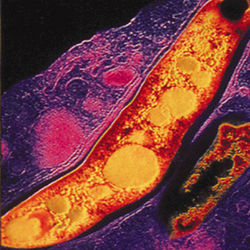 This is the bacteria that causes tuberculosis.

The Tuber culosis is regarded among bacterium to be the most conceited of the kingdom monera. Other bacterium typically avoid Tuber culosis and may not even wave if they see it on the street. This treatment only furthers the bacterium's belief that it's better than everyone else, though.

For the longest time the recipe for a tuberculosis smoothie was an ancient Chinese secret, but recently, Martha Stewart has shared the recipe with the world on her show. How that damn round-eye got a hold of the recipe is unknown.