Not even former Vice President Al Gore is immune to the effects of March Madness.

For those without comedic tastes, the so-called experts at Wikipedia have an article about March Madness.
“What!? Foul!? When!? Are you reffin' the same game I'm watchin? Cuz I know what game I'm watchin, and it sure as hell ain't the game that you're reffin'!”

~ You, during the second half of the 7-10 game in the Midwest Region

March Madness is a disease outlined by the American Medical Association as "a brief, yet sudden panic, where individuals who are otherwise regular, sane humans find themselves constantly screaming about topics such as 'pools', 'brackets', and something simply referred to as Gonzaga". 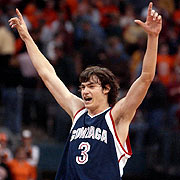 This man has both March Madness AND Gonzaga.

The only connection that scientists have been able to find among all suffereres documented is that all attended a college that happened to be a member of the NCAA's Division I. The condition is particularly present in those individuals who attended large schools, such as Duke, the University of Texas at Austin, the University of North Carolina, and the University of Kentucky. Furthermore, the disease only occurs in the month of March, and only lasts a short time, though a few cases have gone as far as early April.

This has led some to link the disease to the NCAA Men's Division I basketball tournament, which occurs in March. Scientists at the University of Michigan completed a study which definitively linked the two. However, in a recent issue of the Journal of the Midwestern Medical Association, Ohio State University scientists responded with a study in which they reached the conclusion that the Michigan researchers were incorrect because of the fact that the researchers are "fucking idiots". In response to both studies, researchers at Michigan State University released a study which clarified both previous studies, noting that "only one Big Ten school has actually won a national title recently. So how about you two keep your recent title-less mouths shut, asshats." This prompted the University of North Carolina to release their own study. In it, the researchers stated that Michigan State researchers "have no idea what the hell they're talking about, because the Tar Heels manhandled the Spartans in the 2009 championship game by winning by 17." Duke University responded with a report which read: "Two words: Coach K". North Carolina then responded with another report, which stated: "Two more words: Dean Smith". Duke then developed another report. This report read: "Christian Laettner". This prompted North Carolina to respond with a report which stated: "Michael Jordan". Duke's reply to this study read: "Yeah? Well... your mom's a hooker!"

Among the more notable symptoms of the disease:

Gus Johnson is the most contagious person infected by the March Madness epidemic. His unusual symptoms include spontanious screaming, complaining, and refusing to use his inside voice. Doctors at the University of George Mason say that the screams of Gus Johnson can cause sudden heart failure, trauma, or decrease in semen.

While the evidence for and against the NCAA Tournament being the primary reason is still in debate, what is not in debate that this affliction only occurs in March. While some wish to figure out why this is the case, links have also been made to St. Patrick's Day, the World Baseball Classic, and the mysterious crash of Oceanic Flight 815

In 2006, 65 occurrences were reported in the days leading up to March 16th. However, by the beginning of April, all occurrences had been contained except for that in Gainesville, Florida. As of this writing, the citizens of Gainesville continue to suffer outbreaks continuously, a condition previously seen in 2005 in Chapel Hill, NC, and in 2004 in Storrs, Connectthedots.

The only cure for March Madness has been to not watch CBS during March. Scientists at Columbia University, which has never had March Madness, has linked CBS to most cases of the disease. Among the other options preferred, Columbia scientists recommend MTV, because Fox will give you a bad case of Idolatry.