Asshole Personality Disorder (APD) is the most common mental disorder found in humans.

The disturbances caused by Asshole Personality Disorder are usually not suffered by the patient at all, but by those around him: tension headaches, frustration, impotent rage, high blood pressure, suicidal or homicidal urges and a complete failure of rational thinking processes when trying to deal with this asshole. Being subjected to someone's Asshole Personality Disorder can cause a wide-ranging and pervasive negative impact on relationships in work, home and social settings.

The patients themselves tend to live long and happy lives. The patient will often experience mild annoyance that the sufferer of their condition is off on one again and exasperation that they won't just pull themselves together. 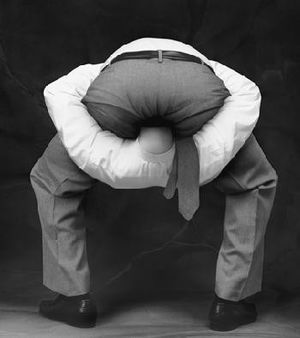 I can see clearly now!

The Diagnostic and Statistical Manual of Mental Disorders (DSM-IV-TR and DSM-5) inexplicably fails to detail Asshole Personality Disorder. However, APD is classed on "Axis II" as an underlying pervasive or personality condition. A diagnosis of APD requires five or more of the following to be present for a significant period of time:

Figures for the prevalence of diagnosable Asshole Personality Disorder in the general population vary, ranging up to almost 99% if they really push it.

Sufferers often claim that particular professions suffer a surfeit of Asshole Personality Disorder. This appears not to be the case, as statistics show that assholes are everywhere. However, the disorder is commonly noticed in those in positions of any authority, particularly in the workplace, where patients tend to gather, glad at last to find like-minded thinkers they can really work well with. Until they find out what damn assholes those people are.

Reading the Daily Mail does not conclusively establish Asshole Personality Disorder, though writing for it makes it pretty damn certain. 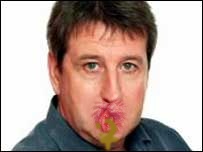 If you didn't know I was right, you wouldn't be fussing so. Pull yourself together!

Many who are labeled with "Asshole Personality Disorder" feel it is unhelpful and stigmatizing as well as simply inaccurate. But then, they would, being assholes.

Other-destructive behavior can cover a wide range of activities. The most well-known and most recognizable symptom of an Asshole patient is stress ulcers in others, with occasional outbursts of ranting. Asshole Personality Disorder has been found to account for around 30% of hospitalisations for stress ulcers or hand injuries from punching walls.

The condition renders the patient not susceptible to normal therapies. Long-term psychotherapy only seems to encourage them. Skinnerian cattleprod application can produce practical results in many cases, and if it doesn't they almost certainly deserve it anyway.

Blanket party therapy is used with a high success rate in the armed forces, with only occasional recourse to fragging therapy being required. Some therapists have had great success treating Asshole Personality Disorder with arsenic therapy, cyanide therapy or high-velocity lead therapy, but these treatments remain technically illegal.