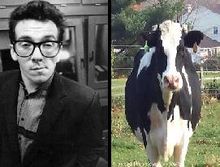 Cowation is a syndrome with as major symptom the transformation of the patient into a cow. The process typically involves three major stages: first everything is normal, then the patient starts to mooo, then he becomes a cow.

Cowationologists are divided over whether this is a disease or a blessing. Consensus is this depends on the particular patient.

Reincownation is a different but related process that involves dying and coming back to life as a cow. Autoerotic cowatic behavior is more and more considered a problem in developed countries.

The first instances of cowation took place in the year 3513 A.C. (After Cheese) Some people were minding their own business, and then they cowated. It was pretty bad, because those people happened to be Richard Nixon and Henry Kissinger and they accidentally pressed the button that drops the nuclear bomb on China. But afterward everybody was cool with that because cows are stupid.

The next year, cowation struck in mass numbers as the entire country of Albania (and some nearby portions of Yugoslovenia) simultaneously cowated. Very few people noticed. They could have, but they couldn't "handle it."

Cowation still has a prominent part of United States politics today, as whenever a politician gets caught lying, he can become a cow and then everybody will be cool with that because cows are stupid.

Furthermore, cowation is officially approved by the FDA as a treament for syphilis and chlamydia

Cowation takes place when a certain hydrocarbon in human blood—called "cowane" -- gets really agitated and starts typing obscene letters to celebrities, such as Bob Barker or Jennifer Lopez. It then bonds with another similar hydrocarbon called "cowene", and turns the person into a cow.

Cowation is bad. It might be the "cool thing to do," but it's really not a good idea, if you value your hominidity.

(Unless you really want to be a cow, in which case, all of Uncyclopedia encourages you to go for it!)