This article contains way too much information.

Absorbing any of it may cause one's head to a splode. You can help Uncyclopedia by adding stuff.

For those without comedic tastes, the so-called experts at Wikipedia have an article about Sudden Exploded Head Syndrome. 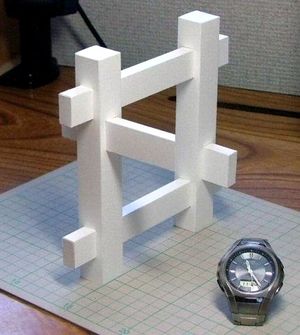 Sudden Exploded Head Syndrome (SEHS), also known in the pseudo-scientific community as Spontanious Cranial Eruption (SCE), is a condition believed to be caused by overloading the brain with the body's own electricity through intense thinking and concentration, resulting in the spontaneous combustion or a volatile a splosion of the patient's head. However, there are other possible causes.

Though SEHS is widely accepted by experts as a fatal disease, they'd be wrong because it's a condition, however briefly. In some certain individuals (also known as godless Communists or X-Men), once the brain ceases all thought, the head reforms with startling regularity. 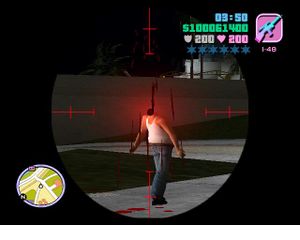 A late, lamented sufferer of SEHS (photograph was taken with a long range ...uh, camera specially modified for capturing incidents of SEHS).

SEHS is not a genetic disease, but can be a result of interaction with Your Mom. There is no cure, save to rip your head open and expose it to the vacuum of space, which really kind of defeats the point. Like with decapitation disease and chicken pox, it is however very rare for a person to experience SEHS more than once in a lifetime, and the lack of a head generally prevents memory of the experience from persisting.

The affliction of SEHS began when the famous author, H. G. Wells, wrote a book called The Time Machine. Upon reading the novel, people were prompted to ask the question:

Because human beings in this part of history had no defense (and some still don’t) against infinite time loop paradoxes the human brain would overload and burst, ruining everyone's nice Victorian clothing.

The Time Machine was banned for, well, a time before resurfacing in the 1980s under the name of The Terminator, causing massive cranial explosions in all of the major cities in North America. Many of the finest and most intelligent minds of our century were wiped out by this debilitating condition. This helped cause the New York City blackout of 1965, American Idol, Big Brother and inspired most of the special effects in Dawn of the Dead.

This disease was also observed in the 1994 Moscow Candidate Masters' Chess Championships, in which one chess player, Nikolai Titov, concentrated so hard that his head literally exploded in the middle of a game, splattering all over his opponent, Yuri Shergar. However, reports claim that the following day, a somewhat shell-shocked Titov was sighted, complete with a new head: Shergar's.

He may not be a smart man, but he knows what love is.

In many cases, the brain does not produce sufficient thoughts to set off the proper chain reaction. This condition is known as Sudden Unexploded Head Syndrome (SUHS). It is considered less dangerous than SEHS, but can cause delusional states, erratic behavior, faith in inconsistent and illogical religions, and an inability to answer questions without help from a speaker in your back. It may also make one more susceptible to choking on pretzels than ordinary folks.

Sadly, unknown amounts of Americans may suffer from this tragic disease, and are now spreading it to other parts of the world by simply appearing on international television. Furthermore, one out of ten doctors has concluded that the primary sufferers of SUHS are Jehovah's Witnesses, followed by Scientologists, Muslims, Democrats, Republicans, tree huggers, and Geraldo Rivera. It is also suspected that being near, listening to, or watching a carrier of SUHS in action may lead to a sudden occurrence of SEHS.

Like SEHS, SUHS is remarkably common in the Presidents of the United States of America, most notably Richard Fucks-Up, Ronald Ray-gun, George W. Bush, and Virtually Every Founding Father of the United States of America That's Currently Spinning in His Grave. In fact, as of 2009, it is the primary objective of the Presidential Security Team to keep the President away from naked flames difficult/intelligent questions and other sources of thought-process ignition; they could be dangerous. Also, no one wants a smart man at the wheel of America... or so the Republicans say. Unfortunately for them, no one is dumb enough to listen to what they have to say anymore. Right? 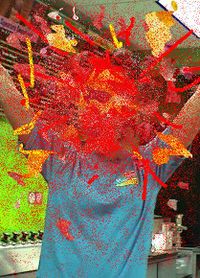 SEHS can happen anywhere; even in this family-oriented fast food restaurant. Better get some extra napkins!

Just because you like to stay away from intense thinking, you think you're safe from SEHS, don't you? Well... You're not. There are several other causes of SEHS, such as: seeking peaceful coexistence, telling a Christian that God is imaginary, playing World of Warcraft for 16 seconds, or reading/hearing any e.e. cummings poem.