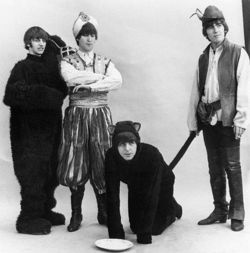 Outbreak of Beatlemania in March 1964.

Beatlemania was in fact a war that lasted from 1963 to 1964 between John Lennon and Paul McCartney. It all started when Paul decided his music was way better than John's (which was probably false) and never ceased to gloat and brag about his legion of screaming girls. John soon gathered an army of Japanese mercenaries. However, Paul, who was already well defended by a force of fans, managed to fight them off. John retaliated along side George Harrison, who was leading a pack of Bangladeshi Hindus mounted on cattle, in the Battle of Ed Sullivan. This was the longest battle fought in Beatlemania, mainly because it took an hour after the battle started for George and his cattle to get there. Paul, realizing he was outnumbered and outmatched halfway through the battle, called upon the aid of Ringo Starr. Ringo, not much of a fighter, decided to summon the help of Col. Cauliflower and his squad of guerilla platypus soldiers. After doing so, Ringo fled and took up residence in a garbage dumpster along with Oscar the Grouch. It is not known what happened to the eight Platypus soldiers involved, as their leader, Col. Cauliflower, the only survivor, disappeared shortly after the Treaty of Epstein was signed.

Beatlemania reached it's peak in 1964 when it was pointed out that both made amazing music and the Treaty of Epstein was signed, this didn't change anything. For the next six years silent war was raged between John and Paul, both now lacking their armies, and finally ended it in 1970 after a bitter battle over the last slice of a pepperoni-and-chocolate-syrup pizza. Any witnesses of Beatlemania who did not actually participate were hunted down and killed by Col. Cauliflower. For more information on the units used, see below.

Paul's fans, shortly before their demise.

The following content is information on the participants of Beatlemania.

John's army was made completely of them, most of them friends and relatives of Yoko Ono. Their main mode of attack was to screech as though they were the dying cows in George's Cavalry and call it singing, the results of this were an epidemic of earbleeds and septic shock, mostly affecting innocent fans who happened to come across it on the radio. This method failed to phase Paul's Fans, as most of them were too busy screaming and rolling around on the floor to listen.

They were what they were called; Paul's fans. Most of them were killed after they peed themselves screaming his name rather than listening to the music. Suffice to say, Paul never called them to back him up again.

These deadly warriors imported from Bangladesh were mounted upon mystical cows and carried scimitars, but were wiped out due to the inability to battle after George released an album of Hindu hymns and chants; they were cremated. Their ashes' current whereabouts are unknown, but it is probable that they have wound up in the Ganges River.

Although not actual platypuses, these men wore platypus costumes, as they were at one point The Platypus People at a failed theme park. They became assassins for a living. Col. Cauliflower also wore a platypus costume, but was distinguished by a Soviet fur cap. The soldiers numbers counted eight, including Cauliflower. Originally hired by Ringo to assassinate Pete Best, they were used in Beatlemania instead. Their whereabouts are unknown, if they survived the battle at all, since there is little documentation of what happened after Ringo fled the battlefield. Many believe they took refuge in Ringo's trash can and were subsequently eaten by Oscar the Grouch.